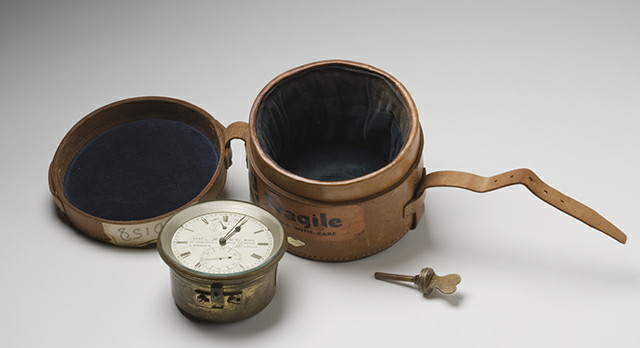 Friday 17 August 1906. The Galilee, once the fastest clipper on the Pacific Ocean and now a research vessel for the Department of Terrestrial Magnetism (DTM) on its second scientific voyage, lies on its side in Yokohama Harbour, the victim of a savage typhoon. On board is some of the latest scientific and navigational equipment, including four marine chronometers. By Saturday evening, the vessel was righted and all the equipment saved. One of the chronometers – Dent two-day marine chronometer No 53862 – is now in the collection of the National Museum of Australia. How did it get there?

Marine chronometers are precision timepieces capable of maintaining their accuracy under harsh climatic conditions. They are used to carry standard time (ie Greenwich Mean Time) at sea. The time difference between Greenwich, as provided by a marine chronometer, and the local time, as determined by celestial observation with a sextant, is used to determine a ship’s position at sea. This position is stated as a latitude (angular distance north or south of the equator) and a longitude (angular distance east or west of Greenwich).

The story of Dent marine chronometer No 53862 (D-53862), like that of many of its contemporaries, begins in the workshop of Joseph Preston and Sons in the small Lancashire town of Prescot. Prestons were premier chronometer-movement makers and supplied most of the leading chronometer-making firms of the time, including Mercer, Kullberg and Dent.

D-53862 was assembled in the London workshop of Edward John Dent using components manufactured by different craftsmen, including Prestons, between June 1903 and March 1905. The total cost of components was £12.18.5d which was just below the average cost for assembling Dent two-day chronometers at that time.

D-53862 was purchased by the DTM in May 1905 at a cost of $US170.80 thus beginning its long association with international scientific endeavour, both at sea and on land. At the time it was described as ‘running but had had bad treatment’. Thus, it needed overhauling before it could go to sea.

The Department of Terrestrial Magnetism was established by the Carnegie Institution of Washington in April 1904 to investigate Earth’s magnetic field around the globe, on land and at sea, through its own work and by supporting the work of others.

DTM’s ocean work included a magnetic survey of the Pacific Ocean, initially using the chartered vessel Galilee which made three voyages between 1905 and 1908 then, with their own purpose-built vessel Carnegie which made seven voyages between 1909 and 1929. Some of these voyages extended beyond the Pacific, including the first circumnavigation of the Antarctic, by the Carnegie in 1915-16. D-53862 was on eight of the 10 voyages, playing an important role in navigating the two vessels. D-53862 finished its life at sea with the return of Carnegie from its sixth cruise in November 1921. Henceforth, it was to remain on land, in the United States of America and in Australia.

D-53862 was issued to Watheroo Magnetic Observatory (WMO), 225 kilometers north of Perth in September 1925. The WMO had been established by the Department of Terrestrial Magnetism in January 1919 to complement the existing world network of magnetic observatories measuring Earth’s magnetic field.

It was about this time that D-53862 was removed from its timber case and placed in a round leather one.

We do not know much about D-53862’s role at Watheroo, but was probably similar to that of its contemporary – Kittel marine chronometer No 269 (K-269). In the 1950s and 1960s K-269, also removed from its timber case, was used to carry accurate time around the observatory. The procedure was recalled by retired geophysicist Peter McGregor in September 2006

…carry K269 to each of the 2 primary buildings and compare it with (a) another chronometer (name/no eludes me) in the magnetograph house, and (b) a Landis master pendulum clock in the Atmospheric Electricity building….

Perhaps the un-named chronometer he refers to was D-53862.

We do know that D-53862 was used on at least one land expedition in Australia as part of an investigation of Earth’s magnetic field. In September 1944, the DTM loaned it to Lew Richardson of the Australian government’s Mineral Resources Survey as a back-up for the original chronometer he had been issued with. Richardson travelled across southern Australia from Canberra to Perth and back, measuring Earth’s magnetic field at several fixed observation points on the way.

The DTM withdrew from geomagnetic work following WWII and Watheroo Observatory was transferred to the Australian Government on 1 July 1947. It was placed under the administration of the Bureau of Mineral Resources (BMR) but as priorities changed Watheroo was closed in 1959 and operations shifted to new observatories at Lake Gnangara and Mundaring, also close to Perth. It is likely that D-53862 went into retirement about this time, after three decades of faithful service to international science.

In 1986 this ‘most wonderful piece of mechanism’ was transferred to the National Historical Collection by the BMR as part of a large collection of geoscientific survey instruments, including five other chronometers and most of the equipment from Watheroo Magnetic Observatory.

Together with most of the chronometers in the NHC, D-53862 has recently received conservation treatment to ensure its long-term survival and readiness for exhibition when called upon. During this treatment the machine was completely dis-assembled and in the process further aspects of its history were revealed. The inscription ‘J.P. 53862’ on the movement confirmed its link to Joseph Preston whilst the inscription ‘W Nicholls Perth 1958’ shows that it was serviced by William Nicholls, a watch-maker of Hay Street in Perth, in 1958. This suggests that D-53862 may still have been in use in 1958, a year before Watheroo closed.

One further inscription – ‘Louis Weule  [8?] / Jan 8 1906’ – indicates that it was serviced by Louis Weule of Vancouver, shortly before it went to sea on the Galilee for the secondtime. Unfortunately, there is no mark to record its visit to the workshop of Charles & James Favre-Brandt for repair after the typhoon in August 1906.

Dent marine chronometer No 53862 is one of forty chronometers in Australia’s National Historical Collection. Collectively and individually they have many stories to tell about the chronometer-making industry, Australian maritime history and international scientific endeavour.