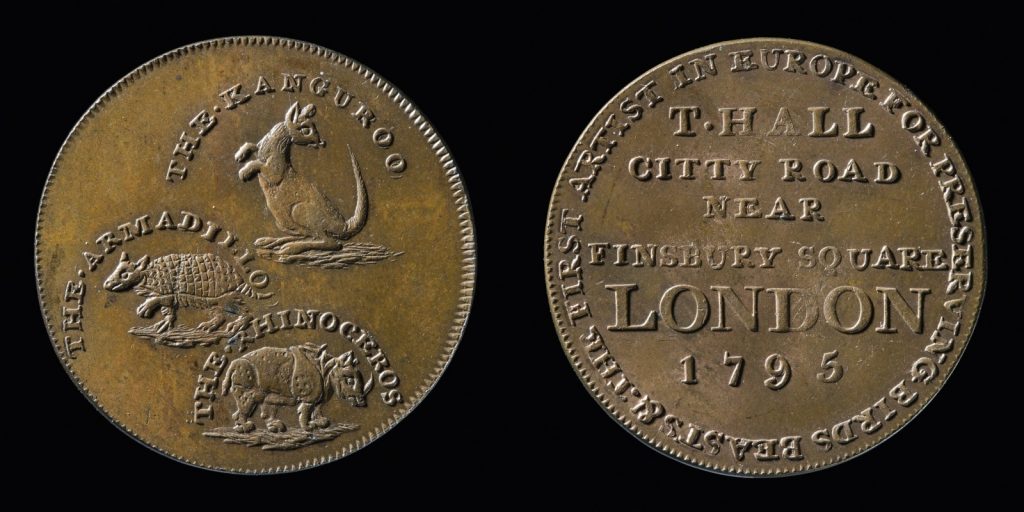 One of the Museum’s latest acquisitions is this late 18th century halfpenny token which features images of three exotic animals, ‘The Kanguroo, The Armadillo and
The Rhinoceros’. Thomas Hall, a taxidermist and curiosity dealer, produced these tokens to advertise his ‘house of curiosity’, otherwise known as the Finsbury Museum, which he operated from his home at 10 City Road, London. The token illustrates the fascination and curiosity shown by the British public in the late 18th and early 19th centuries to view exhibits of exotic animals, in particular the kangaroo from New
South Wales.
Hall proudly identified himself on the reverse of the token as ‘The first artist in Europe for preserving birds & beasts’ and even claimed in his advertisements that he could make ‘stuffed birds sing as if they were alive’. He exhibited all kinds of birds, beasts, fish and reptiles, and later, his adverts for travelling exhibitions mention the display of ‘human monstrosities’. The rhinoceros which appears on the token is reputed to have been prepared by Hall but it is unknown whether he was responsible for the taxidermy of the kangaroo or the armadillo.


Hall produced a number of tokens around the same time as the ‘Kanguroo’ token.
One featured a toucan with the text ‘To the curious observer of natural phenomena’.
The ‘White Negress’ penny featured an African woman standing in a long dress with
the words ‘Mrs Newsham The White Negress‘ around the rim and another featured
Sir Jeffrey Dunstan, Mayor of Garrat, who was employed by Hall at the Bartholomew Fair in the 1790s. Similar tokens to Hall’s were issued by private businesses across England towards the end of the 18th century to solve the shortage of currency for small-scale transactions.
It is not hard to imagine the curiosity surrounding the discovery of a creature such as the kangaroo – a species so unfamiliar that it defied description.

To compare it to any European animal would be impossible as it has not the least resemblance of any one I have seen. Its fore legs are extremely short and of no use to it in walking, its hind again as disproportionaly long; with these it hops 7 or 8 feet at each hop…

The first sketch of a kangaroo was drawn by Sydney Parkinson, the artist on Captain Cook’s Endeavour voyage. Parkinson was drawing from direct experience and observation of the animal, unlike George Stubbs who created the first painting of a kangaroo from an overstuffed kangaroo skin brought back to England by Sir Joseph Banks.

Before the advent of photography, the only way to portray the kangaroo was through creation of artworks and engravings which were then published in accounts of the colony. English artists worked from drawings and specimens sent from the colony and as a result early images often showed a lack of understanding of the Australian environment. The kangaroo pictured in Woodthorpe’s illustration (below right) is eating acorns and appears with twin joeys in its pouch.


The first public display of a preserved kangaroo in London was in 1789. It was presented firstly as a public spectacle in a concert hall near Haymarket, then later displayed at the Leverian Museum. By the mid-1790s, live specimens became major attractions in travelling menageries.
The token is on display in the Sydney exhibit of the Landmarks gallery at the National Museum of Australia.
Feature image: Entry token to Thomas Hall’s London Zoological Exhibition, 1795
Photo by Jason McCarthy