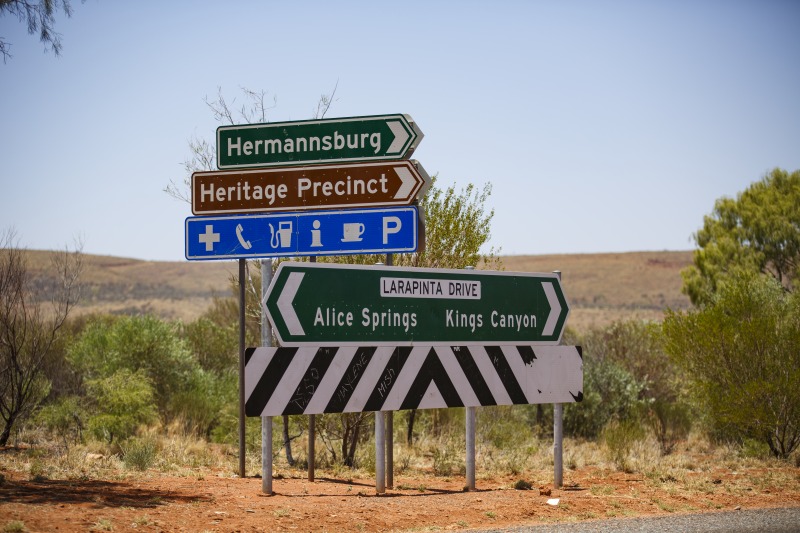 The landscape of Central Australia has attracted millions of visitors since the area was opened to tourism, most notably following the extension of the railway line to Alice Springs in 1929. Where the local Aboriginal communities were displaced and banned, they are now leading conversations about land management and tourism. The watercolour paintings of celebrated Western Arrarnta artist Albert Namatjira have transported generations of Australians into his country, west of Alice Springs across the West MacDonnell Ranges, and today Namatjira’s descendants and kin continue to use their art to create opportunities and keep their culture strong.

These stories are being remembered and shared in a new exhibit about Ntaria (Hermannsburg), as part of the Landmarks gallery at the National Museum of Australia, from 28 July 2016.

Warning: Readers should be aware that this article includes images and names of deceased people that may cause sadness or distress to Aboriginal and Torres Strait Islander peoples.

The first European visitors in Central Australia were explorers and surveyors. John McDouall Stuart completed a north-south crossing of the continent in 1862, passing through the centre of what would become the Northern Territory. He created detailed maps and named many features in the landscape, with his route forming the basis for the construction of the overland telegraph line and subsequently the development of settlements and services.

Pastoralists and their cattle soon followed the line into Central Australia, taking up pastoral leases based around the rivers and natural springs recorded by Stuart. From 1872, the Alice Springs Telegraph Station became a hub of activity for the scattered European population. A small settlement named Stuart developed nearby, long better known as, and renamed Alice Springs in 1933. More visitors and some permanent settlers arrived during the 1880s following the discovery of gold at Arltunga, west of Alice Springs.

In 1877, the Lutheran Synod of Australia and the Hermannsburg Missionary Society established Finke River Mission west of Alice Springs, on the traditional lands of the Western Arrarnta (Aranda) people. The immigrant missionary party, led by pastors Kempe and Schwarz, chose a site known to the Arrarnta as Ntaria for their settlement, which they named Hermannsburg.

From 1910 government legislation forced most Aboriginal people to live on missions or reserves. Others chose to live in camps nearby following the disruption of their traditional lifestyles. Hermannsburg’s population grew to include people from Western, Southern, Northern and Central Arrarnta, Luritja and Pitjantjatjara language groups. After first suppressing traditional activities, the missionaries, developed an interest in Aboriginal culture, recording local languages and stories, and collecting artefacts, often in association with visiting researchers, anthropologists and collectors.

The missionaries farmed sheep and cattle with the assistance of Arrarnta men and women, but struggled to establish a viable pastoral station through prolonged periods of drought. After the devastating 1926-29 drought, visiting artist Violet Teague helped raise money to fund the construction of a pipeline from nearby Kuprilya (Kaporilja) Springs to secure water supplies for Hermannsburg.

During the 1930s Pastor Friedrich Albrecht implemented programs to expand evangelism, education, industry and employment opportunities. A tannery was constructed to supply a range of leather and animal hide products, which along with local woodwork, needlework, and traditional weapons and tools were sold to a new tourism market brought to the region by the extension of the railway to Alice Springs.

Albrecht considered Western Arrarnta man Albert Namatjira to be the most talented maker of mulga wood plaques. Born at Hermannsburg in 1902, Elea, later christened ‘Albert’, attended the mission school until his traditional initiation at the age of 13. Albert worked as a blacksmith, stockman, cameleer and, briefly, as an evangelist, before making souvenirs for sale at the mission.

In 1932, artists Rex Battarbee and John Gardner visited Hermannsburg. According to Albrecht, on seeing the works of Battarbee and Gardner, Albert told him ‘I think I can do that’, and during Battarbee’s subsequent visits in 1934 and 1936, he tutored and encouraged Albert to paint landscapes in watercolour. In 1937, three of Namatjira’s watercolours were included in an exhibition of Battarbee’s paintings in Adelaide, and in 1938, Namatjira’s first solo exhibition of watercolours was held in Melbourne’s Fine Art Society Gallery. To meet European conventions, Albert took his father’s name, Namatjira, as his surname when signing his work.

Within a decade, Namatjira was famous, meeting the Queen during her 1954 visit, and seeing his works sold nationally and internationally, and then reproduced extensively. His fame increased public interest in Central Australia.

After the Second World War, the tourism industry developed rapidly. Romanticised ideas of the isolated ‘Centre’ were popularised in films such as The Overlanders, Jedda, and A Town Like Alice, at the same time as Alice Springs became less isolated, with travel more comfortable on improved roads and an increase in scheduled flights and train services.

In 1951, 16-year-old Barrie Hadlow travelled to Central Australia with a group of students on a Melbourne Grammar School ‘holiday tour’. The group flew from Melbourne to Alice Springs, and then travelled by bus through the West MacDonnell Ranges, visiting Standley Chasm, Finke Gorge and Palm Valley, Simpson’s Gap and Hermannsburg. He purchased a number of souvenirs, including a boomerang, and took photographs during his journey, returning for another holiday in the late 1950s.

In 1962, nurse Patricia Ketchell flew to Alice Springs and joined an organised bus tour, visiting Hermannsburg and Uluru. At Hermannsburg she purchased a watercolour painting by Oscar Namatjira, son of Albert, and a kangaroo skin mat, one of a list of items available for purchase from the mission store. All of her souvenirs were proudly displayed in her home, until they were purchased by the Museum at auction in 2015.

Both Barrie and Patricia remembered their journeys to Central Australia fondly, having taken a keen interest in the Aboriginal cultures that they encountered, and purchasing souvenirs directly from Aboriginal people during their travels.

In 1982, Ntaria and surrounding lands were handed back to the traditional owners, creating five separate land trusts that manage the former Hermannsburg mission lease area.

Albert Namatjira died in 1959, but his work and story are still a major draw card for tourists. The road from Alice Springs to Ntaria is now bitumen, and is visited as part of tourist circuits through the West MacDonnell Ranges (Parta Tjurritja), to Kings Canyon and Watarrka National Park, and Uluru. The Hermannsburg Historic Precinct preserves the mission buildings and the stories of its founding and operation until the 1970s, and includes a gallery dedicated to Namatjira and the work of the Hermannsburg School of Art that he founded.

Today Ntaria is known as a centre for Aboriginal art and music, as Namatjira’s descendants and kin continue his legacy, working in watercolour, acrylic, pottery, song and film to tell the stories of their country.

The boomerang and mat, along with other objects, will be displayed in the new Ntaria exhibit, part of the Landmarks gallery at the National Museum from 28 July 2016.