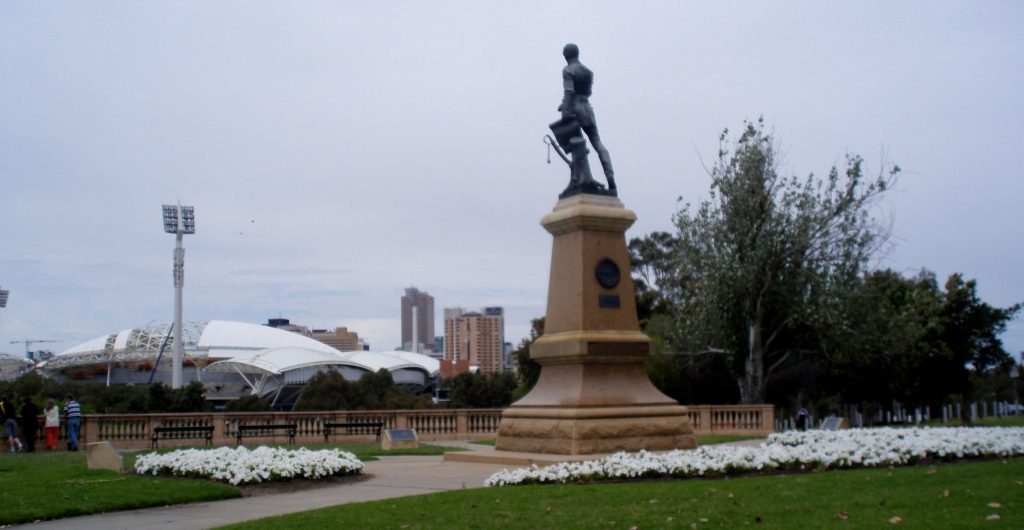 As the second Ashes test on Australian soil for the 2013-14 series begins in Adelaide tomorrow, I wonder what Colonel Light would think of the growth of his city and in particular the re-development of Adelaide Oval. Since 1938, the statue of Colonel Light has watched over the city of Adelaide, perfectly positioned on Montefiore Hill. The view towards the city, with Adelaide Oval in the foreground, is known as Light’s Vision and has for many years featured on postcards and promotional shots of Adelaide. Recent discussions in Adelaide have suggested that perhaps the statue should be moved as Light’s view of the city is now dominated by the new stands of Adelaide Oval.

Regardless of opinions in relation to the positioning of Light’s statue and his view over Adelaide, there is no question about his importance in the foundation and design of the city of Adelaide. Colonel William Light arrived in South Australia on board HMS ‘Rapid’ in August 1836. Appointed Surveyor-General of the new colony of South Australia, his instructions were to explore and survey the coast of South Australia and select a suitable site for settlement. Light, Deputy-Surveyor George Strickland Kingston and a team of assistant surveyors, including a sixteen-year-old draughtsman, Robert Thomas, began the task of surveying the area. Light identified the site for Adelaide and proceeded to design a modern city inspired by European cities he had visited on his travels. The original plan was drawn by Thomas using watercolour and ink, and was used by the Colonial Commissioners to promote property sales around Adelaide. It is held in the collections of  the Migration Museum in South Australia. The significance of the plan was recognised in May 2013 when it was added to UNESCO’s Australian Memory of the World Register of Significant Documents.

The National Museum of Australia has recently acquired a lithograph of Colonel Light’s ‘Plan of the City of Adelaide’, which will be included in the Adelaide exhibit in the Landmarks gallery in mid-2014. The lithograph was reproduced as an appendix to a parliamentary report titled: ‘Second Annual Report Of The Colonization Commissioners For South Australia To Her Majesty’s Principal Secretary Of State For The Colonies. 1837′.

Light’s design included a symmetrical grid layout of streets surrounded by parklands, with land allocated for public buildings and recreation. The River Torrens divides the map into two distinct areas, the city of Adelaide and North Adelaide. The site of Adelaide to the south of the River Torrens was reasonably flat and lent itself to a grid-like structure, with the streets orientated north to south and east to west. The design included 700-acre lots and incorporated five squares, the largest being Victoria Square, positioned in the centre of the city. The design for North Adelaide included 342-acre lots and one square, with the orientation of the streets adjusted to allow for the contours of the site. In addition to showing the acre allotments, the plan shows the positions of Government House, the Barracks, Hospital, Cemetery, School, Store House and the Market.

A study of the street names and squares of Adelaide unveils the history of the settlement of South Australia, for example, Wakefield Street is named after Edward Gibbon Wakefield, whose theories of systematic colonization formed the basis of the idealistic colony. Along with Wakefield, appear the names of men who were key players in the establishment of the colony and the early settlement of the Adelaide area: Robert Gouger, Robert Torrens, George Fife Angas, John Hindmarsh, Osmond Gilles, John Morphett, James Hurtle Fisher, to name a few.

The re-development of Adelaide Oval has retained the heritage listed scoreboard, the Moreton Bay fig trees, the hill and views to the spires of St Peter’s Cathedral in North Adelaide. The ground will never be the same again, but hopefully this test match will go in our favour and the Australian cricket team will continue in their fight to regain the Ashes. So, tomorrow, when the test match begins, Colonel’s Light’s statue will again witness history in the making from his prime position on Montefiore Hill. Depending on how you view the transformation of Adelaide Oval, it could be argued that perhaps he has the best seat in the house!