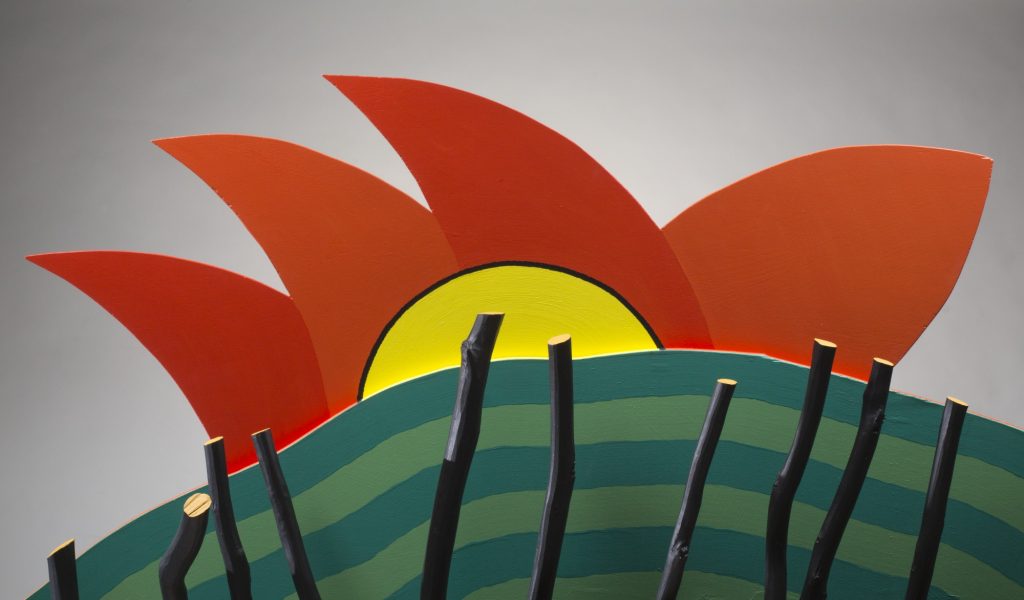 ‘Time flies’, the proverb proclaims, and indeed it seems a year could not possibly have passed since the Sydney Opera House celebrated its 40th birthday and we commemorated the occasion with a blog post highlighting the landmark and the Museum’s purchase of two very rare protest posters associated with Jørn Utzon’s dismissal from its construction.  Yet today, the iconic cultural centre yet again marks its birthday – this time with significantly less fanfare than last year’s milestone warranted – and we, with unexpectedly impeccable timing, are again able to announce an exciting development to mark the occasion.

The development that I boast of is the recent installation of a monumental artwork titled ‘Bennelong had a Point’ in the Bennelong Point exhibit of the Museum’s Landmarks: People and Places across Australia gallery.  Commissioned by the Museum in 2012, the striking sculpture was created by urban Indigenous Australian artist Black Douglas (a.k.a. Adam Hill) and Hugh Ramage. A Sydney-based painter, cartoonist, illustrator and keen advocate of social justice, Douglas engages directly through his work with the political conditions of Australia’s contemporary Indigenous society, creating dialogues about colonisation and assimilation.

In ‘Bennelong Had a Point’, Douglas references Indigenous understandings of Bennelong Point – originally the home of the Gadigal People of the Eora Nation – as a contested site symbolising Aboriginal dispossession. In the process, the peninsula’s most famous modern resident – indeed the one its identity has become synonymous with – is unmistakably referenced and not spared reinterpretation. According to Douglas, the iconic Sydney Opera House personifies ‘the very ethic of the British Colonial… The structure is ‘white’, it’s large and bold … and it “juts out” as if the bow of a tall fleet ship’.

In the sculpture, the referenced sails of the Opera House loom over painted branches and a blue gum block that recall the bush that once covered the greater Sydney region, while the contour-like designs reference the ceremonial carvings (dendroglyphs) made on trees. The shelled box evokes shell middens and shellwork souvenirs sold by Aboriginal women at La Perouse, Botany Bay, in the 1880s.  And the Aboriginal ‘Neville and Nolene’ figures, typical of those found in suburban gardens around the time the Opera House was completed, represent ‘a form of token material sentimentality’ that Douglas compares to the naming of Bennelong Point after an Aboriginal man who had actually spent a good part of his life elsewhere.

The man he of course refers to is Woollarawarre Bennelong, an Aboriginal man who served as an interlocutor between the colonists and the Eora. Having helped the newcomers learn his people’s customs and language, in 1790 Bennelong asked Governor Arthur Phillip to build him a house on the peninsula, which at the time was known as ‘Limeburner’s Point’.  In view of the assistance he had rendered, Phillip readily obliged Bennelong’s request and the peninsula became known as Bennelong Point.  Within two years, however, Bennelong left Sydney with Phillip for Britain and the house, which had become a gathering place for Aboriginal people, was demolished by settlers.

A physically imposing sculpture, ‘Bennelong had a Point’ makes for a powerful statement in the Bennelong Point exhibit and will undoubtedly capture visitors’ attention – just as it did that of the Museum staff tasked with its installation. Involving the Museum’s Conservation, Registration, Exhibitions and Curatorial sections, the move and positioning of the 2 meter wide, 160kg sculpture was an exercise in preparation and precision, as was the reinstallation of the 180kg mooring chain that had been de-installed in preparation for its arrival. Dating from 1795 and excavated from the banks of Bennelong Point, the chain includes a section of the sandstone landmass that the Opera House now inhabits and is on loan from the Australian National Maritime Museum.

A bright and multifaceted new jewel in the refreshed Bennelong Point exhibit, ‘Bennelong had a Point’ joins other Museum objects already on display, including a plaque presented by the Government of NSW to commemorate the official opening of the Sydney Opera House and a black and white photographic postcard of Circular Quay with artist’s impression of the Sydney Opera House.