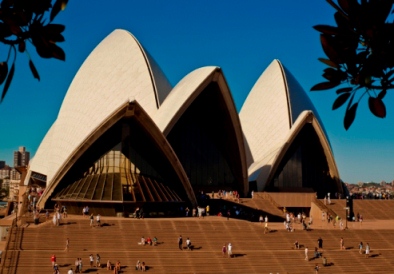 “The Opera House will have something the pyramids never had – it will have life. They were built as tombs, but this building is built to give happiness and refreshment to millions.”   – Queen Elizabeth II speaking at the opening of the Sydney Opera House, 20 October 1973
The Sydney Opera House turned 40 this month and observing its jubilant birthday celebrations, it is hard to imagine a time when it was not Australia’s favourite building, an international icon of our nation and the architectural envy of the world.
When it first opened to the public in October 1973, however, this extraordinary structure had been widely regarded as a proverbial thorn in the side of the New South Wales government, the engineers tasked with resolving its various construction challenges and the Australian public, who had grown impatient with its escalating costs and delayed completion.   Nevertheless, not even its early critics could deny the fledgling
building’s iconic appeal.
The man widely blamed for its myriad of problems, yet gradually more frequently lauded as its enlightened creator, was a young Danish architect named Jørn Utzon – the winner of an international competition to design Sydney’s new performing arts centre.  The building was to be Utzon’s grand entrance onto the international stage and his design, based around a series of large sculptural sails, was pioneering and ambitious, and initially also appeared relatively cost-effective.
As the building began to take shape, however, its construction became beset by technical challenges associated with bringing Utzon’s grand vision to life.  Innovative solutions had to be conceived and revisions implemented, resulting in successful collaborations with some of the world’s leading construction companies, but also schedule and cost blowouts that fuelled public debate and discontent.  In 1966, seven years into the build, it all came to a head and major controversy erupted when Davis Hughes – the new Liberal state government’s Minister for Public Works – withheld Utzon’s payments and effectively brought about the architect’s resignation.   Utzon immediately left Australia, never to return.


By the time Utzon departed, the building’s characteristic ‘sails’ had almost been completed, however Hughes had stopped work on the planned plywood interiors and appointed a panel of local architects, with Peter Hall at the helm, to complete the project. In response, a group of Sydney architects began a sustained campaign to mobilise public support for Utzon and persuade the state government to bring him back on the project.  The ‘Bring Utzon back’ campaign organized a public rally at Sydney Town Hall that attracted over 1000 protestors and an impressive line-up of speakers, including Harry Seidler and Patrick White; as well as petitions that were widely supported by many prominent architects, Sydney Symphony Orchestra musicians, and even staff at the Government Architect’s Branch of the Public Works Department.  The group also pasted up protest posters – calling for Utzon’s reinstatement – all over Sydney, including on the doors of the Sydney Opera House site office, which were eventually either covered up or torn down.
Luckily, a small number of the posters escaped use in the campaign, surviving in great condition to this day, and recently two of these incredibly rare pieces of ephemera were acquired by the National Museum.  Both these two posters were designed by architect John Kinstler and his interior designer colleague, Karen Herrle, effectively in direct conflict with their employer, the Government Architect’s office.  Made using printing blocks salvaged from the Government Printing Office and silk screen-printing frames designed and prepared by Kinstler, the posters were also printed by him, as well as fellow architects Bill Turner, May Watson, Ted Mack and Grahame Crocket, at their Sydney homes.  The graphic rectangular poster simply, though elegantly, repeats the campaign motto, while the square poster is more elaborate and features a declaration of support for Utzon’s reinstatement by various well-known international architects.  Inscribed around the edges of the poster, their public declaration states:
‘The outstanding Sydney Opera House can only be successful [sic] completed by Utzon himself. The destiny of this important work lies in your hand. The undersigned ask you to reconsider your decision. Appeal to the Australian Government by the world’s most famous architects. The world is deeply concerned that Jørn Utzon be dismissed as architect in charge.’
By late 1968, the protest campaign lost momentum as it became evident the government was determined to keep Utzon out of the project, despite his stated willingness to return and work in collaboration with Hall.  The surviving posters continue to resonate, however, with the conviction and passion of the campaign and were acquired by the Museum to tell the story of this fascinating chapter in the life of the Sydney Opera House.  While no concrete date is yet set for their display, they are a prized addition to the Museum’s collection and are likely to feature in the Bennelong Point exhibit of the Museum’s Landmarks: People and Places across Australia gallery in the not too distant future.  Other Museum objects already on display as part of this exhibit include a plaque presented by the Government of NSW to commemorate the official opening of the Sydney Opera House and a black and white photographic postcard of Circular Quay with artist’s impression of the Sydney Opera House.  Next year, they will be joined by ‘Bennelong had a point’ – a monumental artwork by Australian Indigenous artist Black Douglas (a.k.a. Adam Hill) and Hugh Ramage.

While public and critical opinion on the merits of the Sydney Opera House was divided during its fourteen year construction and for some time after its opening, the official ceremony held to mark its opening did not disappoint.  Fifteen thousand spectators and two thousand water craft turned out on 20th of October 1973 to watch Her Majesty Queen Elizabeth II finally declare the building opened.  Another three million watched on around the world in front of their television screens.  The opulent celebrations included a flypast of nine RAAF FIII bombers and release of 60,000 multi-coloured balloons, while the official launch was marked by four tugs pulling 16 pink ribbons from the peaks of the white roof shells amidst 45 knot winds.
Notably absent from participation or mention in the celebrations, however, was Jørn Utzon, who had missed out on an invitation to the opening of the building that he had conceived, partially brought to fruition and which always remained his most important achievement.  Decades later, Utzon managed to reconcile with the Sydney Opera House Trust and in 1999 was re-engaged as Sydney Opera House architect to develop a set of design principles, which reflect his original vision, to act as a guide for all future changes to the building.  A result of this was the 2004 refurbishment, overseen by Utzon, of the reception hall that is now known as the Utzon Room – the first Utzon designed interior of the Sydney Opera House.  The previous year, his work on the building had earned him the coveted Pritzker Prize, international architecture’s highest honour.
Forty years on from its official birth, and the birthday celebrations for the Sydney Opera House are again patroned by royalty, though this time Queen Elizabeth II has been replaced by Denmark’s Crown Princess Mary and Crown Price Frederick – symbolically representing Australia’s contemporary union with Denmark that was forged decades ago by their visionary countryman.  Jørn Utzon passed away in 2008, having never seen the building completed, but in attendance at the birthday celebrations are his daughter Lin and architect son Jan, who tells reporters that his father would be proud, while throngs of well-wishers, many waving Danish fans, clap and cheer.  It is all part of a month-long calendar of events, held throughout October, that includes a large concert featuring performances by the Sydney Symphony Orchestra, Opera Australia and Sydney Philharmonia Choirs.
Since its opening, the Opera House has become the busiest performance centre in the world and been inscribed on UNESCO’s World Heritage List, with architectural opinion worldwide united in the belief that it is a modernist masterpiece.  Even the black mark of its blown out construction budget, which came in 14 times over the original estimate of $7 million, has been erased with some encouraging birthday arithmetic.  Commissioned by the Sydney Opera House Trust, the number crunchers recently declared that the Opera House will be worth A$4.6 billion to the Australian economy over the next 40 years, and has already injected around A$775 million into the economy every year.  All the bad blood and controversy of its formative years now seem like water under the bridge.  Or under the Opera House…  But the bold ‘Bring Utzon back’ posters help us remember the full story.

(Feature image) The forecourt of the Sydney Opera House, which has hosted countless national events, including the building’s opening by Queen Elizabeth II in 1973 and its 40th birthday celebrations this October. Photo by Dean Golja, National Museum of Australia.