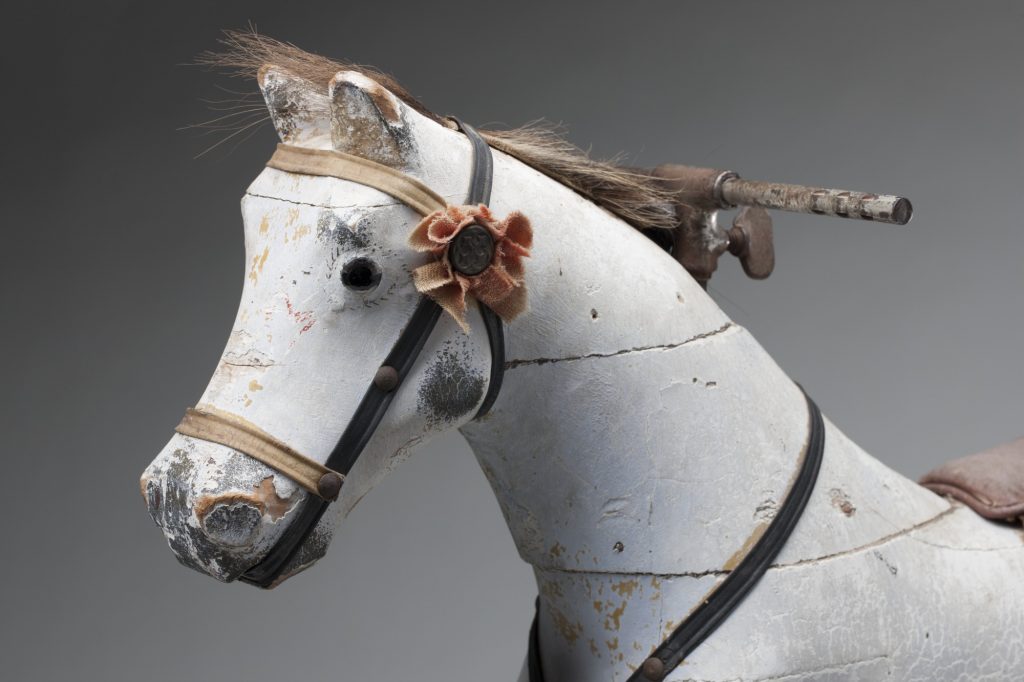 The Museum recently acquired a single family’s impressive collection of nearly 350 toys and we are marking the arrival with the display of one of the most beautiful pieces in its number – a 1920s horse tricycle. The trike, like the rest of the toys in the Susan and Andrew Gibson collection, belonged to a single generation of children in whose memory the collection was donated and named – the enviable sibling duo, Susan and Andrew Gibson.

Susan, born in 1922, and younger brother Andrew, born 1925, spent their early years absorbed in imaginative play at their parents’ pastoral property near Goulburn, NSW. Known as Burrungurroolong, the property had been farmed by the extended Gibson clan for close to a century, but only became home to the young family when Norman Gibson (the children’s father) purchased it from his brother Andrew Campbell Gibson in 1926.  The move to Burrungurroolong signalled the start of a life surrounded by family, as their Faithfull and Gibson relatives owned the adjacent properties, Springfield and Tirranna.

Born and initially raised in the urban environs of Sydney, Susan and Andrew quickly immersed themselves in the sprawling property, which provided ample outdoor entertainment for both children and adults alike. There were the extensive gardens – lovingly tended by parents Norman and Jill – to hide away in or explore, as well as waterways – such as the Mulwaree Ponds at the base of the garden – which the children occasionally took to in the buff, and later in canoes and a rowing boat.  Also attracted by the property’s ponds were fowls and ducks, who called Burrungurroolong home.  Clearly they sensed it was an animal-friendly zone, as they shared the property with the Gibsons’ menagerie of pets that included guinea pigs, lambs, horses and even a bantam that Susan often carried with her.

The horses, in particular, played a central role in life at Burrungurroolong. Having for decades played host to the annual Tirranna Picnic Races ball, the property also permanently hosted a variety of horses for transport and racing, as both Jill and Norman were excellent riders.  Susan and Andrew, like many young children who grew up on isolated properties and stations, both learned to ride on the family’s ponies from a young age.  When Susan’s parents later realised that she was afraid of horses, they permitted her to stop riding, however Andrew grew into an excellent horseman and became a vet, as well as being actively involved in the local pony club and show society.  Susan’s fear of horses did not appear to diminish the siblings’ fascination with horse-themed toys, however, which were very popular at the time and no less so among the Gibson children, who counted hobby horses, a rocking horse, horse miniatures and the horse tricycle among their collection.  The tricycle, thought to have been made in Australia in the early 1920s, indeed seems to have been preferred by Susan, as she is the one pictured riding it in three photographs provided by the family to the Museum.

Beloved pets and the surrounding environment clearly played an important role in Susan and Andrew’s childhood, however it was the collection of toys and playthings that their fun and games centred around. Amassed through the generosity of their wealthy parents and childless relatives, it encompassed a seemingly endless array of dolls, soft toys, costumes, boats, planes, miniature figurines, bikes, a dolls house, a tin fort and much, much more.  The dolls, numbering 60 in the acquired collection but probably higher in the siblings’ full compendium, were a particular favourite of Susan’s, as evidenced by the sewing machine and many dolls clothes – the majority of which she made – in the collection.  As expected, most of the toys show evidence of extensive use, however some, including many of the dolls, are in fine condition.

Represented by the diverse collection acquired by the Museum, Susan and Andrew’s toys originate from early in the era of mass toy and toy brand production that began in the late 1800s. Comprising examples of the best toys then available on the market, including both local and European brands, the collection was preserved largely intact by the family. A time capsule from its decade of use in the 1920s and 30s, it provides a rich insight into childhood and the nature of play in that period.  The new acquisition also complements the Tirranna Race Club collection, likewise donated by the Gibson family, which comprises photographs and documents related to the Tirranna Race Club; the Springfield – Faithfull Family collection, which comprises about 1550 artefacts from adjacent Springfield station; as well as the Museum’s toy holdings, such as the sixty-eight bush toys made by Arrente artists in the Liesl Rockchild collection.

Suffice to say, the Susan and Andrew Gibson collection is a feather in the Museum’s proverbial cap, so please join us in celebrating its arrival by visiting the handsome horse tricycle that, as of this morning, is on display in the Museum’s dedicated New Acquisitions Case (located opposite Circa on the way through to the permanent galleries). You will find him there – peeking out from his case, seemingly waiting to be animated by an enthusiastic child – until the end of September this year.

The horse tricycle is however not the last that you will see of the Gibson collection, as its immense diversity, strong provenance and joyful spirit mean that it has become somewhat of a favourite among curators working on upcoming exhibitions. The team working on the Horses in Australia project, which encompasses the exhibition Spirited: Australia’s Horse Story (opening 11 September), have snapped up many of the horse-themed toys – including the 1929 wooden rocking horse, as well as 1920s miniatures of a horse and cart and a hunting party.  The team working on the Cycling in Australia project, which encompasses the touring Freewheeling: Cycling in Australia exhibition, have likewise fallen for the collection’s charms and chosen from it a well-loved blue tricycle.  Both teams are using their selected objects to illuminate children’s first experiences with their chosen mode of transport, such as the sense of fun and newfound independence that they afforded their budding riders, and that is surely something we can all identify with and fondly recall when we spot the poignant Gibson toys upon visiting those upcoming exhibitions.