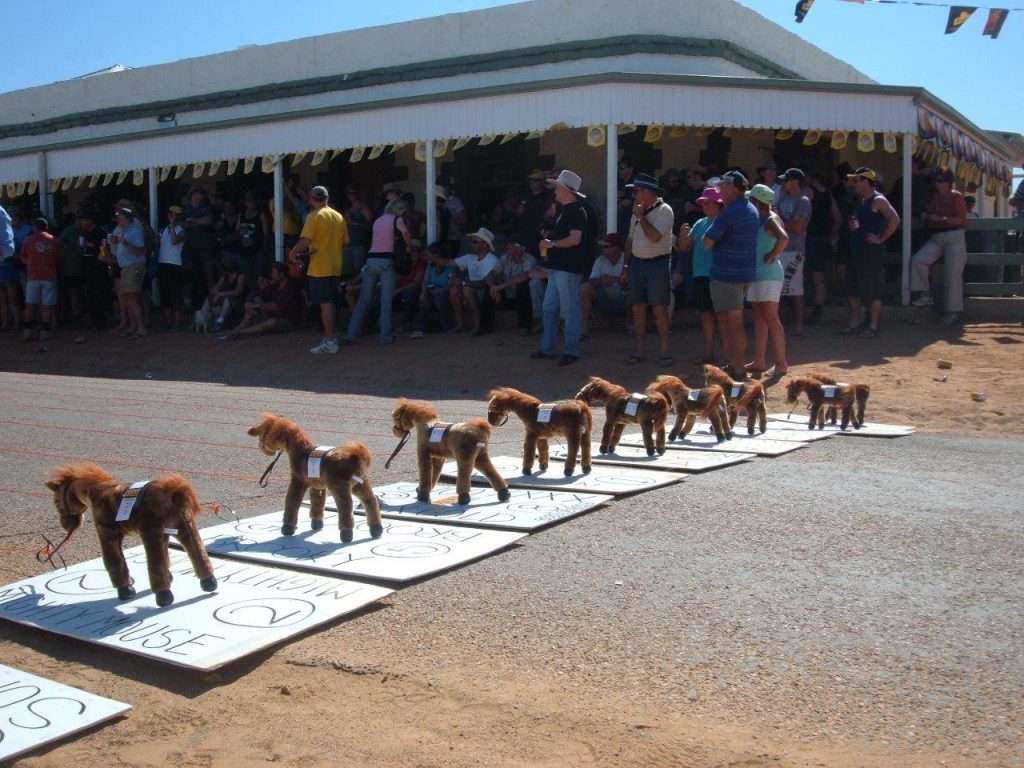 There’s a new horsey face to be seen around our Mitchell repository this week. This champion racehorse is a bright chestnut with polished hooves, silky mane and tail and something of a beady-eyed stare. Though unrivalled on the track, he’s a diminutive fellow at not quite two hands high. ‘Jackson’ arrived recently from Birdsville, a small Queensland town some 1600km west of Brisbane and the scene of his trackside triumph.

Starting life as a fairly average soft toy manufactured for a child, Jackson’s luck changed dramatically in 2007. His brief fame was prompted by what could have been one of the most devastating events to occur in Australia’s horse-related history.

In August 2007, Australia’s horse owners watched in growing consternation as a number of cases of Equine Influenza (EI) were reported across the country. Previously unheard-of in Australia, the spread of the acute viral disease potentially posed a significant threat to all professional and recreational horse industries. Although usually not fatal to otherwise healthy animals, the respiratory infection was highly contagious within the equine population. Infected animals needed quarantined rest to recover, inevitably severely impacting on all manner of professional livelihoods and curtailing all recreational riding.

The Australian government and CSIRO’s Australian Animal Health Laboratory (AAHL), immediately launched a nationwide response aiming to examine and contain the virus. Despite initial hopes that Birdsville’s isolated location would secure an exemption, a nationwide ban prevented the movement of all horses across the country, included those intended to run for the 2007 Birdsville Cup.

This was a blow for Birdsville. Established in 1882, the races had long been a popular gathering for local pastoralists and others from the surrounding district. As the most beloved sport of colonial Australia, race meets proliferated in urban New South Wales and Victoria, and country or ‘picnic’ races soon became the highpoint of the rural social calendar. By the end of the twentieth century, Birdsville was a well-known stop on the outback tourist trail. Every September, thousands of racegoers and other travellers dramatically swell the town’s resident population. Off the track, much of the activity centres around the town’s iconic 1884 hotel and the tent cities that surround the airstrip.

Despite the cancellation of the 2007 races, several thousand visitors were nonetheless expected to descend on the small town. As Jo Fort of the Birdsville Hotel explained, ‘we had to think of something to entertain the crowd!’ Hailing originally from a shop in Longreach, Jackson and several of his equine buddies were purchased by Jo in anticipation of the festivities. Birdsville residents quickly arranged for a plethora of alternative amusements including wheelie bin races, sideshows, a boxing tent, dances and several mock races featuring toy horses in the main street outside the hotel.

As a contender, Jackson was securely mounted on a piece of plywood using cable ties. The idea was that each diminutive racehorse could be hauled along the length of the main street via a length of rope. At the other end of the track, the ‘jockey’ able to wind the rope around an empty beer can in the speediest time was declared the victor. By all accounts, celebrations ensued and despite the absence of full-size equine attendees at the 2007 Birdsville Races, a good time was had by all.

Just under twelve months after the first case of EI was identified, the AAHL was able to announce that Australia was officially free of the infection. Further procedures are in place to manage any future re-emergence of the sickness in the horse, mule or donkey population. This is a major achievement by Australian scientists and marks a successful collaboration between federal and state governments, veterinarians and industry partners.

And Jackson? The perky little racer spent a few years mulling over the glory days whilst on display in the Birdsville Hotel, before finding his forever pasture here at the Museum. For us, he demonstrates the way the racing community adapted with good humour to the restrictions imposed by EI, and coped at a time of very real fear concerning the future of horse-racing and other equine activities in this country. Our visitors will be able to spot Jackson enjoying a bit of down time in our forthcoming exhibition opening in September this year.