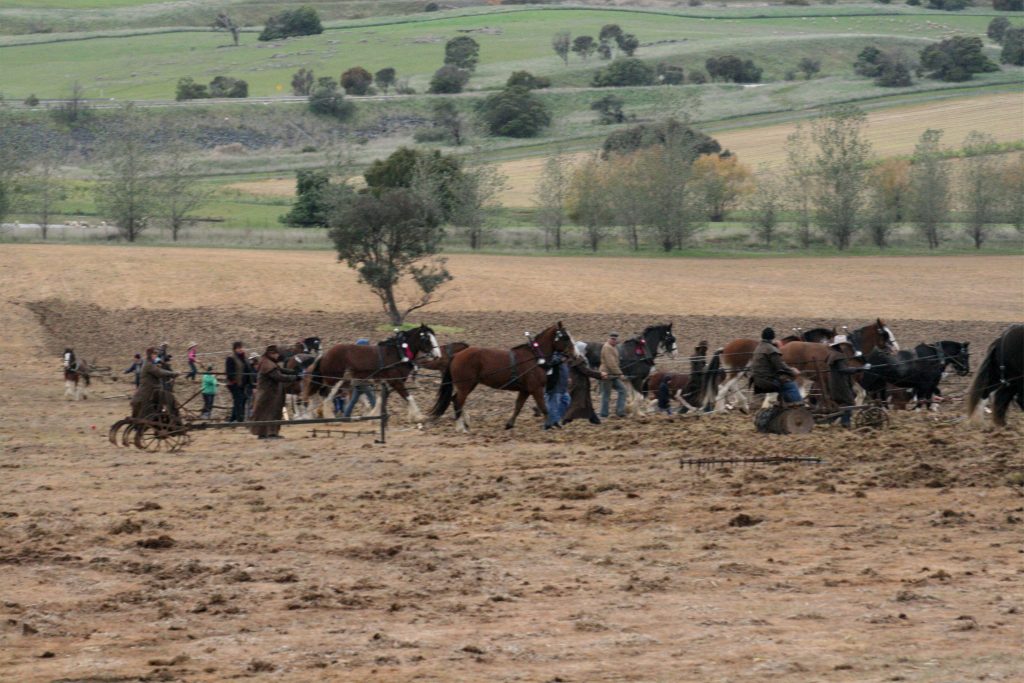 On a cold and windy day, the National Museum’s ‘Horse team’ were amongst thousands of people gathered to witness history in a paddock at ‘Willow Vale’, just outside of Yass, New South Wales. An initiative of the Yass Antique Farm Machinery Club Inc, ‘Woo back!’ hosted 28 horses and their humans to set a Guiness World Record for the most heavy horses ploughing in one field. It was an enthusiastic celebration of the contribution of equine muscle to Australia’s agricultural history, allowing a new generation to see horse drawn ploughs in action.

Participants had travelled from across New South Wales, and from as far afield as Victoria and Western Australia. The horses were groomed and harnessed to their farm implements, then lined up to start their work. After speeches and renditions of Amazing Grace and Advance Australia Fair, the bell rung and ploughing commenced. Although the damp conditions had softened the ground, we could see the breathing fog of the horses as they strained to pull the ploughs and scarifiers across the field, many not used to the work.

The new record was set without too much trouble, and the horses continued in their work, crossing the field several more times to present a fine exhibition of ploughing for the large crowd. Many spectators stayed on after the ploughing event to enjoy opportunities to meet some of the horses, view displays of historic machinery and visit a collection of stall holders. Amongst the tents were the team from Heavy Horse Heaven, a small not-for-profit charity that has to date rescued or rehomed 27 unwanted horses. One of their rescued horses was amongst crowd.

The event was a wonderful reference back to the ploughing competitions of the late nineteenth and early twentieth centuries, when such scenes were common in communities across Australia. Records suggest that the first horse drawn plough was used at Elizabeth Farm, the home of John and Elizabeth Macarthur, in 1795.

Horsedrawn ploughing matches were popular in the 19th century. Competitors ploughed an area within a set time and were judged on the straightness and evenness of their furrows. As a forerunner to today’s agricultural shows, ploughing competitions grew from small exhibitions to display the efficiency and strength of horses and machinery, into community festivals marked by an annual holiday and celebratory dinner at which the winners of the contest were toasted and presented with prizes.

The National Museum holds several ploughing competition medals in its collection, including the Coleraine Farmers’ Society medal won by James Ferrier and the Aldinga Annual Ploughing Match medal won by John Bennett. These stories will be part of the new exhibition ‘Spirited: Australia’s Horse Story’ to open at the Museum in September.

As the crowd dispersed, it was interesting to think that this new world record might initiate a new generation of ploughing competitions as others try to beat the 28 participants of ‘Woo back’.

Feature image: Off the mark – participants begin their ploughing record attempt at ‘Woo back’, 4 May 2014.