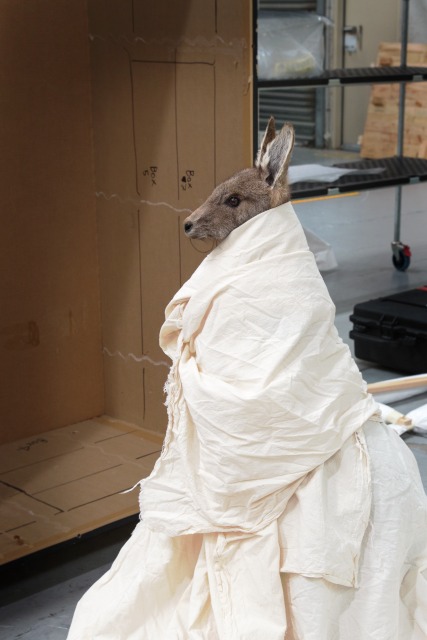 Hobart and Canberra rank as two of the coldest cities in Australia. As winter temperatures set in, spare a thought for our latest acquisition, the Forester kangaroo taxidermy specimen. In late 2013, this female kangaroo died of natural causes within the Boronong Wildlife Sanctuary in Brighton, Tasmania. The taxidermy was commissioned by the National Museum of Australia and prepared by Tom Sloane from the Tasmanian Museum and Art Gallery.

The kangaroo has arrived from Hobart at the National Museum’s storage facilities at Mitchell, a suburb on the outskirts of Canberra. Unfortunately, the welcoming committee was far from warm. As soon as the kangaroo was removed from the packing crate, she was covered in calico and plastic wrappings and put into the freezer.

There she remained for a week, at a constant temperature of minus 21 degrees C.

Details of the taxidermy process can be viewed in my previous blog post, A crash course in taxidermy.

Freezing is the most effective method of ensuring the elimination of any pest activity
on or within objects. Wooden objects, textiles, and in this case, animal skins, are more susceptible to insect damage than other materials. The instant reduction in temperature protects against the ability of some pests to enter a state of hibernation.

This treatment is common for new objects arriving at the Museum. The National Historical Collection is the core collection of the National Museum of Australia. It includes more than 200,000 objects, most of which are stored at Mitchell. Care for the collection rests with the Museum’s Collections Management team, consisting of the Conservation and Registration sections.

Donna Wilks, the Museum’s Preventive Technical Officer, is responsible for the preventive care of the collection including environmental monitoring and pest management. Donna inspects every object on arrival at the Museum, looking for evidence of pest activity or other hazards. More information about Donna’s role and preventive conservation can be found on our website.

The logistics of transporting the kangaroo from Tasmania to mainland Australia falls
under the responsibility of our Registration section. In addition to organising a suitable crate, liaising with the Tasmanian Museum and Art Gallery and organising the transport,
a permit was required to bring the animal across the Tasman.

The next stage in the kangaroo’s journey involves getting her ready for display in the Landmarks gallery. She is scheduled to go on display in late July when she will take pride of place in the Hobart case. A task which appears to be simple and straightforward is often deceptive. A number of steps happen before the kangaroo can on display. A conservator inspects the object and prepares a condition report, mounts are fabricated and objects which are to be removed from the exhibit are de-installed. The whole process is planned to ensure a seamless changeover of objects in the galleries.