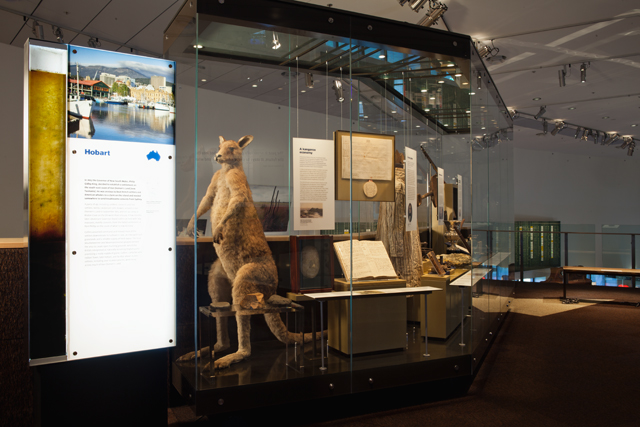 WARNING: This blog post contains images which may be upsetting to some readers

The role of an assistant curator in a museum encompasses many different tasks, but one, which I had not envisaged is the procurement of taxidermy specimens. When asked to investigate the possibility of commissioning a specimen of a Forester kangaroo for our Landmarks gallery, I was slightly apprehensive. My knowledge of taxidermy, as I imagine for most people, was extremely limited.

As a child, I remember visiting museums and staring in wonder at exotic animals and birds, allowing my imagination to take me to places and dreaming of seeing these creatures in their natural environment. A vision far removed from the shipyards and industrial landscape where I was raised near the River Clyde in Scotland. A vision, also far removed from the process and skill required to prepare these animals for exhibits and preservation.

The Forester kangaroo is native to Tasmania, a subspecies of the Eastern Grey kangaroo, which is common on mainland Australia. The numbers of Forester kangaroo were significantly reduced after European settlement of Van Diemen’s Land at the start of the 19th century. On arrival in Van Diemen’s Land in 1803, the early settlers found an abundant supply of kangaroos. The introduction of hunting dogs to the island made them easy prey, and soon they had a supply of fresh meat. The exploitation of the traditional food resources of the Mouheneenner and Moomairremener people ultimately caused conflict between the Europeans and the Aboriginal people. Today, the Forester kangaroo is a protected species under the Tasmanian Nature Conservation Act 2002. The new taxidermy specimen will be displayed in the Hobart case of the gallery, replacing the male kangaroo, which is on loan from the Tasmanian Museum and Art Gallery (TMAG).

In mid-2013, I contacted Tom Sloane, the taxidermist at TMAG to discuss the possibility of commissioning a replacement specimen. We had to wait until a suitable kangaroo became available. In late-2013, a female kangaroo died of natural causes within the Boronong Wildlife Sanctuary in Brighton, Tasmania. The animal was sent to TMAG and the taxidermy process began.

The following pictures show the various stages of the taxidermy process. Captions become visible when you scroll over the base of each image. Click on the images if you would like to view them at a larger size.

The process of taxidermy. Photos courtesy of Tom Sloane, TMAG.

Taxidermy’s role in the museum environment has changed over the years, from initial specimens prepared for scientific research and classification, to dioramas presenting animals in their native habitats, physical records of species which are now sadly extinct, to a modern approach which presents taxidermy specimens as artistic works.

The National Museum of Australia is not a natural history museum, however we do have a number of taxidermy specimens in our collections. The Grazing the Grasslands module of the Landmarks gallery includes exhibits which feature a shorthorn steer, a merino sheep and two dingos. The presence of the animals in the context of their associated stories, adds to the visitor experience in a way not possible by using a two dimensional image. Visitors’ attention seems to be drawn towards the taxidermy animals, especially in the curious minds of children. The dingos are concealed behind a screen, their hanging bodies revealed when the visitor presses a button, located in the jaws of a trap.

Another notable specimen in the National Historical collection is an ornamental case containing birds of paradise, inherited as part of the Australian Institute of Anatomy collection that was transferred to the Museum in 1981. More information about the case can be found in our reCollections journal.

Other interesting reading about the art of taxidermy and its changing role in museum environments include Dead museum animals by Libby Robin and Rachel Poliquin’s website Ravishing Beasts.

The display of taxidermy animals in museums has been constantly changing over time. The Melbourne Museum’s exhibition WILD: Amazing Animals in a Changing World displays traditional taxidermy specimens without any attempt at replicating their natural habitat. More than 750 animals fill the gallery from floor to ceiling against a white background. Multimedia screens replace traditional text panels which provide access to information focusing on how individual species are affected by climate change and human activity. The links to environmental concerns present a viewpoint of the future of these animals rather than representing the past.

Hobart case in the Landmarks gallery with Forester kangaroo on loan from TMAG.
Photo: National Museum of Australia

Thank you to Tom Sloane for his expertise and assistance.