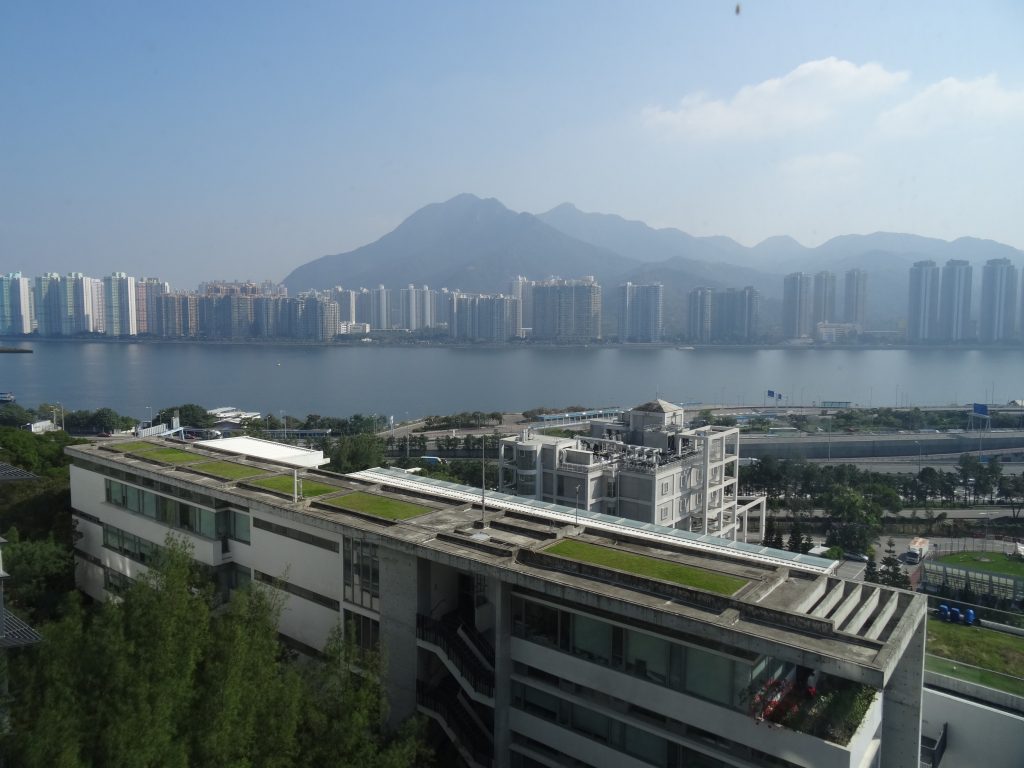 The first thing I noticed about the Jockey Club Museum of Climate Change was the noise. When I arrived, a class of school students had just been released from formal proceedings for some “unstructured time” in the exhibition space, which prompted laughter, squealing and generally excitable tones from otherwise impeccably behaved students. My host and one of the creators of the museum, Dr Matthew Pang, paused at the cacophony. “That is my favorite sound to hear in the Museum…It always brings a smile to my face”.

Surrounded by water, Hong Kong is one of the densest conurbations on the planet, so it seems fitting that it should open the first museum dedicated to the topic of climate change. Located at the Chinese University of Hong Kong, the Museum is a collaboration between the University, polar scientist Dr Rebecca Lee, and one of the city’s oldest institutions, the Hong Kong Jockey Club (HKJC). Horse racing and gambling are a big deal in Hong Kong. Seriously big. The extraordinary wealth of the HKJC has meant that it is able to fund a range of civic projects throughout the city. The Club rose to prominence after the Second World War as Hong Kong struggled with post-war reconstruction and massive surge of immigrants. As the city went skywards, the growing club began devoting some of its earnings into charity and community projects. While the club is undoubtedly a group of Hong Kong’s most wealthy citizens, it supports the city’s diversity and distinctiveness through a broad range of endeavours, including sports facilities, schools and now, a museum. Members were concerned about the long-term sustainability of their city and that concern, naturally enough, extended to climate change.

What about the exhibition? Firstly, it does not vacillate on the reality of anthropogenic climate change. It accepts, as established empirical scientific knowledge, that human endeavour is affecting the climate and moves on to more pressing issues. It does not seek to “balance” mainstream scientific analysis with the work of climate-change deniers.

The journey through the Museum begins with an imaginary trip aboard a Chinese research vessel heading to the Arctic Circle to explore the impact of rising sea levels. A sounds and light show, complete with arctic winds, a prop polar bear, igloo and Inuit fisherman. Here the occasional use of the term ‘Eskimo’ is jarring, and is likely to be down to some translation glitches, but the intent of the exhibit is to draw attention to the impact of local cultures already dealing with the impact of shrinking polar ice and changes to traditional hunting patterns.

The next part of the exhibit explores work of Hong Kong based polar scientist and explorer, Dr Rebecca Lee. Some of her collections that relate to climate work are on display other elements that examine the work and results of climate scientists. The third segment allows visitors to consider the various predictions for global temperature rises and what this might mean for them personally. A large interactive map allows visitor to program likely sea level rises and then search for familiar landmarks, sweeping over flooded terrain searching for their apartment tower. One might question the depth of this kind of interactive, but the emotional impact is clear and that is something the Museum of Climate Change, for all its scientific focus and rigour, uses as the real trigger for action.

In a clever design feature, the next section of the Museum sees the visitor emerge from the dimly lit gallery space into an area flooded with natural light and views across the lush campus. The feeling of hope this inspires prepares the visitor for displays about primarily Chinese research and innovation around climate science, water harvesting, solar cell technology and architectural designs intended to cool the incredible heat banks created by Hong Kong’s skyscraper canyons.

As visitors leave the space they can have their image taken superimposed onto an electronic postcard, becoming polar explorers and scientists. In order to have the image emailed they must place their hand against the screen and make a pledge to do one thing to reduce their carbon footprint, such as buy fewer clothes, eat less meat, or my case, agree to fly less!

The Museum of Climate Change is far from the catalogue of calamities that one might expect at this time of global crises. Rather it offers visitors a vibrant and inquiring experience, one that unashamedly seeks to drive social change. The exhibits largely ignore the role of politicians (although they are not let off the hook) and a timeline describes the longer political history of action (or inaction, as the case may be) over the last few decades. Instead, individuals are empowered to examine the impact on their city and the planet.

As climate awareness shifts to the centre of public life, Museums around the world are responding by using interactive design and storytelling to inspire climate education and action. Last year, members of the team developing New York’s Climate Museum visited the JCMCC looking to see how they operate as a centre for public engagement. In recent times, museums have grown circumspect about their function as agents for social change, instead preferring a more comfortable position as providers of historical education and entertainment. Recent trends in Hong Kong, New York and elsewhere, however, suggest the mood is changing and that the unprecedented cultural challenge of climate change might reinvigorate museums across the globe as key sites to promote changes in behaviour and civic action. In the meantime, if you do happen to visit Honkers, take the short train trip to the beautiful Chinese University of Hong Kong campus. Make sure you make some noise – it will make Dr Pang’s day!