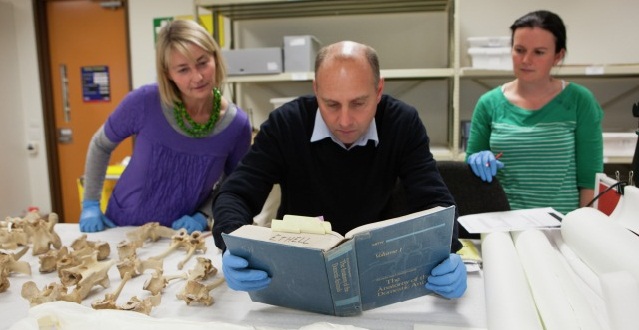 In every curator, there’s surely a bit of the forensic investigator and I’m currently playing sleuth in an excellent mystery – an equine ‘who-is-it’.

When the National Museum’s Horses in Australia curatorial team started work on the project earlier this year, one of our first tasks was to discover what the Museum already held in its collection’s relating to equine and equestrian history. We searched through our online collection database, read through some thick paper files and asked the curatorial ‘hive-mind’ – that is, our colleagues – what they knew about our horse related holdings.

The search turned up references to over 5,000 objects, including, in the Australian Institute of Anatomy collection, a few minimal, but intriguing, pointers to equine skeletons. The Institute of Anatomy collection is one of the Museum’s founding collections. It was established in the opening decades of the twentieth century by Melbourne orthopaedic surgeon Sir Colin Mackenzie and eventually grew to encompass thousands of animal specimens, including whole, partial and dissected ‘wet’ specimens, mounted taxidermy and skeletal remains, representing many Australian native species as well as animals like mice, monkeys, rabbits, sheep … and horses.

The Institute collection was transferred to the National Museum in the early 1980s and while some parts of it have, since then, been photographed, documented and used in exhibitions, many items have simply been kept safely in storage. The horse skeletal items fall into the latter category and it’s perhaps, consequently, not so suprising that when I asked Registration officer Sarah Streatfield to pull out the fifteen items identified as ‘HORSE’ on the Institute of Anatomy ‘Listing of the Zoological Collection in Species Order’ (see above), so I could take a closer look at them, it did feel a bit like I was asking her to dig up buried treasure.

The relevant brown cardboard boxes arrived in the Collection Access room, and Sarah and I opened their slightly dusty lids to find a mix of bones wrapped in paper. My hope was that we would find a complete, if dis-assembled, skeleton that we could re-build for display in the Museum’s forthcoming horse exhibition, but the first task was simply to confirm whether the bones were, in fact, equine. Much to my relief, Mark Ethell from the Canberra Equine Hospital volunteered his time to help us with this work. We set about inspecting each bone, confirming its species and noting where it belonged in the skeleton. This information was recorded on a cardboard tag tied to the relevant item and entered into our online collection records.

It turns out that we hold bones from a number of horse skeletons, and also a few bovine (cow) and hippopotamus bones that had been packed into the boxes. The collection includes some of the leg bones of a large, heavy horse, and a complete articulated leg that was evidently of interest historically for its highly diseased state. And I was delighted to discover that we appear to hold all the parts of the skeleton of a quite light, small horse – or almost all parts, as we were missing the skull. I wasn’t too keen on the thought of re-articulating and displaying a headless horse.

Further research into the Museum’s records revealed that the Institute collection did include a number of equine skulls but that these were on long-term loan to the University of Canberra. The first skull arrived back at the Museum a couple of weeks ago, but I was disappointed to discover that it didn’t fit the skeleton. It was very large and heavy and had been polished and possibly painted in the same style as the ‘loose’ heavy leg bones. Now, three more skulls have arrived back and I’m looking forward, with crossed fingers, to seeing if they match our (almost) complete skeleton.

I’m also trying to find out where the most complete skeleton might have come from, and, in an ideal world, the name of the horse of whom it was once a part. Mackenzie, who founded the Institute of Anatomy collection, was a comparative anatomist. He was primarily interested in how different parts of animal bodies varied across species, rather than, for example, how these related to the animal’s life or its ecological niche. As a result, Institute staff didn’t create very good records about the origin of their specimens and it’s probable that, over the years, some records have been lost. So far, I haven’t been able to find any reliable records about the source of the equine remains.

Nevertheless, a search of the Trove database reveals some tantalising newspaper reports that may provide clues to the identity of our skeleton and other bones. On 8 April, 1932, for example, the Canberra Times noted that,

The bones of Comedy King, a former champion of the turf, and one of the greatest sires in Australia, have been received at the Institute, and are at present being set up for exhibition. In the course of a few weeks, it is expected that the bones of Malster will be received.

Comedy King and Malster (sometimes spelled Maltster) were turf champions of the early 1900s and important Australian thoroughbred sires. They were joined at the Institute by the legendary Phar Lap’s heart, and possibly also the skeleton of another famous sire, Heroic. Do the Museum’s bones belong to these horses? Which skull goes with which horse? Now I’m on the hunt to find out what these horses looked like and how they died, hoping that one of them might turn out to be a relatively short, lightly built horse like our most complete skeleton. When our Horses in Australia exhibition opens in September next year, I’d love to be able to introduce him properly to his public.

Perhaps you know something about these great Australian racehorses of the past?