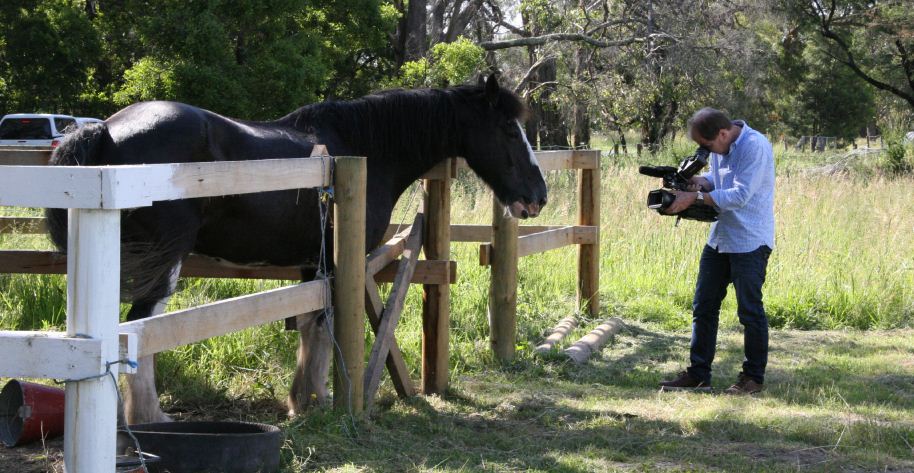 Though at times exhausting, the events of last week have reminded me just why I love my job so much.

My talented film-maker colleague, Jeremy Lucas, and I have just returned, footsore and triumphant, from an epic four days of filming in Melbourne and regional Victoria. As part of the Museum’s current Horses in Australia project, we’re working on a short documentary film to be produced in-house. The film will explore the background of one of my favourite objects in the Museum’s collection – a horse-drawn wagon used by the Tighe family to deliver milk to suburban Essendon between the 1950s and 1980s.

As this blog demonstrates, it’s often the case that the deeper you dig the more an object reveals to you the individuals who populate its past. But it has to be said that this object comes with an unusually rich repertoire of stories. It was in use as recently as 1987 and so is quite the spring chicken in museum terms. Vehicles of this type were once a ubiquitous sight in inner-city Melbourne, but evolving patterns of urban living and consumerism meant that by the mid-twentieth century most of them had been replaced by motorised delivery trucks or supermarkets. However, the wagon now held by the Museum suited the Tighe family and their business for much longer than many of their contemporaries, and while it’s difficult to verify I have heard tell that the wagon was in fact used on the last horse-drawn delivery round in Melbourne.

We’ve been amazingly fortunate in being able to track down Bernie Dingle, who was apprentice to the master coachbuilder who built the wagon back in the early 1950s. Bernie now has his own Light Horse Museum. We also located Conway Tighe, the milkman who owned the wagon for almost forty years, and several residents who lived along the milk round. While in Melbourne, we were also treated to a fascinating glimpse into the art of hand-painted sign-writing, like that on the wagon, by Rob Weaver, a professional sign-writer living in Essendon. All these people remember the milk wagon and the succession of handsome Clydesdales who pulled it with great affection.

Jeremy and I knocked out quite a few twelve hour days this past week. For each interview, we had to experiment with a number of different set-ups to make sure the backgrounds were unobtrusive-yet-sympathetic, before we could get started. As it turned out, each and every interviewee turned out to be a consummate professional. Despite the odd bit of acoustic trouble from gathering rain clouds, snoring dogs and once a zealous neighbour with a whipper-snipper, we had very few retakes, and I’m confident we’ll have some very natural exchanges caught on camera.

Keep an eye on the blog for further news about the film as we start delving through all the footage as the editing gets underway. We’d also love to hear from anyone who remembers horse-drawn deliveries in Melbourne or elsewhere, or maybe even this milk wagon in particular? Please do use the comments field below to let us know.

[Feature Image: Jeremy gets it straight from the horse’s mouth. Photo: Laura Breen]