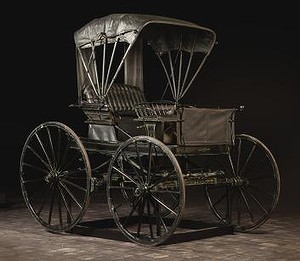 Every Australian family wanted one of these. With room for the whole clan on two bench seats, the sleek and robust double Abbott buggy was the FJ Holden of the late 19th century. I like to imagine the Victorian equivalent of the barbecue where ladies chatted about the Abbott’s silky smooth ride and the convenience of its rain hood. Men might have debated their buggy’s top speed with a decent pair of horses on the front.

I jest. The horsedrawn buggy was a serious business. Life without one was unthinkable, particularly for rural folk. The National Museum of Australia’s double Abbott buggy, on display in our exhibition Spirited: Australia’s Horse Story, was used as a means of private transport in and around Boorowa, New South Wales from the 1870s.

As with many like it, the museum’s buggy was probably designed and built in Australia based on a design by the Abbott Downing Company, New Hampshire, in the United States. The Abbott buggy’s lightweight design spared the horses, while the four large wheels, which provided stability and comfort over rough roads, spared the passengers’ backsides. A sound and versatile choice for rural Australian families, they were often used around the farm during the week and cleaned up for a weekend run into town or church.

Looking at this object, I am reminded of the way buggy drivers eventually had to contend with an exciting and fashionable new contraption that proliferated on Australian roads, which, quite literally, was startling the horses. “Scorchers“, as fast-moving cyclists became known, earned the ire of many a buggy driver. Some demanded that the government ban the faddish devices altogether. Bicycles challenged the horse and buggy for speed, economy and reliability. They didn’t require food or rest. They didn’t eat poisoned vegetation if you left them unsupervised. And they didn’t poo on the floor if you took them inside.

Yet, buggies and bikes co-existed for decades, and, in addition to walking, were the mainstay of personal transportation. But by the mid-20th century these renewable forms of transport were about to fall out of fashion. Cyclists and buggy passengers alike began choking through the clouds of dust and exhaust produced by passing motor cars, the new symbol of modern, industrial Australia.