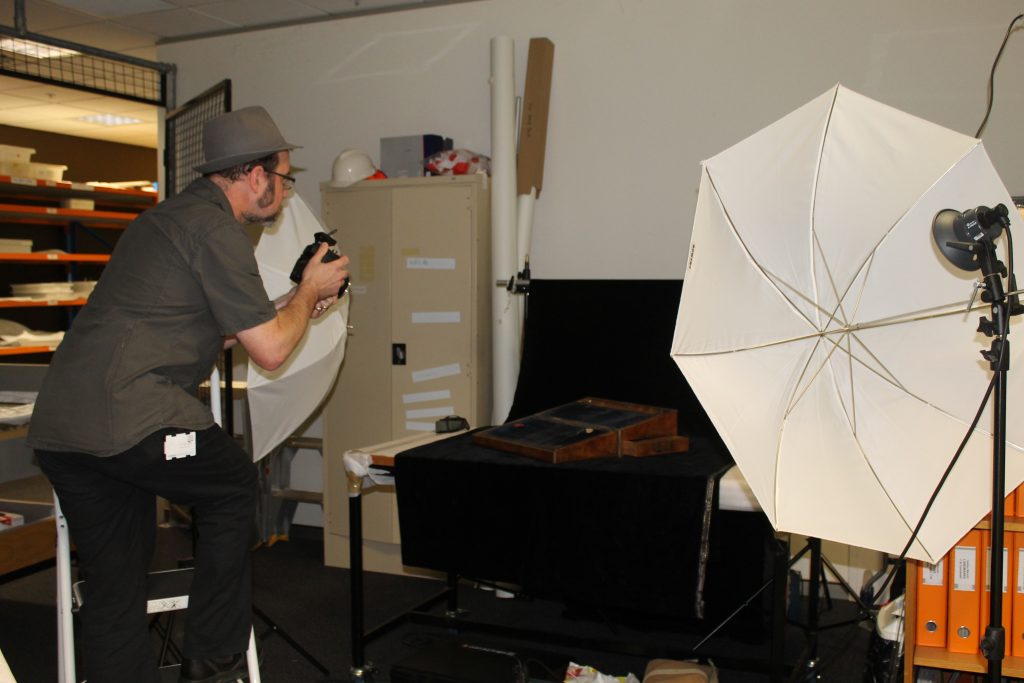 One of the most interesting aspects of working as a curator is observing how different people interpret objects in different ways. Some people may look at a writing box and see a functional object made to serve a specific purpose, others may view it as an object which tells the story of a person, place or event, and some may even experience an emotional response. Last week, I was privileged to gain an insight into how a contemporary artist is interpreting some of our collection through his camera lens.

CJ Taylor is a practising visual artist based in South Australia and PhD Candidate at the Australian National University. CJ predominantly uses photography as his medium and has exhibited both nationally and internationally. He also lectures in photography at the South Australian School of Art. In 2014 he won the inaugural Adelaide Park Lands Art Prize and was a finalist in the first Kennedy Prize for beauty.

CJ’s PhD project aims to explore the complex relationships which exist where the natural world and the colonised world collide. The idea that ‘nature always resists culture’ underlies his work, and through the use of various photographic techniques, CJ will present imagery which will question the idea of the existence of objects in a defined time and place. Photographs of objects related to Colonel William Light, the first surveyor-general of South Australia and founder of the city of Adelaide, will be used as a means to collapse the chronological perception of time between the past and the present.

The Museum holds a number of collections relating to Light including a writing box, two hand-coloured lithographs and an early copy of the ‘Plan of Adelaide’. CJ contacted the Museum late last year seeking permission to photograph some of our objects. The writing box captured CJ’s imagination along with some smaller objects including fountain pen nibs, sealing wax, pieces of writing lead and an eraser.

For me, that writing desk was emblematic of Light, being known for his surveying and town planning. It’s a very human object, it’s an everyday object and it has all the marks of usage, it’s really well worn, it’s not pristine, it’s a tool – but it’s beautiful, it’s made of gorgeous wood and of course it’s made from a living thing – these are all the marks of the life of someone.

Colonel Light’s writing box is currently on display in the Adelaide exhibit in the Landmarks gallery. Light commanded the merchant ship Rapid during its voyage from London to South Australia in 1836 and the ship’s officers presented this desk to Light to commemorate the successful passage. Light probably used it as he created charts or drafted official dispatches and letters in his role as surveyor-general of the
new colony.

In order to facilitate CJ’s request a considerable amount of planning was required involving the Museum’s curatorial, registration, conservation and photography teams. Arrangements were made for CJ to photograph the object at our Acton site
in a small makeshift studio.

The scope of the project also includes photography of a number of other objects associated with Light held by South Australian institutions, including the Civic Collection at the Adelaide City Council. Images of the objects will be combined with landscape photographs shot on location in South Australia and as far afield as the remotest islands of Scotland. Colonel Light was stationed near Stirling in Scotland prior to his arrival in South Australia. This creative exploration of objects, time and place will continue to evolve through the duration of the project.

My landscape imagery will combine South Australian and Scottish geographies in a conflated collapsing of time, place, object and memory
in nature.

In the museum context, Colonel Light’s writing box contributes to the story of the settlement of South Australia and the planning of the city of Adelaide. It illustrates the important role of the surveyor-general and is a testament to Light’s influence. This is a fairly literal interpretation of the object, however, as CJ’s images are removed from the confines of the Museum environment it is going to be fascinating to see how his artistic interpretation develops into a body of work. The project is due to be completed in late 2016.