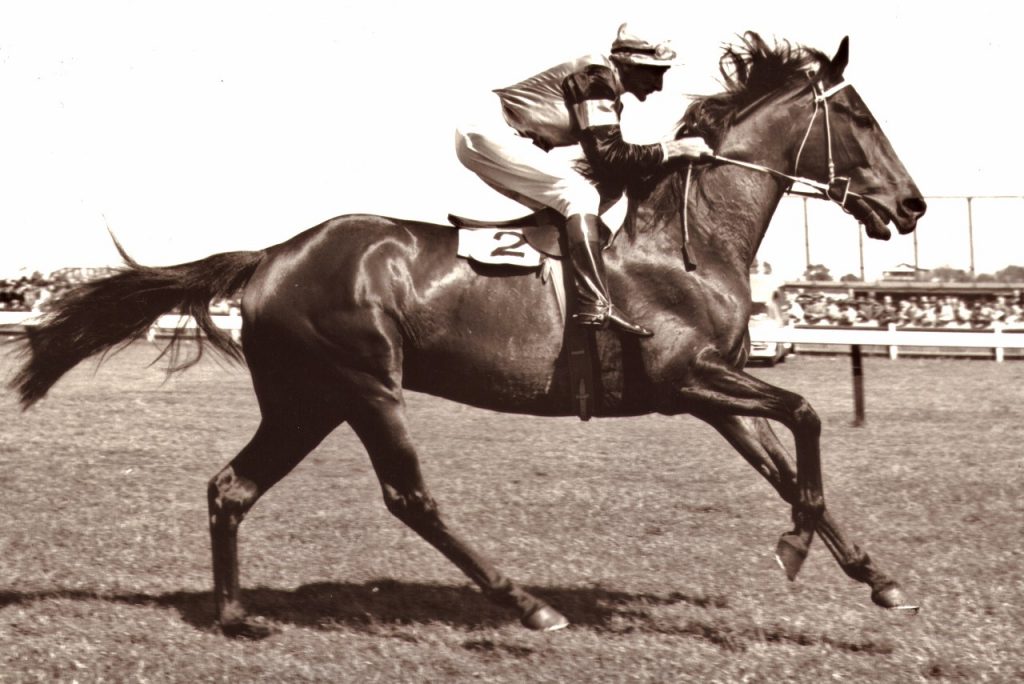 But for me, the more moving object in our Rising Fast collection is the horse’s racing plate – one of the aluminium horseshoes he wore in the 1954 Melbourne Cup.

With a few exceptions, most of the famous horses Australians know are racehorses. On Cup day, the names of past winners cross the commentators’ lips like a litany: Archer, Carbine, Phar Lap, Makybe Diva. Racing’s passion for statistics and culture of storytelling ensure that each name triggers a torrent of anecdotes and facts from the knowledgable punter.

Rising Fast’s name stands with the greatest in the pantheon: because of his three spring victories, and also for the run of seven wins it was embedded in, for the great weight he carried in the 1954 Melbourne Cup (nine stone five pounds, or 59.5 kg), and for his controversial and disappointing second place in the 1955 Melbourne Cup, spoiled by what many saw as interference from the winner Toparoa.

Perhaps in keeping with Rising Fast’s reputation as a horse ‘robbed of his bid for immortality’ (as Matt Stewart has put it), it is his shoe, rather than his heart, hide and skeleton, that have survived to represent him.

Curator Isa Menzies has written that Phar Lap ‘has achieved a form of secular sainthood’, and his ‘physical remains appear to have attained the status of quasi-religious relics’. The tradition of transforming a beloved horse’s mane, tail or hooves into keepsakes and ornaments dates back to the nineteenth century. In the case of hair, from the early 20th century racegoers eager for a handful had to be coralled away from the track stop them taking to the winning horse with a pair of scissors. The Museum’s collection includes a plaited lock of hair cut by an enthusiastic fan from Uncle Sam, a chestnut stallion who won the coveted Caulfield Cup in 1912 and 1914. Rising Fast faced the same threat from souvenir hunters on his return to New Zealand in 1954.

Rising Fast’s horseshoe was neither torn from his hoof by an over-excited admirer, nor cut from from his body after death. While clearly treasured, perhaps even revered, it still has something of the everyday about it. Its dull, scratched aluminium reminds me of the surfaces of humbler icons of 50s domestic life, like the kettle or the pressure cooker. Close up, the shoe seems astonishingly small – a reminder of the tiny surface area that a 600kg horse has in contact with the ground, especially at full gallop.

Looking at the horseshoe makes me think about the ordinary lives even the most lauded equine champions lived away from the track. Rising Fast was frequently compared to Phar Lap, not just because of their origins on the ‘other side of the ditch’, but because of their prodigious talents and race records. The Phar Lap legend tends to imbue the prosaic details of his life, especially those in his final weeks, with deeper significance. As Menzies reminds us, Phar Lap was a real horse, ‘he ate, and shat, and won races’. Rising Fast did too – and yet his story has a distinctly different arc – thanks in part to his owner’s meticulous diarising and affectionate, occasionally whimsical, account of their time together, Racing with Rising Fast (1971).

From it, and from the recollections of his trainer’s son Bob Hoysted, we have an picture of a horse with, as Matt Stewart put it in The Story of the Melbourne Cup, ‘a penchant for bread, peppermints and roses’, a ‘kind but sooky disposition’ and a ‘phenomenal appetite for hard work’. Known as ‘Joe’, he prefered the company of chickens, ducks, geese and cats to humans and horses. When he returned home from a trip to Sydney and was found ‘shaking and shivering in his box’, Hoysted put him in the chook yard, ‘and that’s when he came good’. ‘He was a horse who liked his own freedom. You couldn’t lock him up in a box’, Hoysted recalled. Rising Fast was once found wandering in Cheltenham Cemetery with a pony, having escaped from his stable. ‘He was a gentle horse as long as he got his own way. He never wanted to kick or bite or anything like that. He used to bite my red roses off, that was all’, Hoysted remembered, ‘[h]e was a lovely kind horse.’

Unlike the air of mystery and martyrdom surrounding Phar Lap’s death, Rising Fast’s passing came when he was 29 years old, in the paddock of his home near Te Awamutu in New Zealand. His later years had been spent giving rides to children, and collecting the mail from the front gate.

Rising Fast’s horseshoe appears at the end of the Spirited: Australia’s Horse Story showcase dedicated to Australia’s racing history. Its plainness stands in contrast to the shiny 1860s Melbourne Cups, the shimmering Forrester silks, and the lustre of Carbine’s portrait. It seems fitting for a horse who, as Stewart describes it, was walked from the Newmarket stables across a railway line and along a major road to the Flemington Racecourse, amidst a crowd of racegoers unaware that he was the hot favourite for the cup.

Rising Fast’s horseshoe connects us simultaneously to the ordinariness of his daily routine, to the drama and significance of a remarkable moment in Australia’s racing history, and the delicacy of his contact with the ground as he passed the winning post on this day sixty years ago. As the big race approaches, I’m thinking about the spectacle and speculation going on at the track, the strength, fragility and individuality of the horses, and their lives before, during and after the race is run. And I’ll be reflecting on the rare intimacy looking at a simple horseshoe gives me with Rising Fast, a kind horse who made friends with ducks.