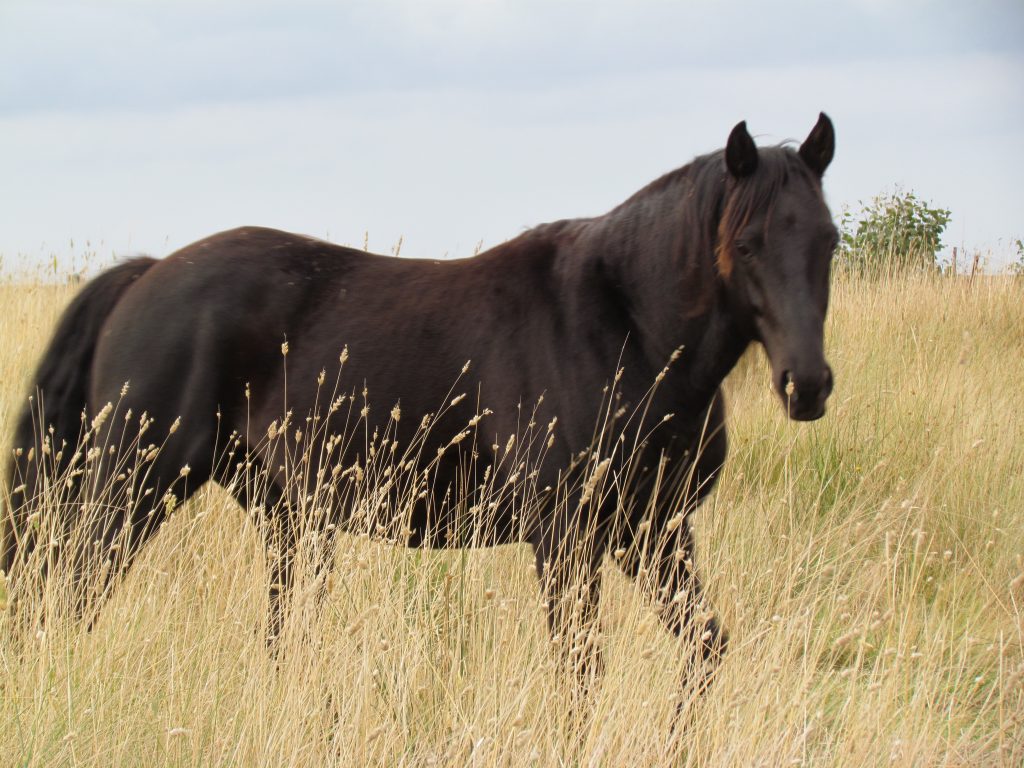 During the development of the Spirited: Australia’s horse story exhibition, the National Museum has been in contact with numerous breed organisations and representatives from across Australia. Several weeks ago, I was contacted by Angela Tiede, a passionate supporter and owner of Waler horses. Angela sent the following stories of some of her horses for use in this guest blog post as part of her aspiration to help Walers “find their modern role in our community… Our pioneering horse meets our pioneering future, so to speak.”

The remount trade declined during the 1940s, and in the following decades remaining herds of Waler horses were shot or left to roam in the wild. Culling of wild herds during the 1980s initiated debate about the status of Walers as a type or breed and led to the development of breeding and preservation programs.

I own several of the now rare breed Waler horse, that is, horses from the remnant populations of Waler horses bred commercially until 1949, with no modern gene introduced since then.

I became associated with these horses purely to work towards promoting the breed and their history in order to preserve it for future generations. A central part of my activity are displays at the Collingwood Children’s Farm on Anzac Day, and each year I take one or more of my Walers there for the day. I also have a Waler mare, Mega, on free lease there for the young farmers program. My horses originate from wild stock (foundation Walers) born on Newhaven Station in the Northern Territory, 350km northwest of Alice Springs. They are wonderful Waler ambassadors: beautiful to look at, calm, curious and friendly, demonstrating time and again how well-bred these horses are given how raucous and busy the Collingwood farm is compared with their peaceful existence on my property just outside Melbourne. They started their domestic experience being rounded up as foals and trucked thousands of miles to holding paddocks for the Peterborough meatworks from where they were rescued, and yet they stand steadfastly in the stables as thousands of visitors come through to pat and admire, and in the arena as hundreds of kids yell out the birthday song on the Horse’s birthday (a visit I also make).

A whole variety of visitors go through the Farm and many of the Australian visitors are ignorant of the history of these horses and their contribution to our military (and settlement) efforts, whilst many visitors from the UK are very aware of it from their own military history. The Australian Light Horse is represented at events all over the country but the horses used are usually the ‘modern’ version of the Waler (the Australian Stock Horse). It’s so rewarding for me to see the interest my horses create and to receive so much oral history from many of the visitors as they recall their family involvement with these horses on farms or at war. I have been working with the Collingwood farm since 2006 and always enjoy my twice-yearly visits immensely, the sight of my Waler gelding gently smelling a young child never fails to move me, or hearing an older person’s joy at meeting their very own heritage horse, so many unique and treasured moments facilitated by these horses.

Mega was born on The Garden station, situated on the north edge of the McDonnell Ranges area of the Northern Territory, east of Alice Springs.

The station for many years up until the 1930’s had been owned by the well-known horse breeder, buyer and exporter J. Robb who extensively bred Walers of the Light Artillery type for export to India there. The same horses were much sought after for local sale also.

The early breed influences on The Garden that produced these Walers included that of the stallion “Pistol” – a descendent of the old Thoroughbred “Carbine”, Timor Pony, and other heavy horse and pony breeds. Horses there had been running largely unmanaged since that time, genetically isolated and without outside influence. Occasional capture for stock work or culling purposes was done by trapping due to the inaccessible nature of the location. Only the most hardy and sensible survived and bred on.

When the station was being de-stocked of horses in the 1980’s, Mega as a young foal along with others was rescued by WHOBAA members and trucked to Victoria. Since then she has produced one foal and three owners prior to being re-purchased by her present owners specifically to provide her with a comfortable and useful life, displaying the attributes of her Breed. She has given confidence to inexperienced adults and children over the years, and should continue to do so for years to come.

Fisher, Pearl and Rigoletto were born on Newhaven station, bordering the southern Tanami desert area of the Northern Territory, during an extended period of drought. All horses there had been running unmanaged for 40 years and were descended from Waler types brought to the station at that time from surrounding areas. When the station was de-stocked in 2003, these three were amongst a small herd of foals rescued by WHOBAA members from holding paddocks in South Australia, just prior to their long journey ending at the Peterborough meatworks.

Fisher and Pearl display all characteristics of the Norfolk Roadster (now extinct) and Cleveland Bay coaching breeds, with straight noses, black dorsal stripes, short fine dark coats and black points. Rigoletto is of Basuto/Timor Pony type, used in the military as a scout and polo horse.

The horses retain the physical scars of their previous wild existence, and we can only hope their new home on 64 acres of rolling paddocks at Clarkefield is going some way to erase the mental scars of their original displacement.

Newhaven station is approximately 2,626 sq. kms in size. It is located about 300km north-west of Alice Springs, in the Northern Territory. It is now one of the world’s largest private wild life sanctuaries and is owned by Birds Australia. Previously, Newhaven was owned by the Coppock family, run mostly single-handedly by Alex. In the 1930’s Alex’s father settled on Newhaven, after having originally lived in NSW. He had also lived on the stock routes in central Australia for a time, trading horses with stockmen who were moving cattle along these stock routes at various times. When the Coppocks first went to Newhaven in the 1930s, they took the horses overland with them. These were used as station and droving horses. In the mid-1930s a chestnut stallion was introduced, although his breeding is not known, he was considered to be of ‘good blood’, and had come from another outback station. In 1970, an old style Percheron Thoroughbred cross was introduced; this horse had been bred in Australia and was not a recent import. Gurner station was amalgamated with Newhaven station after 1981, including the separate horse plant. It is from the Gurner horses, some of which had come from Billiluna station; that the coloured Walers are thought to come from. It was with sad regret that Alex made the decision to sell Newhaven station in 2000/2001. He had a deep love for the outback country, and the animals that lived there, especially his beloved horses. A lot of the horses met a sad fate, however to date we have found approximately 200 that were lucky enough to find new homes. For those of us blessed to have one, or more, of these unique horses, I am sure we realize just how fortunate we are that these few escaped an ugly fate and now lead a better life.

Paper Doll was born at Tylden Victoria in December 2005, her parents are Romani and Classic Dardanelle. Paper Doll also visits Collingwood Farm regularly. Her mother and father are foundation Walers.

Romani was born on Garden Station NT in 1991, purchased as a malnourished 6 month old. She has blossomed into a typical Garden Waler, a true sturdy cob 14.2 h, jet black with the spots that come and go (old blood mark), grey hairs in the butt of the tail, and Pistol mark (son of Carbine). She has the distinct look of the Lincolnshire trotter, another old breed now extinct, with a huge ground covering walk and wonderful extended trot. All her foals are true blacks.

Classic Dardanelle was born on Cordillo Downs Station SA in approx 1981, purchased as an 8 year old. He had a most gentle and tractable temperament, as did all his foals, and was a wonderful example of the Waler breed given his domestication later in life, going on to achieve success in many arenas, from leading Anzac Parades to competing in dressage, eventing and hunting.

Romani is now in Tasmania, and Dardanelle sadly died 3 years ago in Victoria. I understand from his owner that a commemorative statue in the Middle East was modelled on Dardanelle some years ago when he was living for a brief time at Gulf Station at Yarraglen in Victoria.

With thanks to Angela Tiede and Olivia Knowles.