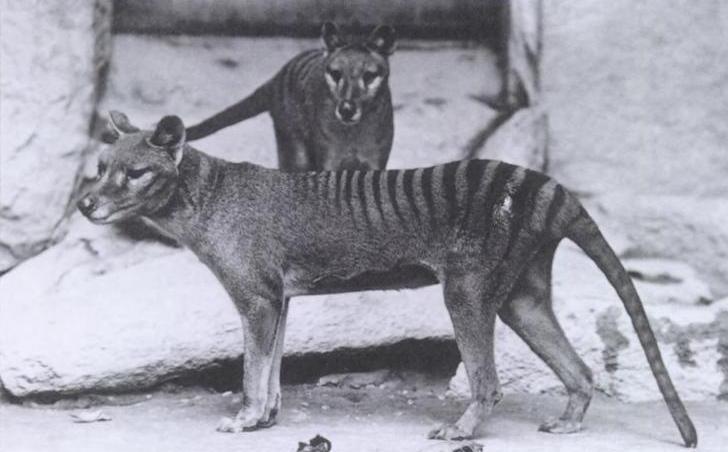 One of the most significant, fragile, and haunting objects held in the National Historical Collection is an entire skinned carcass of a thylacine, commonly known as the Tasmanian tiger. No records exist of where or how the specimen was collected. It is part of the MacKenzie collection of wet specimens, which includes various other thylacine organs and parts. Orthopaedic surgeon Sir Colin MacKenzie was the director of the Australian Institute of Anatomy, where this specimen was previously held. In this blog post, Nicki Smith, one of the Museum’s senior conservators, describes the latest efforts to understand and conserve the creature’s delicate remains.

In mid-March the UK’s most recognised fluid preservation conservator, Simon Moore, came to the National Museum of Australia to provide advice on the stability of our whole thylacine carcass wet specimen.

Simon Moore and Museum conservator Natalie Ison lift the thylacine specimen out of its protective solution. Photograph by Nicki Smith.

Although this specimen has been skinned, it is thought to be the only known example that retains the body and internal organs of an adult thylacine. When the new Museum building opened in 2001 this specimen went on display in what is now the Old New Land gallery, as part of an exhibition highlighting the impact of colonial and European settlement on Australia – impact that, at times, had devastating consequences.

However, on display, the specimen began to show signs of change with the solution becoming so cloudy that it was difficult to see anything in the murk. Analysis of samples showed the presence of long chain fatty acids indicating parts of the specimen were going into solution. The thylacine was on display in a first floor gallery and a vibration specialist advised that vibration can move through a suspended slab floor and that this could be transmitted through the fluid in the container to the specimen.

So in 2002 the thylacine specimen was removed from display and stored on a solid concrete floor. Since this move there has been no visible change in the specimen with the solution remaining coloured (like weak black tea) but clear. The specimen was displayed briefly in 2005 and 2006 as part of the Museum’s 25 year celebration exhibition, Captivating and Curious. This display was on a solid concrete floor and did not seem to impact adversely on the specimen.

Now, in 2014, with Simon Moore in the country, it was time to revisit the thylacine and explore further its condition, stability and treatment options.

Dressed in our protective clothing, goggles and respirators with cartridges suitable for filtering formaldehyde, we removed the specimen from its preserving fluid so we could look at it in close detail. We checked the pH of the solution and formaldehyde level and even removed some fluid from the internal stomach area of thylacine to give an indication of the condition of the internal organs.

Testing the pH of the solution. Photograph by Nicki Smith.

Simon poked and prodded the muscle tissue with his fingers to check for coherency then gently tapped the skull area and teeth to check for strength and stability. One of the first things he said was ‘no molars – of course’. He had to explain to me that because the marsupial evolutionary line had split early on from other mammals, the thylacine did not have the fused back molars that dogs now exhibit. Of course I had to go home that night and check my own dog’s teeth – sure enough I could see the large fused molars in the back of his mouth.

The muscles, bones and teeth of the thylacine all seemed structurally sound however there was one area of weakness on the left hip area. This had been identified back in 2005 as an area needing further investigation. The area is a crevice or gap around the size of a golf ball and the whitish components within the cavity have the consistency of soft butter. We took a sample from this area for further analysis and continued to check the specimen.

The tongue of the thylacine has been ripped out of the jaw, presumably when it was first skinned, and there is a small protrusion from the ‘bottom’ of the animal. We discussed the option of placing the specimen into a solution for a short time to soften the tissue with the aim of re-inserting the tongue back into the jaw. This would have to be done slowly with gentle pressure and if the body parts were not malleable it could not proceed.

Simon also commented on the mounting method of the specimen. It is tied down to a slanted Perspex board with loops of thread covered in silicon. The silicon cover provides a soft and inert layer that does not cut into or harm the specimen. A more standard presentation style for wet specimens is to use a needle and thread to pass through the internal sections and then tie this off to a transparent backing plate. This method is less visible but more invasive for the specimen.

By this stage the specimen had been out of its preserving fluid for more than one hour so it was time to put it back. We gently lowered the thylacine back into its solution, made sure it was covered, resealed the tank and went for a well-earned cup of tea.