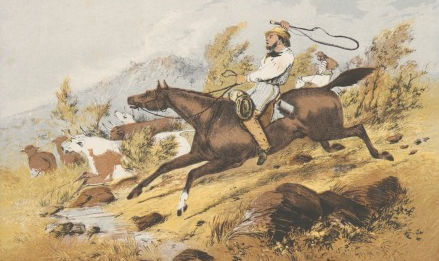 Today marks 150 years since the birth of Australian poet Andrew Barton ‘Banjo’ Paterson. Given that the talented horse rider took his pen name ‘Banjo’ after a racehorse owned by his family, it is not surprising that Paterson’s work was filled with lively descriptions of horses and riders in various settings, in particular the high country of New South Wales and Victoria. Paterson’s passion for his subjects can be found in each word of his poems, with a distinctive rhythm that brings their actions to life for his readers. It is perhaps those qualities that have given Paterson’s work its longevity, so that generations after his words were written, Banjo’s equestrian ballads are still a defining marker for the characters and lifestyles they have come to represent.

Born on 17 February 1864 at Narrambla near Orange, New South Wales, Paterson grew up in the bush and was riding ponies and horses from an early age. After an education at Sydney Grammar School, Paterson worked as a law clerk and then a solicitor in Sydney while continuing to ride in hunts, polo matches and amateur race events. Paterson also began writing and then publishing poetry, becoming a regular in The Bulletin during the late 1880s and early 1890s. Angus & Robertson published numerous editions of his collected works in The Man from Snowy River and other verses, and Rio Grande’s Last Race and other verses, including verses such as ‘Clancy of the Overflow’ and ‘How the favourite beat us’. Many editions were sold out, evidence of Paterson’s popularity and celebrity status.

During the 1890s, Paterson travelled across Queensland, the Northern Territory and New South Wales, submitting articles, stories and poetry to The Bulletin and other publications based on his experiences, including ‘Waltzing Matilda’. In 1899, Paterson travelled to South Africa to work as a war correspondent for the Sydney Morning Herald and Melbourne Age during the South African War, journeying on to China and then England. Paterson submitted poems and articles during the First World War whilst working as an honourary vet and serving with the Remount Unit. After the war, Paterson continued to enjoy success in his writing pursuits, with his work often reflective in tone and subject matter in response to the changes around him, including new focuses on Australia’s growing industrial and commercial interests. When he died on 5 February 1941, Paterson’s legacy was already firmly established, and has continued to grow and evolve to the present day.

One of Paterson’s most celebrated poems, ‘The Man from Snowy River’ has inspired generations of writers and artists, with Paterson’s words and characters having a life of their own in literature, film, theatre, and festivals across Australia and internationally.

There was movement at the station, for the word had passed around
That the colt from old Regret had got away,
And had joined the wild bush horses – he was worth a thousand pound,
So all the cracks had gathered to the fray.
All the tried and noted riders from the stations near and far
Had mustered at the homestead overnight,
For the bushmen love hard riding where the wild bush horses are,
And the stockhorse snuffs the battle with delight.

There was Harrison, who made his pile when Pardon won the cup,
The old man with his hair as white as snow;
But few could ride beside him when his blood was fairly up –
He would go wherever horse and man could go.
And Clancy of the Overflow came down to lend a hand,
No better horseman ever held the reins;
For never horse could throw him while the saddle girths would stand,
He learnt to ride while droving on the plains.

With both characters and events captured with lyricism and well-considered details – highlighting, saddles, bridles, whips, and clothing along with human and horse actions in a wild mountain setting – the poem has lent itself to revised expressions in sculpture and painting, amongst other forms. Most often, those forms look to capture the iconic scene in the poem’s climax:

When they reached the mountain’s summit, even Clancy took a pull,
It well might make the boldest hold their breath,
The wild hop scrub grew thickly, and the hidden ground was full
Of wombat holes, and any slip was death.
But the man from Snowy River let the pony have his head,
And he swung his stockwhip round and gave a cheer,
And he raced him down the mountain like a torrent down its bed,
While the others stood and watched in very fear.

He sent the flint stones flying, but the pony kept his feet,
He cleared the fallen timber in his stride,
And the man from Snowy River never shifted in his seat –
It was grand to see that mountain horseman ride.
Through the stringybarks and saplings, on the rough and broken ground,
Down the hillside at a racing pace he went;
And he never drew the bridle till he landed safe and sound,
At the bottom of that terrible descent.

The form of horse and rider plunging precariously and heroically down a steep mountainside after a herd of brumbies has come to represent the poem, and that scene is now often associated with its portrayal in the 1982 film The Man from Snowy River, featuring Tom Burlinson in the title role.

In 1993, the Reserve Bank of Australia issued new polymer $10 notes, featuring Paterson and his poem The Man from Snowy River. As we spend some of those notes today, and throughout the coming week, we might pause to consider the man and the poem on the $10 note.

Feature image: Depiction of a stockman by S T Gill, 1864, in a pose now most often associated with Banjo Paterson’s poem ‘The Man from Snowy River’. From The Australian Sketchbook by S.T.G., Hamel & Ferguson. National Museum of Australia.