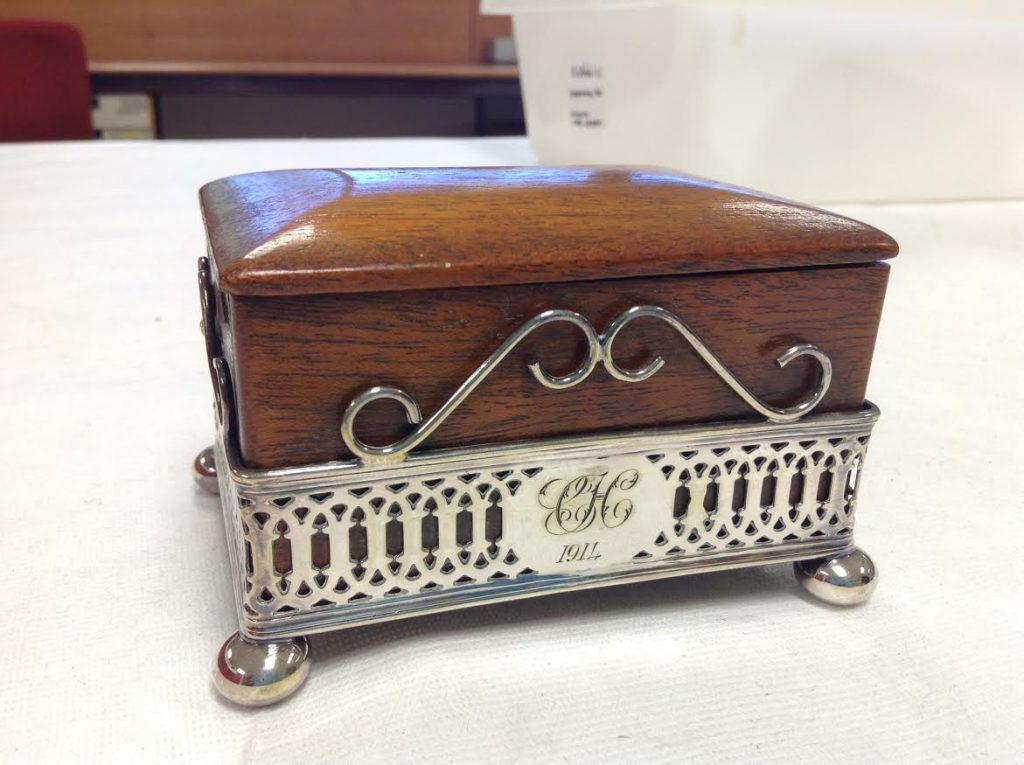 This week the People and the Environment team has welcomed Lucy, a work experience student from Hay War Memorial High School.

Lucy has been getting a sense of what museum team members do, by shadowing us as we go about our work. She’s been on tours of the galleries with the hosts, and taken part in an education program with students from Hay Public School (some of whom got a big surprise to see someone they knew at the museum!) She has attended the fortnightly Acquisitions and Collections Group meeting, where collection offers are discussed, and attended a donor visit to view a potential addition to the National Historical Collection. She’s sat in the editing suite as the new ‘Haunting’ film was cut together, and visited the Museum’s Mitchell collection stores. She’s also attended our Defining Moments conversation on the ‘Gallipoli centenary, a year to remember?’

There was a spirited discussion at the forum about the history and contemporary character of Australian commemoration of the First World War. At Lucy’s school, remembrance is meaningful part of every student’s life. In 1923 the people of Hay decided to build a school as their war memorial, and it was later proclaimed by Australian Governor-General Lord Stonehaven ‘the finest war memorial in the Empire’. Going about your school day there means entering the school building between marble tablets engraved with the names of the 103 Hay soldiers who died in World War I, and travelling to and from classes past the honour rolls listing those local people who have served in conflicts since then. The Hay War Memorial High School Museum, one of five in the town, collects and tells the stories of Hay’s war experiences and the history of the school, and is cared for by teachers, students and local volunteers. I used to be the Community Curator in Hay (back when Lucy wasn’t even at school) and it was rewarding to help young people curate their own museum, while learning to be custodians of the stories of young people who had lived in their community a century earlier.

Students at the school undertake research into family members or local soldiers, exploring their experiences before, during and after World War I. So when Lucy arrived at the Museum on Monday, I knew she would be ready for the task I had for her: researching the stories behind a small wood and silver box, with a paper label inside the lid that began ‘To Bob, in memory of Colin’. Here’s what she found out.

I have always been fascinated with how an object or a few documents can tell a person’s story. As a work experience student at the National Museum of Australia, I have been given the opportunity to find out about and piece together one of these stories.

Colin Hales was born in Victoria in 1892, before relocating with his family to South Australia. There, he worked as a printer for the Adelaide Register. In June 1915, Colin left Australia for Egypt with the 27th Battalion, who moved on to Gallipoli in September. In October, Colin was sent home due to a hernia. He was supposed to be departing for France two months later.

When he arrived in Egypt, Colin was allotted to the 5th Division Cyclist Battalion. When the Australian Infantry Force was reorganised under the British New Army Establishment in 1916, there became a need for a group of cyclists for each division. They were similar to cavalry, but not nearly as expensive to maintain.

In June of that year, Colin was shipped off to the Somme battlefield, where he was transferred to the 1st Anzac A.C. Cyclist Battalion, and soon promoted to Lieutenant. When the cyclists were not out fighting on the front line, they were put to use doing some of the other work that needed to be done, such as burial and salvage work, traffic control and signalling, as well as helping some of the local farmers.

Colin and Mabel were only able to spend two days together as a married couple, as Colin was killed in action in La Houssaye on the 20th of December 1916, just a few days short of Christmas. His death was the only death of an officer that the battalion had to deal with throughout the entire war.

The next year it appears that Mabel gave this box as a Christmas gift. It is made of cedar, with a silver plated frame. The frame is engraved with Colin’s initials, ‘CH’, and ‘1911’. Colin might have made the made the box for himself, or it might have been a gift from one of his friends. Both of these options seem likely, as the box itself appears homemade, with a very simple design.

On the inside of the lid, there is an inscription from Mabel which reads ‘To Bob in memory of Colin, May his sacrifice be our Salvation. Christmas 1917, Mabel’. Underneath is written, ‘LIEUT. C. HALES, AUSTRALIAN CYCLIST CORPS,20 DEC 1916, R.I.P.’

Perhaps the owner of the box kept some items that reminded them of Colin inside the box. Maybe it was seen only as a memorial. Maybe Mabel gave the box away because it saddened her to see reminders of her late husband. Or maybe, she just wanted to make sure that he wasn’t forgotten.

Mable’s words ‘May his sacrifice be our salvation’ is a quote that really resonates with me. Coming from one of the only War Memorial schools in the world, we have a strong motivation to remember and honour  the Australians that gave their lives in all conflicts. The school motto, ‘For so much what shall we repay?’ is a constant reminder of what the ANZACs gave up for their country and for future generations. It is a debt we cannot repay or easily forget about.  In a similar way, Mabel wanted to make sure that Colin’s sacrifice was remembered and appreciated amongst the people he had known.

During my time on work experience, I was also given the opportunity to visit the museum’s storage buildings. Only 4% of the museum’s collection is on display at any one time, so it was quite interesting to see how all the other items are stored and conserved.

A reason for the visit was to see Colin’s box in real life. It was a lot smaller than I had originally imagined. It would have only been about 8cm long at the most. I had originally thought that maybe it could have been used to store some of Colin’s possessions that had been sent back from the war – identity discs, a fountain pen, a pencil, a watch, handkerchief, cigarette holder, wallet, photo case, tobacco pouch, letters, photos and cards. Looking at it now, it would have only been big enough to hold a small fraction of the items, which Mabel probably kept for herself anyway.

It continues to amaze me that something as simple as a little wooden box can, almost 100 years later, still begin to tell the story of an ordinary person from the past. There have been so many people before us, which means there are still so many more stories waiting to be discovered.

Colin’s name is recorded on the honour roll at Unley in South Australia.

Thanks to Lucy for her work revealing Colin’s story, and for being a part of the Museum team this week.

If you’re interested in learning more about Australia’s cycling history, you can visit the Freewheeling: Cycling in Australia website, or the exhibition of the same name, which is on tour around Australia at the moment. It opens at the Gold Museum, Ballarat this weekend.

Can you tell us more about Colin’s story? Do you have an object with a special story behind it? Let us know in the comments box below.