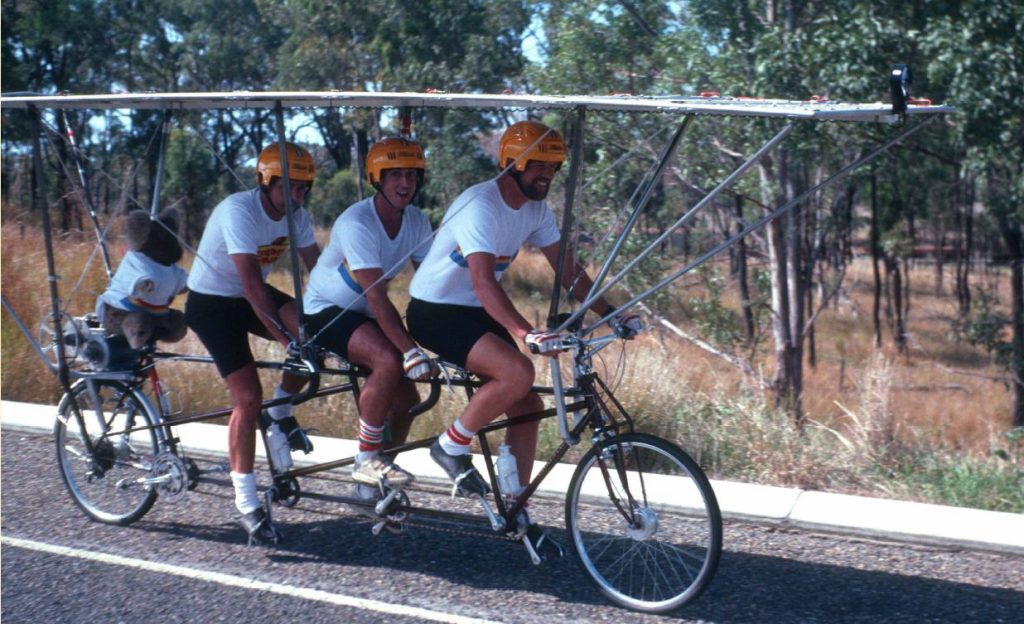 In the late 1970s, a team of researchers at the University of Queensland began dreaming of a vehicle that combined the emerging technology of solar power with good-old fashion leg power. The result was a groundbreaking experimental bicycle known as the ‘Solar Tandem’.
In 1984, Dr Ugur Ortabasi, founding director of the University of Queensland’s Solar Energy Research Centre, unveiled a solar-assisted, battery-less bicycle called the Solar Tandem. The experimental machine proved that solar power and bio-mechanical energy could be combined to create an energy-efficient and economical means of transport. Rather than being stored in batteries, the electrical energy from the solar panels is fed directly into a motor on the rear axle. A clutch and gearing system harmonises the motor’s output with the rider’s pedalling and then transmits the resulting torque to the rear axle. The bicycle was designed and built in Queensland, with only the frame  — made from aircraft tubing — coming from Victoria. The bicycle participated in the 1850 kilometre ‘Great Paper Chase’, a race from Cairns to Brisbane organized by The Courier Mail. The team shared first prize in the Novel Vehicle Class, which attracted around 40 entries.

It’s different from being on a two-seater tandem, let along a four-seater. We had to pedal and not sway from side to side so we didn’t upset the balance, and keep up the speed to avoid tipping over. It felt a little odd a first, but when we were flying we loved it.


Two years later, the bicycle was redesigned and relaunched as the Supernova Australia. Substantially lighter and more efficient, the Supernova competed in the 1986 Tour de Sol from Germany to Switzerland. Despite crashing speed, the team recovered and won first place in their category.
In 2014 the Supernova Consortium donated their bicycle to the Queensland Museum. It is currently on display in conjunction with the NMA’s Freewheeling: Cycling in Australia exhibition. Looking at the display I was first struck by just how unlikely a contraption it first appears. The enormous four-seater tandam supports a giant solar panel, which, at 6 square meters, looks like wing from a light aircraft! The vehicle weighs around 100 kilograms yet can easily reached speeds of 40 km per hour and during a test run in 1984 it exceeded 80 km per hour.

Solar technology is streets ahead of where it was in the 1980s and there are plenty of enterprising types around experimenting and taking on big journeys with solar-assisted vehicles. Indeed, the pioneering work of the Solar Energy Research Centre perhaps inspired a more recent adventure. In 2013, Sam Mitchell travelled around Australia on a solar powered recumbent tricycle, employing a array of solar panels similar to those used on the Solar Tandem/Supernova. Unlike the tandem, however, Mitchell’s set up used the solar panels to charge a battery which then powered a motor. You can read more about Sam’s story at the ABC website and on his great blog.

The creation of the Supernova tandem was driven by a profound faith in the capacity of science and technology to harness bio-mechanical and solar energy. And, yet, despite these technical ingenuity and engineering triumphs, it is a device that transgressed the boundaries between the human and natural worlds, so often defined in rigid opposition. It represented a particular view of the world and its people as a dynamic living system, where renewable human energy could be fused with the energy present in the environment. Above all, it embodied a bigger ambition, deeply relevant to our contemporary concerns, to reactivate the human body and escape our dependence on expensive, polluting and finite sources of energy.
During the 1980s, Dr Ortabasi’s son, Oktay, observed his father’s work. In 2014, he reflected on the project:

As a ten-year-old boy watching the team on
their various adventures, it seemed like just
a way to bring awareness to solar energy.
But I have come to understand that my
father was imagining something entirely
different; a world where human power and
solar power could exist in harmony. That is
a future I would love to see.

[Except where indicated, the images in this article have been provided courtesy of the Solar Tandem Consortium: Stuart Wilson, Jim Allison, Ted de Boer, Ray Barton, Geoff Dwyer, Ugur Ortabasi and Oktay Ortabasi]