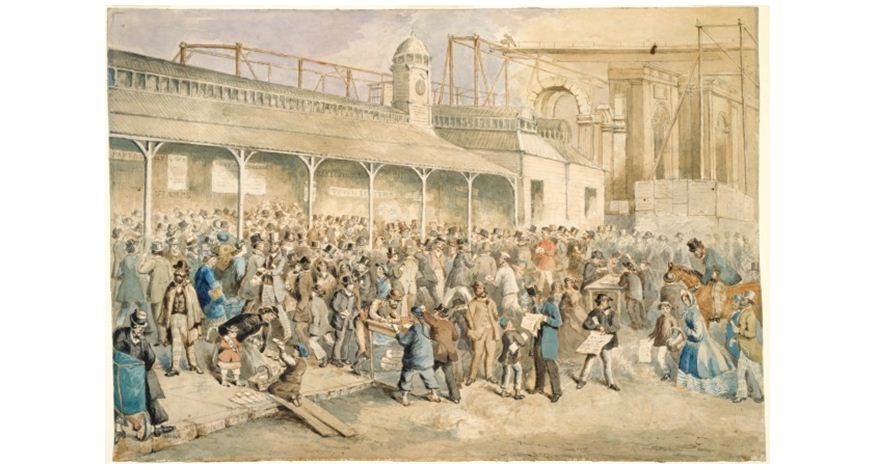 This watercolour painting, English mail day at the Post Office, Melbourne by Nicholas Chevalier, shows a frenzy of activity outside the original post office building at the corner of Bourke and Elizabeth Streets about 1862. People flocked to the post office in anticipation of receiving news from home.

In 1851, the volume of mail in the colony increased significantly as a result of huge population growth following the discovery of gold in Victoria. Prior to 1851, the number of postal items processed by the post office was in the thousands. A year later there was over 1.5 million items. The small wooden post office was no longer suitable for its purpose.

Architects, Thomas Crouch and Ralph Wilson, won a design competition for a new post office and construction began in 1861. The initial stages of the building can be seen in the background of Chevalier’s painting.

My interest in the post office began while researching one of the Museum’s latest acquisitions, a wood engraving showing a panoramic view of the city of Melbourne in about 1875. The engraving was published as a souvenir supplement in The Australasian, a subsidiary of The Argus, but the exact date of publication is unknown. A photograph of St Patrick’s cathedral by Charles Bayliss shows a similar stage of construction as shown in the engraving. The date of the photograph is between 1873 and 1880 which gives us the best indication for an approximate date of the image. St Patrick’s Cathedral appears in the top right hand side of the image, to the left of the Treasury building.

More information about the object can be found in the Melbourne panorama collection highlight. The collection highlight includes a zoom feature on the image and you will also find links to google street views of the city today. The engraving is also on display in our Landmarks gallery.

The technique of wood engraving enabled the artist to create an incredibly detailed image. One detail which captured my imagination is the flag which appears on the tower of the General Post Office building. Why was there a flag with a letter ‘A’ and what did it mean?

These signal flags were used to alert the public of the status of incoming mail, for example, a chequered flag indicated that a ship had been sighted at sea. When a ship arrived at the port the postmaster would hoist a flag at the post office to announce its arrival. Different flags indicated when the mail was sorted, when it was available for collection and its origin.

On 1 July 1867, The Age ran an article about the opening of the new post office. The article mentions the flags but also explains the addition of a ‘monster signal lamp’ which would be hoisted up the flagpole at nightfall.

“The mail flag signals from the tower have already become a thing of the present, but the addition about to be made thereto in the shape of a monster signal lamp is deserving of note….. It will be fitted with twelve gas jets, with silver reflectors, which will enable it to be seen from every point of the compass. Slides corresponding in color to the signal flags fit in the lamp, and will indicate the place from whence the mail arrives.”

In today’s world where we communicate instantly across the globe it is hard to imagine the isolation felt by the population of Victoria in the mid 1800s. The mail was the only method of communication with family back home. It took approximately two months for mail ships to travel from England to Australia. The sight of the flag changing at the post office to announce the arrival of mail must have been a source of much excitement in the community.

Please leave a comment if you know any information about the specific flags that were used by the post office.