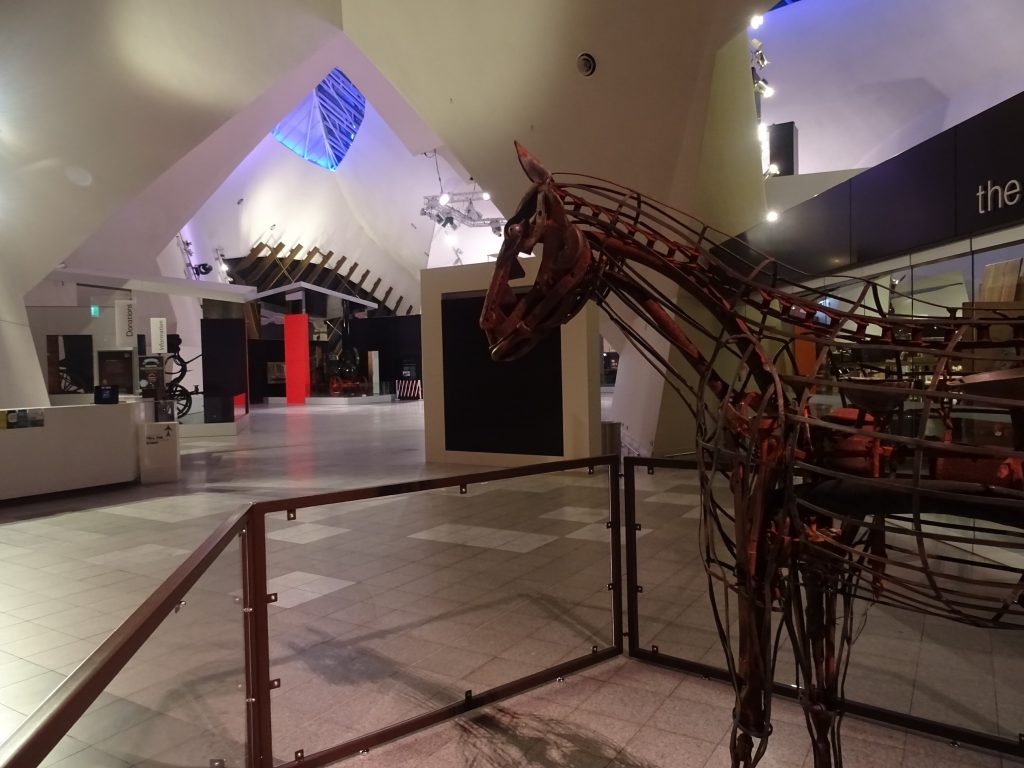 On August 1st, all Australian horses mark their official birthdays. To celebrate the occasion, we’ve installed a striking, life-size equine sculpture in the Museum’s Main Hall, and are calling on Australians to tweet stories and images of how they are celebrating their horse’s birthday.

Artists Suzie Bleach and Andy Townsend, based in Braidwood, NSW, produced the sculpture, titled Adrift, in 2010. It is made of salvaged objects and materials, including steel, copper, wood and rubber hose.

Bleach and Townsend are lending Adrift to the Museum to help launch Spirited: Australia’s Horse Story, a major new National Museum of Australia exhibition opening to the public on 11 September, 2014.

Bleach and Townsend produce sculptures and installations exploring people’s relationships with animals. They often create horse forms, inspired by the thousands of years of ‘symbiosis between humans and horses’.

The horse holds a particular interest for us – its story is intertwined with the story of humans, their bond is often described as mystical. Across cultures the horse is an attribute of power, nobility, strength, stability and endurance but also of grace, beauty, purity and freedom. They are thought of as reliable and trustworthy and companionable. The symbiosis between humans and horses is a fact of history and an idea that has become embedded over eons into our individual and collective consciousness.

Adrift depicts a horse standing upon the deck of a floating vessel, a ring on the bow suggesting a missing anchor or mooring rope. Bleach and Townsend say that ‘the sculpture is allegorical, a poignant reflection on loneliness’, referencing the way in which horses were once, but are no longer, central to our culture and economy.

The horse, standing alone, is quiet, contemplative and poised. It is an image of strength, elegance and calm that simultaneously also suggests a free spirit that lies within.

The artists envisage their sculpture as a ‘touchstone’ that encourages onlookers to ‘recall the stories of their own experience or those of their ancestors’.

After the Museum closed on Wednesday 30 July 2014, members our Conservation, Exhibitions, Curatorial and Registration teams installed the sculpture in the main hall.

The first day of August was chosen as the horses’ official birthday because mares are stimulated to commence their oestrus cycle, or ‘come into season’ and be receptive to mating, as the weather warms in spring. Foals are consequently usually conceived in September or October, and delivered eleven months later. Choosing the first day of August as the horses’ birthday ensures that foals are as close as possible to a year old when mark their first birthday. In the northern hemisphere, the horse’s official birthday is 1 January.

Today, most breed associations recognise 1 August as the horses’ official birthday, and equine ages calculated from this date establish eligibility for a range of official competitions.

How are you celebrating the day?

In concert with the Spirited exhibition, the National Museum is collecting stories and images of how Australians around the country are celebrating their horse’s birthday on August 1, whether it’s with a few extra carrots, a scratch on the neck, or a full-on stable party.

Tweet or Facebook images of you and your horse on its birthday to #nmahorses and #horsesbirthday. The stories will become part of the Australian horse history that the Museum is creating through its Horses in Australia project.

————————————
This post was written by Kirsten Wehner and Martha Sear, with thanks to Suzie Bleach and Andy Townsend.