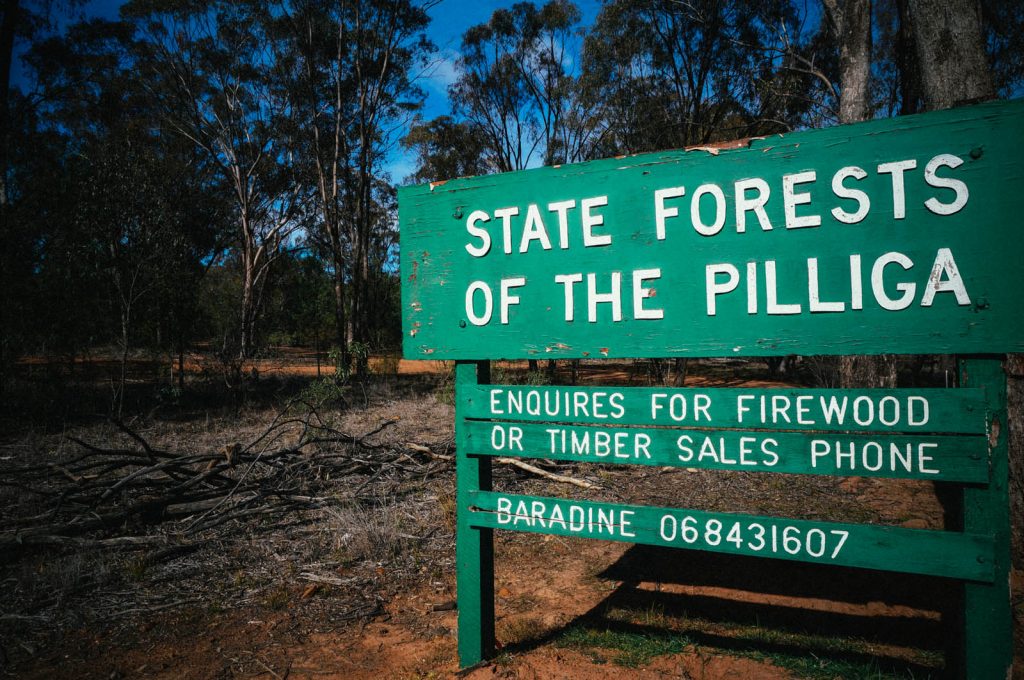 ‘It is busy with trees, with animals and with men. It is lonely and beautiful. It is a million wild acres. And there is no other forest like it.’

The Pilliga is a beaten-up burnt-out forest where the creeks flow underground and the trees grow barely as wide as a child’s arm. Its grasses have been eaten and its soils pulverised, its timber ringbarked and wood-chipped. It is criss-crossed with fire breaks and narrow old logging roads. Wild boars tear out from its sandy watercourses and wind whips dust into your eyes here.

And yet there are a bunch of people lining up to get arrested – to turn their lives upside down – for this ‘scrub’.

An unlikely alliance of farmers, graziers, environmentalists and Aboriginal people is working to prevent coal seam gas development in the Pilliga and surrounding farmland. In July I decided to drive to the North West Plains to find out what was going on.

There were two good reasons to explore the Pilliga. I’m working on a book about toxins in the food chain and I’d heard about contaminated water spills associated with coal seam gas exploration at the Pilliga. Locals are also worried coal seam gas development could affect the groundwater they depend on for irrigation and stock water – some see it as a pathway to contamination of crops and meat.

The second reason was to identify significant material culture and to capture stories about this extraordinary alliance, while it is happening. The Museum holds numerous collections that document protest and social movements such as anti-Vietnam War protests, the Franklin River campaign, demands for Aboriginal fishing rights, and irrigator protests at Griffith, New South Wales, against the recommendations of the Draft Murray Darling Basin Plan in 2010.

The plan was to document what objects might be of interest to the Museum and record some oral history interviews. Halfway there I could see something big was happening. There were bright yellow ‘No Gas’ signs nailed to the trees on the side of the road from Dubbo to Narrabri.

A trip with Tony to the spill sites

I meet Tony Pickard on the side of the highway at the X-Line Road turn-off. He’s a grazier at the Pilliga and he’s offered to show me some of the spill sites before we do a recorded interview.

I pull up behind his battered tray-top ute, 15 minutes late because of roadwork on the Newell, and walk over.

Tony orders me to park my car among the trees and jump in with him.

We travel into the forest along an orange track. Where the road dips you can see sand creeks trailing off into the scrub. Typical of bush utes my door doesn’t have any interior panelling. At first Tony speaks in general terms about where the wells are, how State Forests restricts access, and lays down all the figures, jumping across dates, institutions, and the intricacies of geology and toxicology analysis. He hasn’t smiled once.

He’s wearing two green jumpers. I can tell the colour of the one underneath because the outer one is peppered with fraying holes, some of them darned in neat round lumps. They’re the type clothes that come from a resourceful fix-it-yourself kind of home.

We turn onto a narrow driveway. Running beside it is cleared and silty ground covering an underground gas pipeline.

In 2004 a small gas exploration company fracked its second coal seam at ‘Bibblewindi 1’. Hardly anyone paid attention. A local told me later the Pilliga is the perfect place to work discreetly: you only have to go a few metres back from the road and the dense-packed trees will hide you. No one suspected these mysterious activities in the bush would expand over the next ten years to become a 98,000 hectare project with over 800 wells planned.

One landholder who did notice early was Tony. It was about the time of the Bibblewindi fracking that his bore, located a few kilometres from the gas well, became contaminated. He sees a correlation but the gas company denies responsibility, and the two parties are still locked in dispute.

Here at the first spill site at Bibblewindi Tony’s emotions are still on display. Later I figure it’s the stress of the court case, his frustration at the lack of information available, and the uncertainty over his future.

He’s bending down inspecting salt crusted on the soil and rocks. It’s even rising up into the mulch which the gas company had used in an attempt to rehabilitate the site.

‘If it’s got that much killing power in ten thousand litres, God help us’, says Tony.

It’s obvious where the water produced from well ran over the ground. It looks like bulldozers barged through the forest. Opposite the dead timber is a high-fenced gas facility with turkey nest tanks and a new steel water tower.

Tony gets out his old blue JVC camcorder.

‘We’re at the Bibblewindi spill site, and there’s lots of salt here, on the eastern side of the gas line,’ says Tony. He’s providing commentary for his video recording, documenting the current state of the site.

As I take photos of leaves and tree trunks that look like they are covered in frost, I can hear Tony continuing his narration. ‘Not salt but salts I should say. It’s not as good as it was, it’s getting worse, over here, that rotten stuff, and here we have salt on the stems’.

Next time I look over he’s on all fours with a knife scraping samples into a jar. His do-it-yourself resourcefulness has shaped his approach to his search for answers. Like many around here he’s not satisfied with explanations from a reticent company and a State Government mired in corruption scandals. Tony tells me the soil samples cost anywhere from $140 to $3000 a pop. Some have returned high levels of acids in some places, salts in others, and even uranium which was mobilised by the spill.

Behind us a shiny white twin cab ute creeps up. It’s a gas company vehicle. I hold my camera to my side in a submissive attempt to hide it.

‘Don’t worry about that,’ says Tony. ‘They’re taking photos of you.’

The vehicle keeps rolling by, tyres crunching the gravel, slower than walking pace.

Tony’s camcorder beeps and he begins documenting more dead and dying casuarinas, eucalypts and cypress pine. Locals fear the salts and chemicals from gas well water will work their way through the ground and into the creeks which will carry them to the Namoi and other major rivers used for agriculture.

Perhaps most of all they fear the drilling and accidents and corroding wells will disrupt the geology and ecology of the Great Artesian Basin. This is ancient and precious water in dry country. At the end of the Triassic period, uplift across the vast margins of inland Australia gave the angle and direction water needed to carry sediments into the Carpentaria, Eromanga and Surat Basins – together these form what we know as the Great Artesian Basin. Thousands of ancient streams deposited alternating layers of porous sandstones and impervious clays. During the Cretaceous period the sea overwhelmed the low-lying plains of inland Australia and dumped marine sediments over them. Volcanoes lit up eastern Australia and one hundred thousand cubic kilometres of volcanic rubble washed westwards into the inland sea, just before the sea itself retreated. These dynamic processes created one of the world’s largest aquifers, underlying nearly a quarter of the continent of Australia.

What took millions of years to create could be spoiled for a forty year fossil fuel project.

‘The company says this is a minor incident,’ says Tony. ‘The problem is the accumulative impact.’

By now Tony has forgiven me my lateness, has decided I’m not a spy (a common occurrence on this trip), and smiles, laughing at his jokes about the Pilliga Yowie. He opens up.

‘To be honest, I’m cutting into my super to do this.’

His shoulders slump. His wife is a staunch supporter but it’s hard on their relationship. Some of his friends in the movement tell me later they’re worried for him. Some say he’s a hero but others know this is all taking its toll. It’s not just that his bore water has turned red or the taps in his house are seizing up. It’s not just the impending court case against a mining giant and all its financial costs. It’s the feeling that no one is listening. It’s the suspicion that the locals are being kept in the dark. It’s the division in the community. It’s the pejorative comments about his grazing by high profile politicians who support gas development. That’s why the alliance is so important. It’s too big for one individual.

Three twin cabs with orange lights on their roofs turn up at the Bibblewindi site gate. Private security. It’s time to for us move on to the next spill site.

During the course of trip I recorded oral history interviews with townsfolk, nature lovers, ‘country conservatives’ who feel let down by the major conservative parties, graziers, irrigators and a Gomeroi community leader. These are people setting aside a history of conflict to create a vision for their shared environmental futures. It’s an alliance of national significance with global connections to the politics and material concerns of energy and food security. This moment is worth documenting for posterity, whether the alliance lasts for the long term or not.

I edited two of the interviews for this blog post – hours down to five minutes so you can get a sense their voices.

Kim Revell is an irrigator on the Namoi. At first people in her circle were worried about what coal seam gas development might mean for their water supply. It was about their business. But according to Kim it’s grown to be much more. Farmers, says Kim, are starting to believe in climate change. The technically-minded irrigators want to see investment in large solar arrays in rural Australia as energy alternatives to fossil fuels.

When I visited Narrabri, Kim was helping out at her group’s cake stall in the main street on a chilly Saturday morning. The shortbread biscuits caught a lot of people’s attention. To me they were subtle in their design and this made them even more powerful in their meaning. The yellow triangle, its form recreated here in chocolate icing, has its origins in the early green movement – especially the successful ‘people power’ campaign to save the Franklin River in Tasmania. It is indicative of the diverse and inclusive way in which people can participate in this alliance. Traditionally baking belongs to the private, domestic sphere, but here are subversive political shortbreads – food used in a call to protect farmland. If the Museum ever collected objects such as these, I wonder how Museum conservators might ensure that they lasted forever, or at least beyond morning tea time?

Deborah Briggs is a Gomeroi woman whose father was a sleeper cutter in the Pilliga, and his father before him. She practically grew up in the Pilliga. As a Gomeroi woman she is obliged to protect the waters of the Great Artesian Basin. She is frustrated that governments and businesses go straight to the Land Councils to consult rather than the wider Aboriginal community. Deborah is frequently on Facebook receiving and sharing information about coal seam gas. Something that struck me about the interviews was how it seemed women were the main drivers of the campaigns and that social media was instrumental in the organisation, communication and networking. It has to have played a role in the formation and endurance of this alliance.

Cameron Muir is a Postdoctoral Fellow at the ANU and at the Museum’s Research Centre. He is the author of The Broken Promise of Agricultural Progress: an Environmental History.