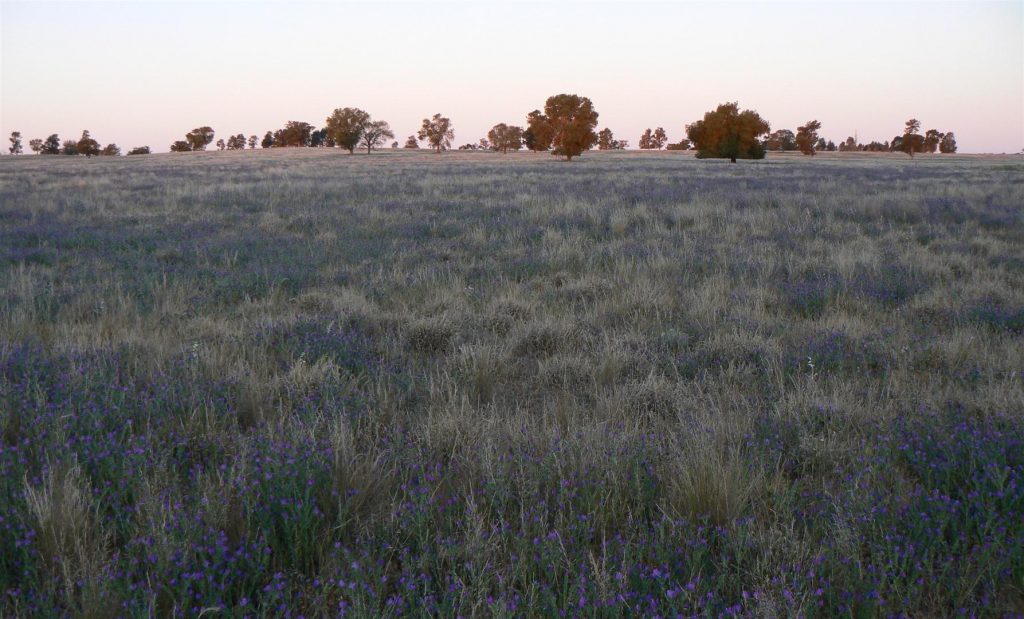 ‘North Taylors’ is the name of a paddock on the relatively fertile southwest slopes of New South Wales, south of the Murrumbidgee River, between the farming towns of Narrandera and Boree Creek.

The sixty-hectare paddock is part of ‘Oakvale,’ a farm owned by the Strong family. Over the past ten years or so, the Strong family has bolstered the resilience and productivity of their land by developing innovative methods of ecological farming. They’ve planted hundreds of thousands of trees and shrubs, sown prime wheat paddocks to perennial saltbush, and implemented grazing strategies that have enabled their country to regenerate in dramatic and exciting ways.

Last year I started a small research project based on North Taylors, called The Paddock Report. The project explores how an intense focus on material and ecological particularities that are present within a locale can reveal relationships between globalised forces of industrial modernity and the dynamic character of a particular place, framed by a contemporary context of rapid climatic, ecological and social change.

At a time when life is determined like never before by vast physical and social phenomena, The Paddock Report places us within material and ecological patterns. Agency, the power to transform, is presented as arising from within an assemblage of both human and non-human components. This approach, I hope, will help to foster alternative and useful understandings about how people might respond to the chaotic changes unfolding around them.

About once a year I visit North Taylors, and afterwards write a short report that is published here, on the National Museum of Australia website. Each report contains photos I’ve taken in the paddock, and my writings seek to bind global issues of climate change and its disruptions to the local, present day realities of this one paddock, its history and possible futures, to draw meaning from encounters with the material particularities of terrain enclosed to produce food and fibre, to keep us fed and warm.

By returning annually to the same paddock, I respond to changes in its material patterns, in vegetation, animals, soils and moisture, and reflect on these physical changes in relation to the productive capacity of the paddock to keep human bodies clothed and fed. Sheep, weeds, wire fences, stone tools, broken machinery parts and other material things encountered inside the paddock are considered in historical and ecological terms, to reveal the cultural and physical processes that have generated the paddock’s material realities at a particular moment in time, and which define the terrain upon which contemporary, globalised forces of nature and culture are acting.

Structurally, the process of a regular return, of an annual encounter that enables reflection on short term changes, interplays with reflection on broader processes of change that encompass deeper time frames into the past and into the future. Interviews and archival research complements the understandings gained from paddock visits.

‘Shadow places’ was the term given by environmental philosopher Val Plumwood to the many unseen terrains ‘that provide our material and ecological support’ and ‘which, in a global market, are likely to elude our knowledge and responsibility.’ North Taylors can be understood as one such shadow place, a rectangle of country responsible for nourishing many thousands of people who have never seen it or know its name.

In response to scholarly interest in place studies and notions of ‘belonging’, Plumwood cautioned against swimming with ‘the current of the self-sufficiency tide’, of honouring too intensely our individual home places. Instead, she argued that a need existed for ‘strong institutional and community networking arrangements’ that enabled people to take responsibility for the many remote, ‘shadow’ places to which we are all materially, ecologically bound. ‘Exchange’ of material goods and money between people living in different places, Plumwood proposed, ‘could also have at its core celebration and exchange of place and place knowledge, and [occur] under conditions of connection, knowledge, care and responsibility.’ The Paddock Report is an attempt to apply the capacities of the National Museum of Australia to, in a small way, provide the sort of institutional and community networks that Plumwood called for.

David Abram argues that in modern societies like Australia, a great need exists to recover human ability for attunement to the particularities of the material and ecological world, in ways that maintain intellectual rigour. Terrain our bodies may directly experience, ‘rippling with cricket rhythms and scoured by the tides, is the very realm now most ravaged by the spreading consequences of our disregard’, argues Abram, and is in need of careful attention. Since the colonisation of Australia began in the late eighteenth century, cultural processes operating in settler society often cast a distant place, Britain, the colonial centre, as the primary source of value and significance. Such processes devalued local particularities and favoured powerful demands and interests arising elsewhere.

By enabling encounters with the material particularities of places and objects, museums engender a way of knowing that counters destructive colonial dynamics and maybe allows useful responses to the crisis of climate change. ‘We are by now so accustomed to the cult of expertise’, argues Abram, ‘that the very notion of honouring and paying heed to our directly felt experience of things — of insects and wooden floors, of broken-down cars and bird-pecked apples and the scents rising from the soil — seems odd and somewhat misguided as a way to find out what’s worth knowing. According to assumptions long held by [Western] civilization’, he continues, ‘the deepest truth of things is concealed behind the appearances, in dimensions inaccessible to our senses.’

Stories, representations and other cultural processes that devalue the local and the particular serve industrial development at great cost. The material terrains our bodies directly experience, ‘rippling with cricket rhythms and scoured by the tides’, writes David Abram, ‘is the very realm now most ravaged by the spreading consequences of our disregard’.

Philosopher Freya Mathews argues that the adoption of a universal perspective, a framework that retreats from the particularity of things, denies the subjectivity of others and refuses dialogue. ‘This is because the subjectivity of others is communicated to us via particulars’, she writes. ‘Communicative cues reside deep within the particularity of things: communicative intent is recognisable only at the level of the particular instance, at those junctures at which behaviour departs from an anticipated norm.’

‘To initiate communication [with the world at large]’, she continues, ‘we must address it at the level of particulars. This requires awareness of intricate patterns of unfolding, attunement to the minutest details in the order and sequence of things; we must be prepared to pay attention to things in their infinite variability.’

It seems to me that museums are uniquely positioned to foster the sort of attunement to particularity that Mathews advocates. By enabling encounters with particular, material things, and with the people, places and other species to which those things are connected, museums enable dialogue and the witnessing of suffering. Dialogue and witnessing give people opportunities to respond, to build the social and ecological links that lend resilience in the face of crisis.