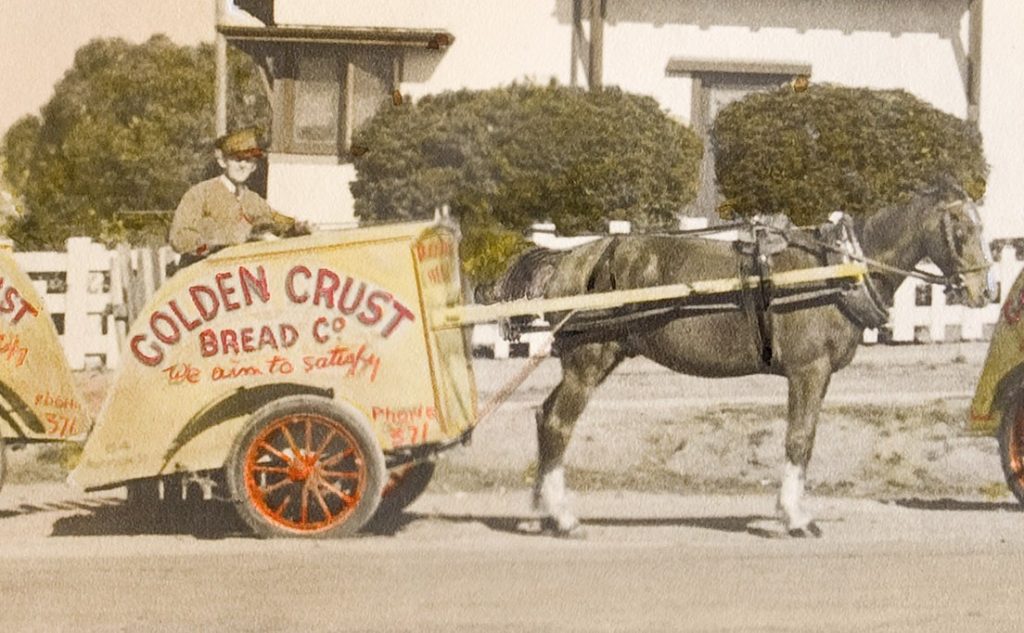 When Museum Friend John Thwaite read about the Horses in Australia project in our ‘The Museum’ magazine he thought we might be interested in a 1938 photograph of the delivery teams at his family’s bakery, the Goulburn Crust Bread Company. John recently had this treasured photograph restored and digitally copied, and in this guest post shares its story.

I understand that the photo was taken to use in the “Australasian Baker and Miller’s Journal” and in a letter from the Editor, dated 14 December 1938 he said, “May we congratulate you on an extremely smart delivery fleet?”

I had some restoration done on the photo which was hand coloured. It is in reasonably good condition for its age but the silver is starting to breakdown. I also had a high quality scan done by a specialist which is the one used here.

My father Robert (Bob) wrote the names of the men on the carts on the back of the photo so as part of the restoration process I had the names placed on the bottom of a scanned copy. The Blue ribbon around the photo is from the 1938 Goulburn Show and was probably awarded for bread.  I do have some prize certificates from other bread shows at that time including Second Prize for their “Married Tin” loaf at the Sydney, Northern Suburbs Bread Exhibition of 1938/9.

I grew up in the house shown in the photo in the 50’s and 60’s and remember the horse and carts very well. One of the most interesting aspects was that some of the horses were so familiar with the delivery route that they would walk to the next house so that the bread carter did not have to go back and get the cart each time.  On the other hand there were a few horses that would occasionally “bolt” and go back to the bakery without the bread carter who would then have to walk back.

Some children also were able to get a lift home on the bread cart after school if they lived on the way back to the bakery.

The carts were made by my grandfather who was also a plumber and builder and had a large workshop next to the bakery. My father’s brother William (Bill) Thwaite was the designer of the carts.

Researching the history of the Golden Crust Bakery for this post, Museum volunteer Kylie Carman-Brown turned up an amusing story.  On 28 June 1935, the Goulburn Evening Penny Post reported on a prospective barrow contest. Two of the bakery employees, Alan Wilson and Jim James, had agreed to a time trial over a three mile course from the bakery to the summit of Governor’s Hill.  It was for a bet, and not with the intention of getting a better appreciation of the delivery horses’ life.

The event was reported in some detail by the paper on 1 July 1935. The full report is here.  Between 200 and 300 people were there to watch the start while others used lorries parked in the streets as grandstands to observe.  Wilson pushed James in the barrow and took 53 minutes, excluding two permitted rest stops.  The whole thing was done for a bet of one pound, and it was reported that neither would attempt it again for less than ten.

Quite why James made this declaration, when he was the reclining passenger for the whole time, is unclear!  Wilson probably never looked at the horses in quite the same way again.  While he was just pushing James and the barrow, they were hauling the weight of the cart, the driver and the bread delivery.

John’s family photograph is a reminder of the days when most household necessities were delivered by horse and cart.

What are your memories of horse-drawn deliveries? Tell us more in the comments box below.