It’s 11pm on a Saturday night and I’ve arrived at Eaglehawk Service Station (about 10 kilometers to the north of Canberra) a little worse for wear. Desperately hungry, I devoured a giant sausage roll and a number of the other “healthy” options on offer. No, this wasn’t the end of a day-long pub crawl or buck’s night. I had, in fact, just spent the day cycling over 300 kilometers with two mates from my cycling club, Audax Australia. One of my more experienced riding companions, Pete Heal, shook my hand: ‘Congratulations’, he said, ‘welcome to the darkside’.

That was back in 2008 and, at that time, it was the longest day ride I had ever attempted. It would be fair to say that I struggled. Things started well enough, rolling westward out of Canberra through Uriarra Crossing and the delightful undulations of Mountain Creek Road towards Wee Jasper, then climbing back up to Yass. There, we made a short stop for refreshments, before continuing on quiet roads through Jerrawa and Dalton. With 140 km done in 7hrs, it was time for a big lunch at Gunning. Next, we pedalled along the Old Hume Highway before tackling the nearby hills (yes, there are plenty of them in central NSW!) and cruised into Goulburn via the backroads. 200km done.

It was 5pm and with over 100km still to ride, yet another meal was in order. Fed and watered by 6pm we rode on for Tarago, donning reflective vests and firing up our lighting systems along the way. Then, things started to get ropey. Despite the regularly meals, I was now running on empty. Constant hill climbing had taken much out of my legs. I had run out of food and had to beg a muesli bar from Mat, who was also cycling his longest ride.

With my energy fading, I could see Pete’s red tail light moving further and further away from me. Yet, it served as lure to keep my legs rotating. I knew that if I lost sight of it, I would slow down even more. I’m sure Pete sensed the struggle going on behind him. He waited in Bungendore until Mat and I caught up. With 60kms to go we dawdled up the relentless Smith’s Gap. Again, Pete waited at the top. And he would keep waiting at regular intervals as we chipped away at the final 50kms to Eaglehawk. The glorious lights of the service station glowed on the horizon. Ten minutes later, we arrived. It was over.

Question: when does pedaling for more than 12 hours in a day stop being fun? Your answer will determine whether you would ever choose Audax as a hobby.

What is Audax? Audax, or randonneuring as it is also known, is a non-competitive cycling sport that developed from Italian endurance riding of the late 19th century. The rules were formalised in France early in the 20th century. Riders aim to complete a course of up to 1200 km within a specified time. Cyclists carry a special card, called a brevet, which is signed at control points along the route to prove they have successfully completed. They are generally expected to be self-sufficient between controls — you carry your own water, food and clothing, with no team car following behind.

Unless you are a freakishly gifted athlete, long distance riding will at some stage take you to the edge of what you thought your body and your mind can cope with. Quite likely, you will face some demons along the way. The mental and physical demands can stir up a gamut of deep emotion, from a will-sapping anxiety to a kind of indescribable euphoria. The foolish grin on the face of a recovering Audax rider can be put down to a quiet sense of achievement, but also to a tsunami of exercise-induced endorphins flooding through their bodies!

At its heart, I think this is what appeals to Audax riders. The rides are less about speed or winning, than they are about simply enjoying the journey, accomplishment, and extending one’s mental and physical capacity. It’s the thrill of wondering what might happen when you skirt close to those edges: the darkside. A space where some riders focus, others fold. Get it right and an Audax ride will leave you with a wonderfully intimate knowledge of the landscape you’ve ridden through and an enduring sense of accomplishment. Get it wrong and you might end up on the side of the road vomiting as your body goes into glycogen debt, having started cannibalising your muscles in order to find energy to keep you going. Audax — it’s Latin for bonkers.

Australian endurance cyclists have skirted the “darkside” for well over a century. Almost as soon as bicycles appeared in the colonies, riders set off on epic journeys around the continent, testing the limits of their new machines and themselves. The creation of the Audax Australia Club in 1981 brought like-minded cyclists together, whereas in the past they might have simply tackled big distances alone or with a few friends.

I soon recovered from my ride and have since gone on to complete greater distances. The following year, Pete decided to cycle solo and unsupported from Fremantle to Sydney. He did so in just over 11 days, breaking the record by a staggering two days. The following year, he pedalled over 15,000 km around Australia in 49 days. Again, setting a new record for a solo and unsupported cycling journey around the continent. 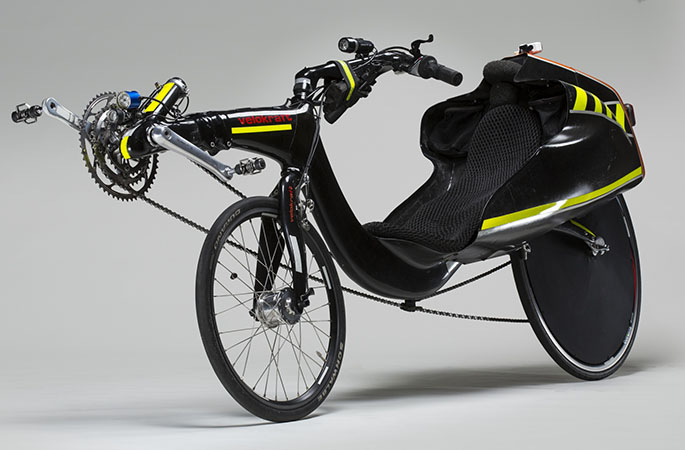 You can see a new collection highlight about Pete’s bike  on the National Museum’s Cycling in Australia website.