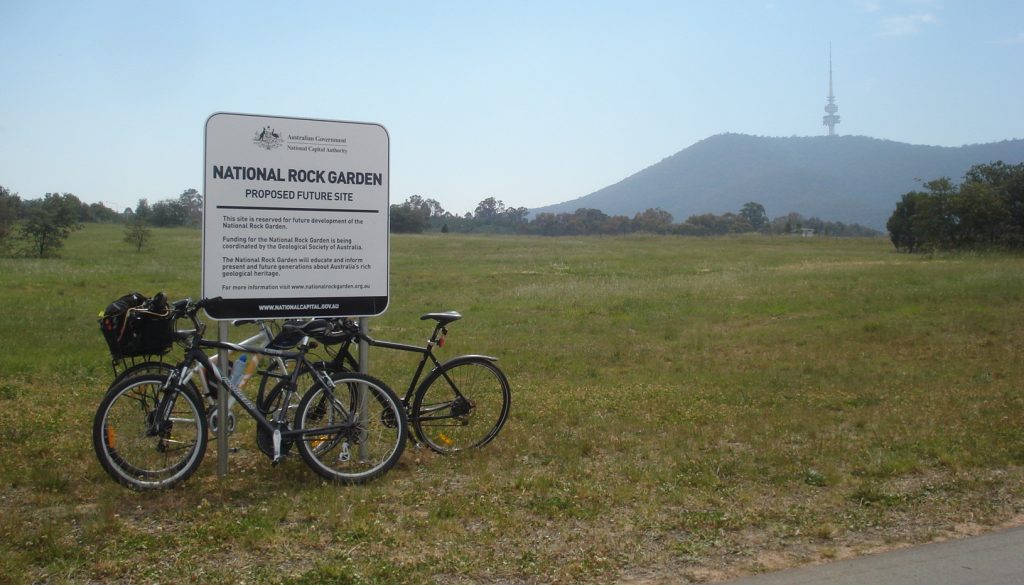 It was an eerie, smoky morning on Sunday the 20th of October, 2013. With the smell of the New South Wales bushfires in the air, Chief Minister Katy Gallagher formally opened the first stage of the National Rock Garden as part of the celebrations of the Centenary of Canberra. This was oddly appropriate, as it was the 2003 Canberra fires that opened up this space for the National Rock Garden and its far more extensive neighbour, the National Arboretum.

Looking up the hill to the National Arboretum from the new National Rock Garden site. Photo by Libby Robin.

Brad Pillans, Australian National University earth scientist and enthusiastic member of the Geological Society of Australia has already gathered extraordinary support for the idea from the University and the Society, and also the National Capital Authority, who cheerfully designated the land at the gateway to the National Arboretum for this purpose.

The Rock Garden will quickly catch up, as ‘you don’t have to wait for rocks to grow’, as visionary earth scientist, Brad Pillans enthused. Photo by Libby Robin.

Pillans has chaired a planning group that includes National Museum of Australia archaeologist Mike Smith (a former leader of the People and the Environment program). Support for the gardens has also come from local Aboriginal people: local elder Matilda House and her brother, Albert welcomed us and the monoliths to country.
The garden celebrates geological heritage, but also neatly captures the ‘national’ in its Federation Rocks display. The Federation Rocks are laid out in historical settlement order from the Hawkesbury Sandstone that built the first colony in New South Wales to the symbolic Limestone of the Australian Capital Territory, the last of the line to achieve self-government. In fact the Federation Rocks will move slightly up the hill once the beautiful garden plan by Taylor, Cullity and Lethlean, designers of the adjacent National Arboretum, is completed.

National Museum of Australia Senior Research Fellow Mike Smith with the Northern Territory’s Mount Goyder Syenite, Proterozoic rock from the Mount Bundey Quarry, just south of Darwin. A face of the rock, just next to the plaque, has been polished to show its colour. Photo by Libby Robin.

As we dispersed to inspect the plans for development in a marquee sponsored by the Society, Brad Pillans – clearly passionate about his subject – urged us to ‘hug the exhibits’ – something we can’t always do in a museum.

A young visitor admires the polished Banded Iron Formation from the Archaean period in the Pilbara. The Western Australian monolith is still wending its way across the continent but Geoscience Australia stepped into the breach with this stunning specimen to complete the series for the event. Photo by Libby Robin.