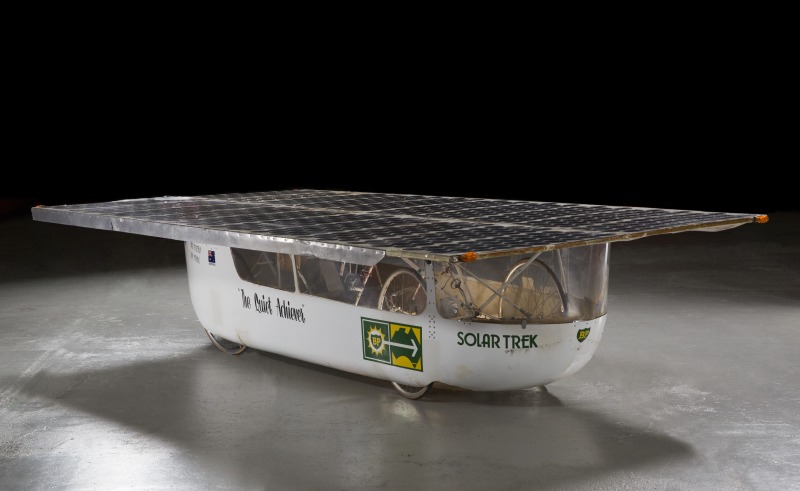 On the 19th of December 1982, ‘The Quiet Achiever’, a solar powered car driven by Hans Tholstrup, departed Perth’s Scarborough Beach on a journey across the country. It arrived at the Sydney Opera House on the 7th of January 1983, becoming the first vehicle to be driven across a continent using nothing more than solar energy. Now, a Japanese team has begun a project to build a ‘Quiet Achiever II’.

The team from the Solar Car Archaeology Research Institute plan to build a solar powered car based on the design of the original ‘Quiet Achiever’, but incorporating the most up to date technologies. As part of their research, the team visited the Museum to see first-hand how the original Solar Trek car was designed, and to meet Hans Tholstrup, the man who conceived the idea of a transcontinental solar journey.

The Solar Trek challenge was not Hans Tholstrup’s first large-scale adventure. In 1970, he circumnavigated Australia in a 4.9-metre speedboat. Some of his other adventures include piloting a single engine aircraft solo around the world, crossing Bass Strait in a mini-moke strapped to a rubber dinghy, riding a motorcycle around the world in 27 days, driving from the northern most point of Europe to the southern tip of Africa, and crossing the north Atlantic in a speedboat.

Tholstrup conceived the idea of a solar powered transcontinental journey to raise awareness and motivate research into solar power. The project was sponsored by BP, who, through a subsidiary, supplied the photovoltaic solar modules used to power the vehicle. Champion racing driver Larry Perkins designed and hand-built ‘The Quiet Achiever’ with his brother Garry, and shared driving duties on the journey with Hans Tholstrup.

The Museum acquired ‘The Quiet Achiever’ in 1984. It complements the Museum’s collection of historic vehicles, which includes horse-drawn carriages and carts, bicycles, planes, boats and some of the nation’s most significant cars. In fact ‘The Quiet Achiever’ is housed, somewhat appropriately, alongside the Bean car of Francis Birtles, whose historic journey across the Australian continent in a motor vehicle from Fremantle to Sydney in 1912 provided some of the inspiration for Hans Tholstrup’s Solar Trek adventure in 1982.

‘The Quiet Achiever’ addresses a number of the Museum’s key themes including the history of scientific innovation, exploration, people’s relationship with the environment, and the future challenges of energy shortages and carbon pollution.

The transcontinental nature of the journey is also a central theme for a number of feats and events of great significance to the nation: Australia’s first peoples, of course, developed and maintained social connections and trade routes on a transcontinental scale; the construction of the Overland Telegraph Line and the Trans-Australian Railway were monumental feats of engineering that span the continent; and while the successful crossing of the continent by John McDouall Stuart is recognised as a significant achievement, the tragedy of Burke and Wills and the failed attempt by Ludwig Leichhardt to traverse the continent from east to west live equally large in Australia’s collective memory.

One of the enduring legacies of Tholstrup and Perkins’ Solar Trek journey is the World Solar Challenge, which grew out of the event and brings together some of the brightest minds from around the world to compete biennially in a solar powered race across Australia. The competition’s objective is to promote research into solar powered technologies. It started in 1987 with 13 entrants from five countries, and in 2015 attracted 43 teams from 13 countries.

The race is now managed by Chris Selwood, who accompanied Hans Tholstrup to the Museum to meet members of the ‘Quiet Achiever II’ project team. They intend to enter the car in the 2017 World Solar Challenge.

‘The Quiet Achiever’ demonstrates the potential of individuals and organisations to innovate and seek solutions to critical issues such as global warming and future energy needs. As Hans Tholstrup said prior to his pioneering journey in 1982, “We hope that by making this 4,000 kilometre BP Solar Trek we will motivate people to solve whatever problems are before us … if it will motivate just one more idea and thought in the development of solar power, then the venture will be well worthwhile”.