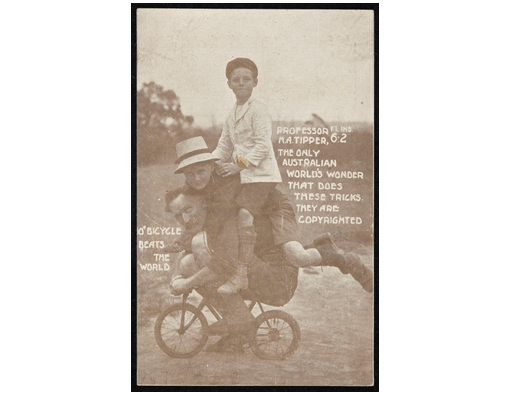 In what must surely rate as one of the most bizarre career choices in Australian history, Alfred Henry Tipper, a 6 ft 2 inches tall Victorian man, decided to start making his own range of tiny bicycles and tour the globe. The National Museum recently acquired a postcard depicting the intriguing Mr Tipper, in 1919, showing off one of his-10 inch bicycles and his ability to ride while carrying two children. We are now on the lookout for one of his bikes!

It seems the conventional life was never an option for Mr Tipper. Born in 1867, the young Tipper grew up a ward of the state working farms and properties in eastern Victoria. By his mid-20s, he had worked variously as a horse-breaker, sailor, cook, butcher, wood-chopper, gold miner, a professional cyclist and an amateur pugilist. A more respectable life, however, appeared likely when he married in 1894. His wife purchased a bicycle repair shop in Sydney and the restless Tipper settled into the business, making his own bicycles under the ‘Royal Ophir’ brand. Along with sponsoring cycle races, he created a series of miniature bicycles (with wheels of between 5 and 10 inches) which he demonstrated at towns and agricultural shows across the country. The sight of a solidly built man 6feet 2inches tall furiously pedalling one of his miniature creations did not easily escape the mind. Particularly fond of the ‘feats of strength’ mode of entertainment, Tipper challenged riders of conventional bicycles to races and in another of Tipper’s prize-winning acts he would tow a sulky carrying a 9 stone (57 kg) lad.

1908 wasn’t a good year. The business failed and so did his marriage. It was time for a change. The natural choice for Tipper, it seems, was to pack a collection of his tiny bicycles and go on a world tour. He travelled his show to South Africa, the UK, Ireland and across the United States, capitalising on an apparent ‘mania’ for miniature bicycles. The compelling shows involved singing and ‘comedy’ cycling, carrying a man or small children on his back, turning at slow speeds and racing against regular-sized bicycles. Audience members were then invited to have a go themselves. He claimed to have ridden over 40,000km over the next six years, although it is somewhat unclear if he completed the epic tour actually riding the mini bicycles! Given Tipper’s form, however, one could be forgiven for thinking that he was bonkers enough to attempt it.

He returned to Australia in 1914 and continued to travel and perform, adopting the title ‘Professor’ in his self-promotions. Not everyone was enamoured with Tipper’s penchant for publicity and spectacle. One reviewer found the Professor a ‘grotesque figure’ who ‘reminded him of a large tarantula crawling about as he cut figure 8s’ on his little bicycle.

The mania didn’t last. By the 1930s, Tipper was part-owner of a bike shop in Richmond, Melbourne, now living in a horse-drawn caravan made from the body of an old Ford motor car. Sporting a flowing grey beard Tipper became an advocate for “rational dress”, which meant he draped his still lithe 70-year-old frame in little more than a thin shirt and short pants. Yet, his passion for the wheel remained strong and each summer he still set off with a selection of bicycles, performed tricks and taught children to ride. He also turned his mind to bicycle inspired inventions. A bicycle merry-go round, a bicycle luggage trailer and designs for a bicycle-powered aeroplane, were just some of the products of Tipper’s fertile imagination.

The patents office holds the records of these inventions. None of his miniature bicycles, however, appear to have survived.

Eccentric seems a pallid description for the extraordinary Professor Tipper. Perhaps you know more about his life? Perhaps you have seen one of his tiny bikes? We’d love to hear about it.