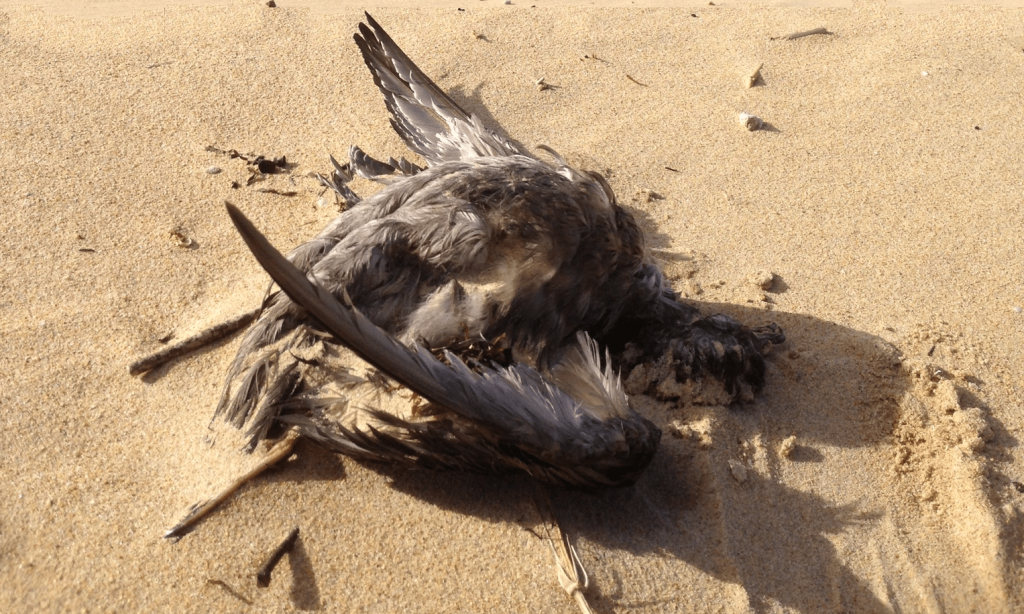 Not what you were expecting?

When I walked the beaches of the far south coast a few weeks ago, I wasn’t expecting it either. The usually empty stretches of sand were littered with the dead and dying bodies of hundreds upon hundreds of short-tail shearwaters, commonly called mutton-birds. These events are called ‘wrecks’. They occur when these migratory birds return to Australia to breed after a journey of some 15,000 kilometres from the Bering Sea near eastern Russia, Canada and Alaska. If they are unable to feed or rest in calm water, they can perish in their thousands. They then wash up on the beach, exhausted, emaciated and half drowned.

That word: wreck. It is a powerful word, charged with meaning for humans. The word is lodged in our imaginations, associated with catastrophic loss, violence and death. For earlier generations, when ships were a common form of passenger transport, few words were more likely to induce fear and desperate panic. Many shipwrecks in Australia were never discovered, with hundreds dying and washing up on the shores of some of the most remote and inhospitable places on earth.

This year, the shearwater wrecks have been observed and reported by many, right along the populous eastern seaboard. ‘It’s just nature’, some say. Of course, people say this because they are struggling to cope with the close witness of suffering and death. It suggests passivity and helplessness. At worst, it suggests the absence of responsibility. Shearwater wrecks, the news reports tell us, are relatively common. Natural. Part of the brutal process of natural selection that removes the weak from the breeding stock. And, anyway, they are among Australia’s most common bird species, numbering over 20 million.

But some observers are not so sure. The recent wrecks all along the eastern seaboard seem to be more numerous and extensive, caused by a combination of a depleted sources of food and wild weather, which prevented the hungry birds from feeding. The numbers of crustaceans, on which they feed, have fallen due to warming sea temperatures. Not as robust as mature birds, the thousands of birds wiped out this year were young. They were the future breeders.

Mutton-birds have nourished Indigenous and non-Indigenous Australians for generations. The National Museum of Australia has an extensive collection of objects, paintings, photographs and costumes that document the economic and cultural significance of a mutton-birding, particularly from the Furneaux Islands in Bass Strait.

Perhaps, too, wrecks will change our experience and perception of the beach. Australians have long celebrated the seaside as a public stage for physical expression and pleasure. That hedonistic beach culture has been a projection of Australia’s sense of isolation and invincibility. It is worth remembering  that the prospect of an Asian invasion during the Second World War dramatically ruptured that confidence. Great stretches of golden sand – a space for pleasure – became a symbol of vulnerability, an vast opening for threats from the outside world.

Walking among the twisted and bloated bodies of these astounding birds, it seems timely to consider our relationship to this species, how we are connected to its lifecycle, its great journey across half the world and, of course, the very forces that, this year, caused the great wrecks on our beaches.