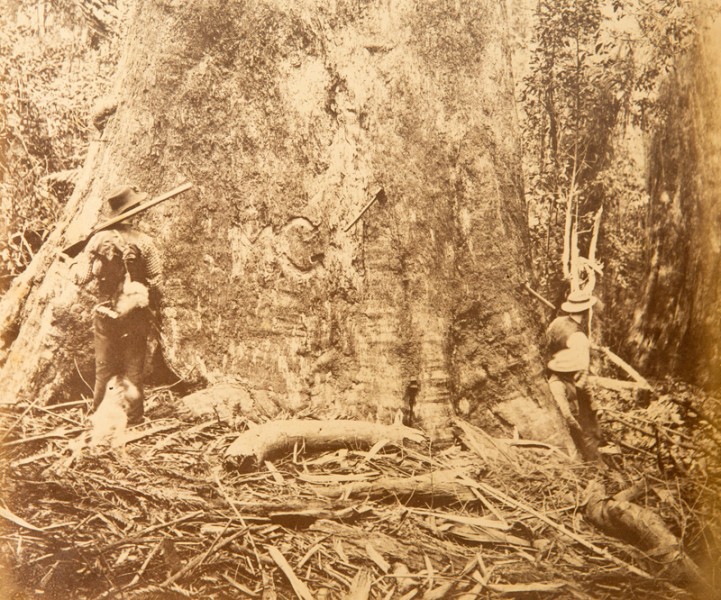 How does a tree get a name – and a portrait?

A few weeks ago, ABC Radio National invited listeners to reflect on ‘Trees I’ve Loved, Trees I’ve Lost’. More than 550 stories, a 360documentaries program, and a vibrant talkback session on Life Matters, were the results – testament to people’s ‘deeply felt communion’ with trees.

Listening in got me thinking about one particular tree whose portrait has just joined the Museum’s collection.

‘Big Ben’ was a Mountain Ash living near the Black Spur Road in Victoria’s Dandenong Ranges, when sometime around 1880 photographer Nicholas Caire captured this image with a dry plate camera.

Caire had built a lucrative business from depictions of the ash and fern forests of the Dandenongs and Gippsland. In his book The Colonial Earth environmental lawyer and cultural historian Tim Bonyhady has written about how, for more than 20 years, Caire pursued the mountain ash trees ‘with a fervour unmatched by any other colonial artist, naming them and writing evocatively about them as individuals. By the time he died, “he knew all the giant trees of Gippsland and could talk interestingly of their age, height, dimensions and family history”’.

Bonyhady thinks it was Caire who first named the trees, following a trend in the USA’s big tree forests but calling them ‘patriarchs’, where the trees of California were more commonly given female names. In the 1870s he named a blackbutt on the road to Black Spur ‘Uncle Sam’. He then named a mountain ash about a mile and a half further on ‘Big Ben’. He later described Ben as the ‘parent of the Black Spur forest, a splendid specimen on E amygdalina*, with a solid trunk, without a sign of decay, 57 feet in girth.’ He continued ‘Poor “Ben” was unprotected …and was caught in the great bush-fires of 1902, and killed’. Ash needs fire to regenerate, but can be destroyed by fierce blazes.

Caire believed that the trees may be among the oldest living things on earth, and were possibly taller than the redwoods of California. Environmental historian Tom Griffiths, who has written extensively on the history of the ash forests, talks of how many, including Caire, believed there were perhaps 3000 years old, although more recent science puts their lifespan closer to 400 years. When Big Ben died, Caire wrote that ‘[h]e was probably a sapling when the people of England were semi-barbaric.’

Caire and others including botanist Ferdinand von Mueller wondered at and lamented the passing of these trees, but Bonyhady argues that Caire ‘implicitly accepted their destruction’. He observes that the common feature of all of Caire’s ash images is that the trees are dead – either burnt or without leaves, or in the process of being chopped down. The tree in the photograph we’ve just acquired is not yet dead, but has axes embedded in it, is blazed with large letters, and was later killed by a bushfire. Caire despaired that the trees were ‘regarded as so much firewood’, but hoped that his images would offer ‘authentic records’ for those who in the future might doubt their existence. He also expressed the wish that the images would stimulate ‘an effort to conserve and protect some of the finest specimens.’

Almost all of the trees that Caire named in his ‘Giant Land’ are gone, but the Mountain Ash forests remain, now known to be home to the world’s tallest flowering trees, growing to over 100 metres high.

Caire’s admiration, awe, affection, and fears for the forests of the Dandenongs found a focal point in specific trees he could name, as well as frame.

My family has a tradition of naming trees for friends and family members, many of whom actually planted the tiny saplings. Most of them now tower over the house, showering it with bark and leaves, knocking on the roof with their heavy limbs, and beckoning to distant fires. But we can’t cut them down – because they ‘are somebody’. The people and the trees have merged into one.

Have you given a tree a name? Why did you do it? Or do you know a tree with a name? We’d love you to tell us about it, using the comments box below.

If you’d like to find out more, you could read:

*It seems that the species we know as Mountain Ash, Eucalyptus Regnans, was known in the nineteenth century as Eucalyptus Amygdalina Regnans.