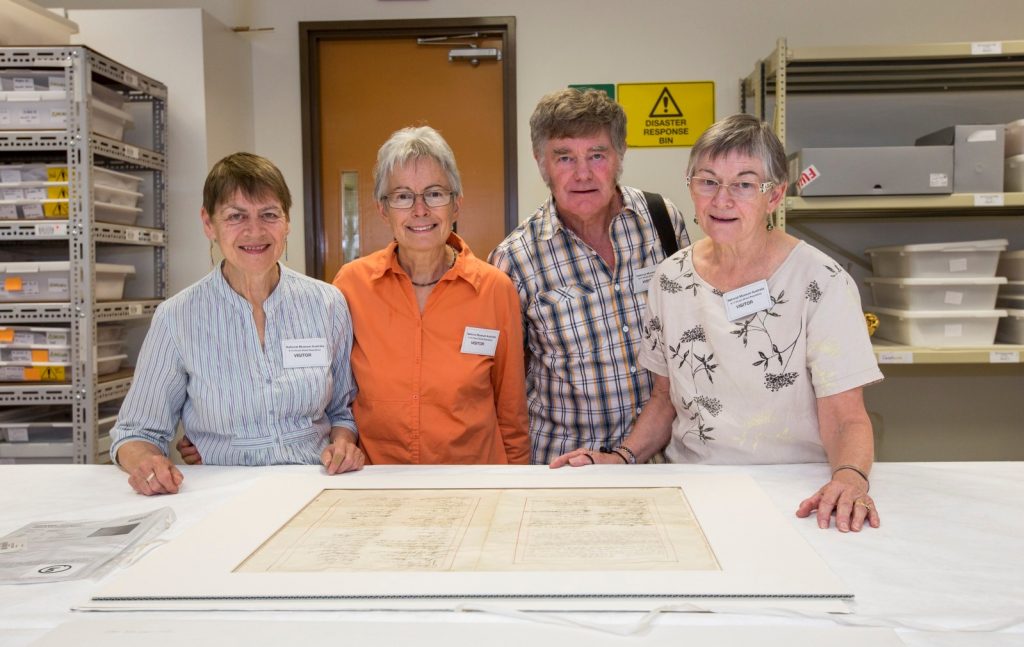 Don’t we all wish we had some heroism in our family line?  Somebody to be proud of and whose courage and spirit we perhaps could hope to have inherited? Well this is not just a wish but reality for one group of cousins who recently visited the Museum to view prized family heirlooms that commemorate their ancestors’ famed bravery. The cousins – Andrea Leuning, Tim McGhie, Belinda Dale and Charlotte Engler – are four of the great great grandchildren of David and Amelia Campbell, who in 1863 defended their property against attack by infamous bushranger Ben Hall and two of his gang members, John O’Meally and John Gilbert.

The Campbell property, named Goimbla, was located in the Lachlan Valley near Eugowra, central western New South Wales – a region where mobs of bushrangers, led variously by Ben Hall and Frank Gardiner, flourished in the 1860s.  The recent discovery of gold in the area had brought in wealth and a new assertion of law and order, however many of the local settlers, who ran cattle on small holdings for very little return, remained poor.  Resentful of authority and their impoverished lot, they often dabbled in petty crime and some, like Hall and O’Meally, spiralled into professional criminals.  Having previously participated in their pursuit and made strong public statements against their activities, David Campbell was known for his negative feelings toward bushrangers and it was this resistance to their public violence and disorder that appears to have motivated the attack of 19 November 1863.

On that date, the three bushrangers – Hall, O’Meally and Gilbert – alighted from their nearby hideout in Nangar National Park and conducted a night raid on the Campbell’s Goimbla Homestead.  After being confronted by the men on his home’s verandah, Campbell fired on the gang, who in turn set fire to the family’s hay-filled shed and stables, where Campbell’s prized racehorses were kept and perished.  Amelia fetched another gun and ammunition to assist her husband, who sought cover outside and by the light of the blaze fired at the gang, killing O’Meally while the other two fled.  The heroic efforts of the Campbell’s, in repelling the attack and, by killing O’Meally, breaking up the gang that had so long terrorised the region, inspired the people of Forbes to raise £1,000 to compensate them for the loss of their property and livestock.

In addition to the monetary donation, the local community also presented the couple with a number of gifts, including a stitched silk cloth bearing a testament to the Campbell’s heroism and a letter of sympathy on parchment from undersigned ‘inhabitants of Forbes’, commiserating with them on their ordeal.  In recognition of her central role in the slaying of O’Meally, Amelia was presented with an ornate, silver-plated coffee urn that bears the following inscription: “The ladies of Upper & Middle Adelong present this token of esteem to Mrs Campbell as an appreciation of her heroic conduct displayed during the attack at Goimbla by bushrangers on 19th Nov. 1863.”.  Handed down through the family, all three of these invaluable heirlooms commemorate and bear witness to the Campbell’s bravery and were presented to the Museum by two of their granddaughters, Mrs V A Hope and Mrs R G Hanmer.  Forming the Veda Hope collection, the gifts are part of a rich assembly of Museum objects associated with Ben Hall and the wider history of Australian bushrangers and all, except for the letter on parchment, are currently on display in the Lachlan Valley exhibit of the Museum’s Landmarks gallery.

Goimbla homestead burnt down in 1935, however the story of the dramatic events that transpired there all those years ago has not been forgotten.  It lives on not only at the National Museum, but in the hearts and minds of David and Amelia’s descendants; in two paintings by Patrick Marony – one featuring portraits of Mr. & Mrs. Campbell and the other showing the Bushrangers attacking Goimbla Station; and through the community of Eugowra, which this weekend will stage a re-enactment of the attack.

At 7.30pm on 16 November 2013, the re-enactment of the ‘Battle of Goimbla’ will be presented by the Eugowra Historical Society as a celebration of the sesquicentenary of the original attack.  All those involved will be dressed in period clothes, either as colonials or as outlaws, and a letter describing the raid – which was written by Amelia Campbell to her mother – will be read by one of the Campbell’s descendants, Nicole Leuning, who at 36 is a similar age to what Amelia was in 1863.  Nicole will be joined at the event by the family members who visited the Museum last week, including her mother Andrea Leuning (nee Dale), as well as undoubtedly a good portion of the Eugowra community, as the event is open to the public.

The re-enactment follows another of the Society’s successful local history events – a re-enactment, held in June 2012, marking the sesquicentenary of the Escort Rock Gold Robbery.  Carried out by a gang of Lachlan Vallery bushrangers, including John O’Meally, the year before their attack on Goimbla, the story of this historic robbery features alongside that of the Campbell’s in the Lachlan Valley exhibit of the Museum’s Landmarks gallery.

So did one of your ancestors perhaps similarly brave a brush with bushrangers or other dangerous villains?  Or maybe their involvement in an important historic event revealed inspiring courage, which is now cherished by your family?  For me, it is my maternal grandfather that comes to mind, who as a teenager joined the Polish Home Army in their fight against Nazi invasion.  But I would also like to hear from you – any heroic kin in your family tree?  And if so, how do you commemorate their memory?