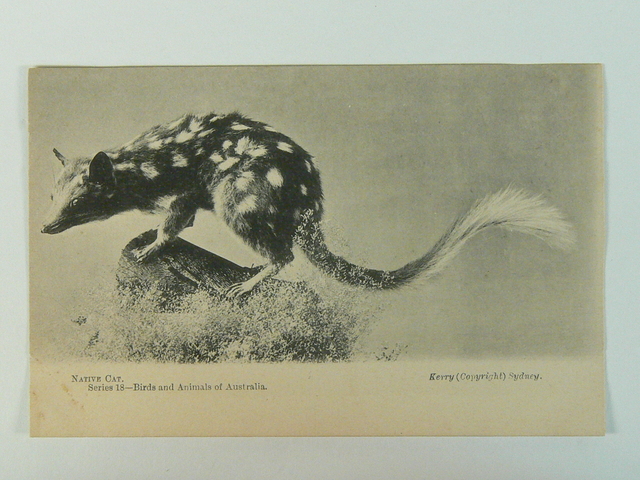 On National Threatened Species Day, take a moment to think about the quoll.

The quoll is a nocturnal carnivorous Australian marsupial with a long nose and tail, and distinctive white spots on its brown fur. There are four species of quoll, the northern, spotted-tailed, eastern and western quolls, and in the recent past, most areas of Australia would have been populated by at least one of the four. Captain Cook recorded ‘quoll’ as an Aboriginal name for these animals, but they have also been known as ‘native cats’, ‘native polecats’ or ‘native martens’. They were once widespread across Australia, but land clearing and degradation, predation by foxes, cats and dogs, baits intended for other species, fire, and possibly disease have dramatically reduced their numbers and range.

I’m reminded of quolls today thanks to a new Collection Reflection by artist Amanda Stuart. Amanda has been working as an artist-in-residence with the Museum’s People and the Environment curatorial team. She became fascinated by a ‘cat skin’ rug made by Ena Harris at the Monaro property Springwell, which is now in the National Historical Collection.

A close look at the rug revealed that nestled beside the skins of 24 introduced cats (Felis catus) was the skin of one ‘native cat’ – a spotted-tailed quoll.

Spotted-tailed, or tiger, quolls (Dasyurus maculatus) are the largest native carnivores on mainland Australia. They live in forest, woodland and coastal heath country, and eat birds, medium-sized mammals and reptiles. Their range includes the segments of south-eastern seaboard in Queensland, New South Wales and Victoria, and Tasmania. It once extended further inland in Victoria and South Australia, and the spotted-tailed quoll is now considered an uncommon species in most of its range – including in the Australian Alps, where the rug was made. It is listed as a vulnerable species nationally.

Quolls don’t feature strongly in the National Historical Collection. They appear in a small number of Indigenous artworks, and there are around 25 quoll specimens in the Australian Institute of Anatomy collection, including compete animals and dissected body parts.

For a number of years we have been on the lookout for a quoll skin rug to add to our collections of platypus, rabbit, water rat and possum fur items. Native cat skins were popular for use in driving rugs, or by bushmen as camping blankets.

In the past, the fur trade and the pot shots of poultry owners keen to keep them away from their coops, contributed to the quoll’s vulnerability. Now it is land clearing, which destroys den sites, decreases prey numbers, and separates populations that arguably poses the greatest threat to their survival.

Many people are working to protect the quoll, including the Quoll Seekers Network, the Australian Quoll Conservancy, and the Conservation Ecology Centre which is using scent-trained dogs to detect tiger quoll scat in the wild. Some argue that one way to preserve the species would be to adopt them as pets, although there is a vigorous debate about whether this is a good idea.

National Threatened Species Day marks the day the last Thylacine died in captivity. Today I’m thinking about one of the ‘tiger’s’ relatives, the quolls, who kilo-for-kilo have the second strongest bite of any predatory mammal in the world, and whose ear-splitting call sounds very like a circular saw.

Do you have a quoll story to tell? Let us know in the comments section below.

The feature image is taken from a postcard of a ‘Native Cat’ by Kerry and Co, around 1900. National Museum of Australia.