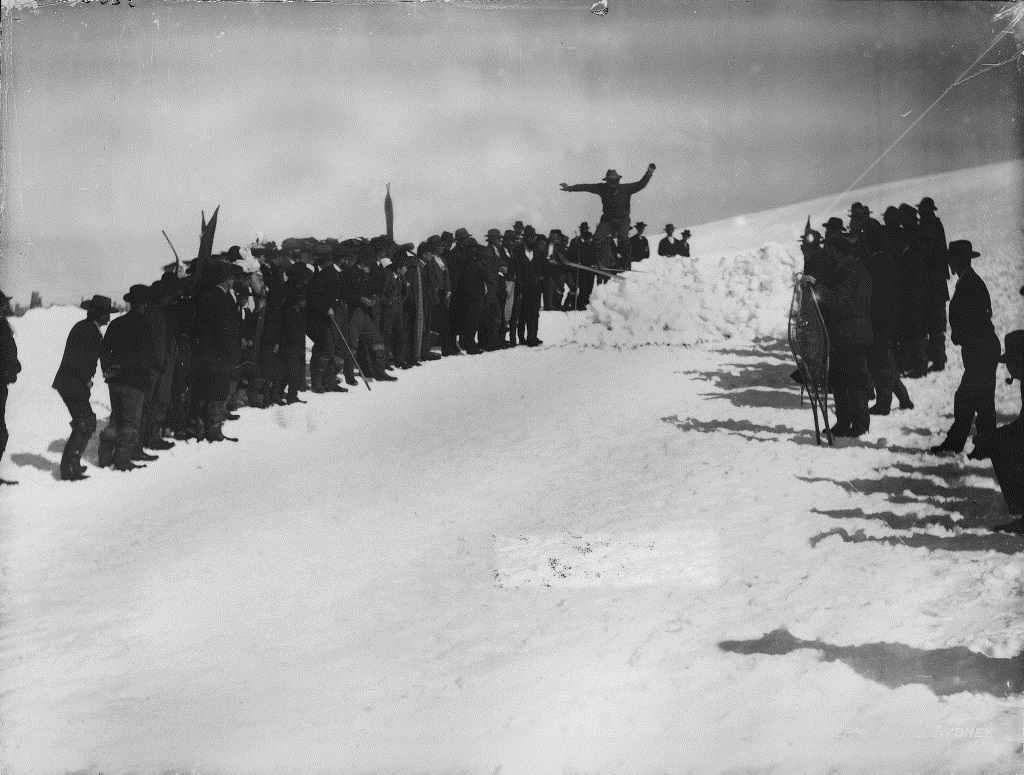 On 1 August 1898, a crowd gathered at Township Hill in the Snowy Mountains for the Kiandra Snow Shoe Club’s annual race meet.

Kiandra, in the Snowy Mountains of New South Wales, had seen a short-lived gold rush in 1859-60, when more than 10,000 people were living and working the field, but within a year the alpine weather conditions, illness and limited building materials had driven most away. A small number of miners, including several from China, continued to sluice for auriferous gold over the ensuing decades and Kiandra grew into the highest altitude town in the Australian colonies.

When the winter snow brought mining to a halt, the community turned to alpine sport, including snow shoeing, now known as ‘skiing’. Norwegian miners introduced the long turned up skis popular in their homeland, made from local mountain ash. Judith Hickson has documented the history of these Norwegian-style ‘snow shoes’ – which we know as skis – in an article in ReCollections.

There’s been a vigorous debate over when organised snow shoe groups formed. In his book Kiandra: Gold Fields to Ski Fields, Norman Clarke has outlined a claim that the Kiandra Snow Shoe Club can trace its origins to 1861, which would make it, along with a Norwegian group formed in the same year, the oldest skiing club in the world. Wendy Cross, in her book Australian Skiing: The first 100 years, disputes this.

Nonetheless, by 1898 the annual snow shoe races were well established, offering a large program of events, including eight races for children and ten for adults, with locals competing against Sydney visitors led by the photographer Charles Kerry. The course was located on the eastern slope of Township Hill, with a length of 22 chains (442.5705m) and a drop of 450 feet (137.1600m). Heavy snow had fallen throughout the previous week, and on the day, competition took place in hail, snow and strong winds.

The Museum has recently acquired a set of skis worn by one of the competitors. The collection consists of a pair of handmade wooden skis with red and black painted decoration.

Newspaper reports mark the race day as Monday 1 August, rather than 6 August as noted on the skis, and confirm that Weselman won the First Amateur Race, and was awarded Mr H L Puckle’s trophy and 15 shillings. Because there were so many participants, there were many heats before the final race, and Weselman completed the course 5 times before he finally won.

Fritz Weselman was described in one newspaper report of snow shoe racing at Kiandra as ‘a Canadian gentleman’ however it is possible that this is an error made in the transmission of the news, as similar reports in other newspapers describe another competitor in the same terms. Early reports of a ‘Fritz Weselman’ appear in Sydney newspapers from around 1890, when a man of that name was investigated and fined for selling liquor without a licence in Balmain. Weselman appears from around 1893 in the colonial press as a miner working various claims around the Kiandra district, notably crushing on the Mons Meg Reef and working the Lobbs Hole copper mine with Jacob Wilson. Weselman purchased the Kiandra Hotel in New South Wales around 1894. Historian Klaus Hueneke notes that Weselman was able to ‘profit handsomely from the influx of people who came to do exploratory work for new mining companies’.  In 1899 Weselman also opened a store in the town. Historian Norman Clarke notes that Weselman’s mining partner Jacob Wilson and Kiandra’s most successful female skiing champion Margaret Yan, who married in 1900, ‘obtained the leasehold’ on the hotel ‘from Fritz and Sarah Weselman’ in 1904. Weselman was an active figure in the local community, including as a member of the organising committee of the Kiandra Snow Shoe Club.

Weselman was also an enthusiastic participant in the snow shoe races organised by the Club. He frequently placed in the downhill races and the jumps competitions.

He was described in one account of the 1900 races, recorded in Norman Clarke’s book, as ‘a magnificently cool rider’. Weselman also made skis and sleighs.

It has been claimed that this is the oldest known set of skis made and worn in Australia, however the Powerhouse Museum in Sydney holds a pair of skis from Kiandra donated in 1895, which were said to have been used by Y Weselman and the Postmaster General’s Department. The pair of skis associated with the Yen family of Adaminaby in the Donald Maclurcan Collection are also dated to an earlier period, probably around 1880. Nonetheless, Weselman’s 1898 skis are amongst the earliest made and worn by a known individual in Australia.

118 years after they carried Fritz Weselman  to victory down Township Hill, these two thin planks evoke the scenes of described by Barcroft Boake in his poem ‘The Demon Snow Shoes (A Legend of Kiandra)’:

The snow lies deep on hill and dale,
In rocky gulch and grassy vale,
The tiny, trickling, tumbling falls
Are frozen ‘twixt their rocky walls
That grey and brown look silent down
Upon Kiandra’s shrouded town.

The Eucumbene itself lies dead,
Fast frozen in its narrow bed,
And distant sounds ring out quite near,
The crystal air is froze so clear,
While to and fro the people go
In silent swiftness o’er the snow.

And, like a mighty gallows-frame,
The derrick in the New Chum claim
Hangs over where, despite the cold,
Strong miners seek the hidden gold,
And stiff and blue, half-frozen through,
The fickle dame of Fortune woo.

Far out, along a snow capped range,
There rose a sound which echoed strange,
Where snow-emburthen’d branches hang,
And flashing icicles, there rang
A gay refrain, as towards the plain
Sped swiftly downward Carl the Dane.

His long, lithe snow-shoes sped along
In easy rhythm to his song;
Now slowly circling round the hill,
Now speeding downward with a will;
The crystals crash and blaze and flash
As o’er the frozen crust they dash.

Can you tell us more about Fritz Weselman and his skiing success at Kiandra? Let us know in the comments section below.