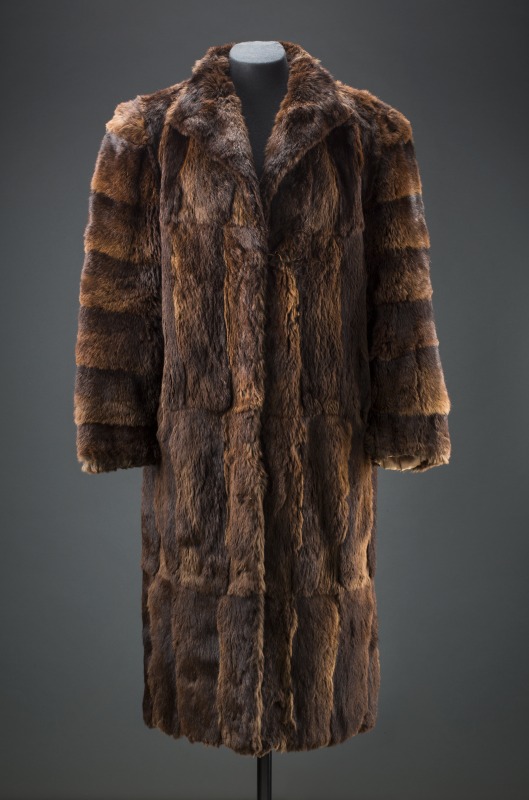 One of the most beautiful objects in the National Museum’s rabbit collections is a woman’s fur coat from the 1940s. Made from the pelts of about sixty strikingly dark-furred rabbits caught near Robe in South Australia, this coat shows how a ‘noxious pest’ could also be valued. Whilst live rabbits continued to devastate the land, during the first half of the twentieth century their skins came to be in demand both here and abroad. With fur then very much in fashion, furriers and their customers looked to Australia’s wild rabbits as a cheaper alternative (and convincing substitute) for the pelts of more exotic animals.

This particular rabbit fur coat was worn and treasured by Flora Mason. Flora received it as a gift from her husband Reg in 1945. With little money to buy his wife a ready-made fur, Reg used his rabbit-trapping skills to provide the raw materials…

This post is the fifth in a series co-developed by Jono Lineen and other curators that explores Australians’ experiences with rabbits through objects in the National Museum’s collections.

Reg (Albert Reginald) Mason was born in 1912 and grew up in South Australia. He first met Flora Martin at Langhorne Creek school, where she was a fellow pupil. Not long afterwards, Reg’s family moved to another town. Twenty years passed before they met again. Flora later recalled: ‘I was a dairy maid and general help … earning £1 per week and keep and Reg was trapping rabbits and living with his sister.’ Reg had found work on a merino property at Cowell, a small town on South Australia’s Eyre Peninsula. In any spare time, he caught rabbits to sell. In 1936, in celebration of South Australia’s centenary and their rabbit sideline, Reg and his brothers Jim and Syd entered a rabbit-covered Dodge buckboard wagon in the Cowell Pageant.

After their wedding, Reg and Flora moved to ‘Mt Ghearthy’, a property near Cowell. Reg worked as a station hand and shearer on an adjoining farm. Flora occasionally provided meals for the shearers and taught sewing at the nearby school for a little extra income. The onset of the Second World War and rationing prompted Reg, Flora and young son Murray to move to Strathalbyn, a less-isolated town close to Langhorne Creek, where second son Graham was born. In January 1942 Reg joined the Australian Imperial Force. First stationed in South Australia, he was later sent to the Northern Territory. By 1944, Flora was looking after three small children – Murray, Graham and third son, David. Flora recorded in her memoirs that in August of that year, Reg had written: ‘… to ask me to try and buy land so that he could apply for an exemption from the army service’. Flora borrowed money from a relative and managed to buy 120 acres of cleared land near Robe, thus making Reg a landowner and farmer. At the time, she was uncertain if this venture would work out. ‘I signed on the dotted line and was very dubious as to how we were to make a living on this small area, and little money left for the purchase of stock and building.’ Still, the plan worked. Reg was discharged from the army in March 1945 and came to join Flora and the children. A generous neighbor offered the family a house in return for Flora looking after and milking cows, and providing the owner with milk, cream and butter. Reg soon found work as a farm hand looking after a perimeter rabbit-proof fence and sheep.

A deal struck with his employer allowed Reg to earn some more money by catching rabbits after work. Eldest son Murray helped check and move 100 rabbit traps each day. Reg operated 300 traps in total. Nothing went to waste. Pelts were dried, graded by colour then quality and sent for sale. Carcasses were cooked up and fed to the pigs. On clearing the traps, Reg carefully saved the very best black pelts with the idea of having them made into a coat for Flora. Murray recalled that finding the right pelts was a lengthy process. Even with so many traps, ‘they were lucky to get one or two, if any black rabbits a day’.

When enough pelts had been collected, they were sent to an Adelaide-city furrier, TC (Thomas Curtis) Hunter for tanning and tailoring. Flora received the finished article before the birth, in December 1945, of her daughter, Barbara Ann.

The coat is a typical 1940s style – calf-length, with a straight silhouette and simple hook and eye closure at the chest. A satin lining ensured the skins did not rub against the clothing worn below. Furs could be worn for day or evening wear, making the coat practical as well as stylish. Flora wore it out to the pictures, dancing, on day trips to the Botanic Gardens in Adelaide, and to meetings of the Country Women’s Association.

The rabbit fur coat was a thoughtful ‘thank you’ present from Reg and a rare luxury for Flora, who had worked hard to make ends meet and look after children whilst her husband was away from home. It is a fine example of the multiple ways Australians have used and valued rabbits: as sources of food, employment, and fur.

Seeing opportunity, trappers and furriers experimented with readily-available substitutes which included Australian native animals such as wallaby, water rat, possum and platypus, but also rabbit and fox. These locally-sourced furs proved just as workable. Most significantly for consumers, they could be had at a fraction of the cost of the ‘real’ thing. Rabbit fur was found to be additionally useful in that it could be successfully manipulated to mask its humble origin.

‘Rabbit skins can be made to resemble the fur of any animal, ranging from chinchillas to leopards, so closely as to deceive all but experts.’

Demand for Australian rabbits from overseas buyers was strong. Millions of skins were exported to North America where they ultimately became furs or felt hats.  Within Australia, large skin buying companies such as Winchcombe Carson and Co. sent instructions to rural newspapers explaining how trappers could best prepare skins. Skins which were removed in one piece, turned inside-out, stretched over wire, dried and packed flat remained wrinkle-free and were of most value to skin merchants and furriers.

Some of these rabbits returned to Australia in a different guise. Slyly promoted as ‘coney fur’ or ‘coney sealskin’ trimmed, chemically processed and dyed rabbit fur coats were sold to wealthy, unsuspecting buyers at significantly inflated prices. For many women, however, rabbits – whether au naturel or as faux mink – represented an achievable way to keep up with the demands of contemporary fashion.

During the Second World War, imported furs were restricted and fur garments, as with other items of clothing, were subject to rationing. Anyone able to catch and skin their own rabbits, however, could take advantage of garment-making services offered by tanneries and furriers. During the 1940s, the Australian National Fur & Skin Co. in Melbourne advertised fur garments in a range of styles and finishes (including ‘shorn coney’) that could be made-up from pelts supplied by the customer. A hand-finished rabbit fur coat – BYO pelts – cost £5.

‘As a young child… my sisters and I, and probably some cousins, wor[e] the coat for dress ups. I recall, in my latter years of high school, early 1980s, going out one cold winter evening. My mother encouraged me to wear Flora’s rabbit skin coat. I [tried] the coat on but don’t think I actually wore it out that night. I was probably too embarrassed as a teenager to be seen wearing my grandmother’s old rabbit skin coat!’

Flora Mason’s rabbit fur coat was donated by Debra Leigo to the National Museum in 2013.